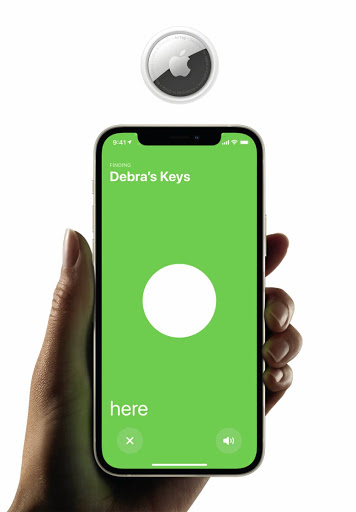 Bluetooth trackers — to help locate the remote hiding deep in the belly of the couch — are not new, but when Apple released its AirTag this year, more people took notice of these nifty little gadgets.

I’ve owned two alternatives — the Tile and Chipolo — but the AirTag is the most appealing.

Apple is good at building its ecosystem of linked devices and apps. The AirTag works with the Find My app, which also tracks AirPods, MacBooks, Apple Watches and iPhones. It can also be accessed using iCloud, which is useful when you want to track a stolen device.

Once you open the AirTag, it activates seamlessly and pairs with the Find My app. Each AirTag is assigned a custom description or emoji. I’ve attached it to my keys as I misplace them constantly. To locate them, I can either ping them or use directions to find them.

The AirTag pairs on any device running iOS/iPadOS 14.5 or later. It has accessibility features for the visually impaired; it works with VoiceOver to read out instructions.

You can attach an AirTag to keys, wallets, luggage, running shoes, pet collars or handbags. But in typical Apple fashion, these trackers do not have a built-in key chain hole, so you’d have to fork out extra for an accessory.

There are delays with shipments of Apple’s leather keyring attachments. They have not yet reached SA and pre-orders are on a backlog, which means customers have to pay a little more for third-party accessories.

The AirTag can only be paired to an iPhone, but Android handsets can scan a lost tag to access the owner’s contact details. (Similarly, Samsung’s Galaxy SmartTag only works with Galaxy devices.)

In June Apple updated the AirTag to address stalking issues. It will ping for between eight and 24 hours if separated from its owner, instead of the initial three-day window at launch.

Apple is playing to its strengths with the AirTag. It’s a slick product that appeals to anyone tied to its ecosystem. It costs R499 for one tag or R1,899 for a pack of four.

Ban on imported cement could result in high prices for ...