The ConceptD 3 Ezel is a two-in-one convertible laptop and part of Acer's high-performance lineup that comes with a built-in stylus and is aimed at creatives like illustrators, video editors and interior designers 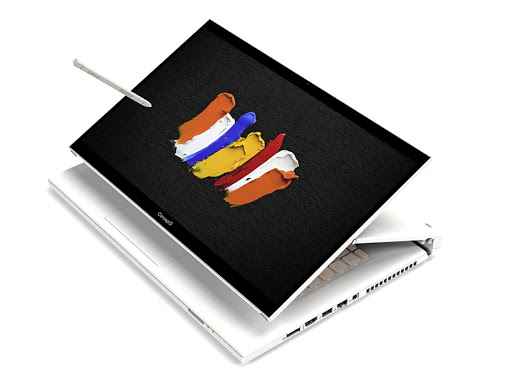 The Acer ConceptD range of laptops we first reviewed during the lockdown has an Ezel variant with a versatile hinge that lets the screen flip outwards.

The ConceptD 3 Ezel is a two-in-one convertible laptop — part of Acer’s high-performance lineup — that comes with a built-in stylus and is aimed at creatives like illustrators, video editors and interior designers.

It also has the next-generation Wi-Fi 6 that’s more efficient, a fingerprint sensor built onto the power button, and a Kensington security lock. Surprisingly, the display has a 1080p screen resolution.

What makes it stand out is the unique hinge for its six convertible modes — laptop, float, share, display, pad and stand.

The screen flips out to 180° so someone sitting opposite you can view your screen — useful for collaborative work environments.

The laptop weighs 1.68kg and has an all-white design with an orange backlit keyboard that cannot be changed. It is a heavy machine but you only feel it when you’re in tablet mode.

The Ezel has a multitouch display that works with the Acer Active Stylus, which is neatly tucked into the base of the keyboard. The stylus has a right-click button, eraser function and a tip with 4,096 levels of pressure sensitivity.

It can be used for digital sketching, animations and 3D modelling, and has a pen-on-paper feel. The laptop has a Pantone-validated display with integrated colour correction and colour matching.

You’ll never run out of power: a quick 15-second charge yields 90 minutes of draw time on the stylus and regular battery life is excellent — you can get a full day’s work on it.

There are various two-in-one laptops on the market, but the ConceptD Ezel is best suited for those who need to do digital illustrations or animations daily. It is trusty but slightly heavy and lacks a 4K display.

With its newest high-end release, the Reno5 5G, Oppo going after Huawei’s premium customers who don’t have access to crucial Android services
News & Fox
6 months ago

AngloGold springs to defence of Ramos as Pityana’s ...