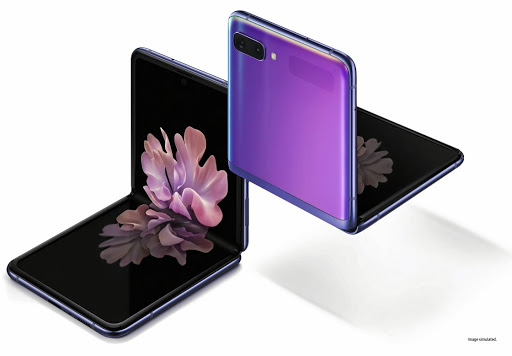 Last year Samsung rushed to market with a proof-of-concept device called the Galaxy Fold. It was meant to showcase where mobile technology is headed. But it failed.

That didn’t stop the company from trying again in 2020 with the folding Galaxy Z Flip. The clamshell falls under the Galaxy Z series that will include future foldables.

The 6.7-inch Z Flip is a statement piece produced in limited quantities. With its SA price tag of R29,999, it is not for the mass market.

The Z Flip is a phone that is meant for taking selfies at every opportunity — when there is an audience. Well, that’s how Samsung has marketed it with brand ambassador Bonang Matheba.

The purple mirror finish of the one we have on review is attractive, but it is also a fingerprint magnet. You have to either slap on a cover or keep wiping it down; I wouldn’t ruin this phone with a cover.

There’s something very satisfying when you snap it shut, which I did all day, perhaps more than necessary. Samsung claims it can withstand more than 200,000 folds without issue.

The phone doesn’t feel flimsy, but I was careful not to drop it. By default, it has a dark wallpaper, which helps so you don’t see the crease of the fold in the centre.

Some apps have been optimised for what Samsung calls "Flex Mode", which looks like a tiny laptop that supports different functions on each half of the 4-inch screen. It works with the camera, gallery, YouTube; you can also open two apps in split-screen mode.

It has two 12MP rear cameras and a punch-hole 10MP selfie-camera. They are decent but not as good as the iPhone 11 or Samsung’s current flagships. It can be propped up for long exposure shots and when the phone is closed, the tiny 1.1-inch notification panel lets you take a square-ratio selfie.

The Galaxy Z Flip is meant to showcase the future of folding phones and Samsung’s second attempt is a move in the right direction. I like having a 6.7-inch phone folded in my pocket, but I’ll wait for the tech to mature before buying one.

The LG V50 ThinQ is the first smartphone with 5G capabilities to go on sale in SA, and it is exclusive to Vodacom
News & Fox
11 months ago

Samsung’s Galaxy S20 Ultra superphone is one of the most expensive handsets in SA, but is it worth it?
News & Fox
1 year ago
Next Article

TECH REVIEW: Unlock your fitness with the RushTushFit app

TECH REVIEW: Conferencing like a pro with the DJI Osmo Mobile 3

TECH REVIEW: Unlock your fitness with the RushTushFit app

TECH REVIEW: Conferencing like a pro with the DJI Osmo Mobile 3

ALLAN SECCOMBE: SA should be taking notes on Chile’s ...