ENTREPRENEUR: How Mabel Akinlabi went from birthdays to big business

A favourite American snack can now also be enjoyed by South Africans, thanks to the efforts of a husband-and-wife start-up 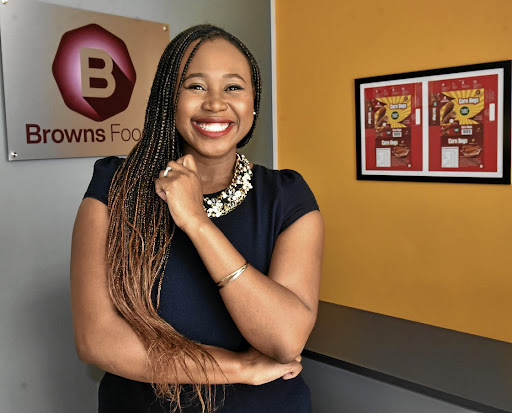 Mabel Akinlabi was hosting her daughter’s 11th birthday party when she came up with the idea of an extra treat, corndogs. Long a part of American cuisine, these consist of a sausage — usually a vienna — on a stick, coated with a thick layer of cornmeal batter and deep fried.

Akinlabi consulted Google for the ingredients and began mixing the batter. Soon she discovered that the corndogs were so popular she couldn’t make them fast enough.

Akinlabi, now CEO of Browns Foods, and her husband, Wale, who is operations manager, have taken corndogs to a new level. Their company, Browns Foods, supplies Browns Corndogs to Checkers stores nationally as well as to other retailers.

The couple have a background in broadcasting. They run a TV station called Urban TV, an Afro youth lifestyle cable channel that Mabel describes as similar to Vuzu and MTV, both youth-orientated channels. Urban TV is aimed at millennials and their successors, Generation Z, and is shown in some African countries.

"I love feeding my family and I couldn’t stop thinking how the children kept asking for more corndogs," says Mabel.

She asked Uber Eats and Mr D which corndogs were available; there were none. "I thought: ‘How is this possible in this day and age?’"

Mabel bought some viennas (they’re always chicken) and yellow maize, made a batter, and using a braai skewer, dipped the viennas in the batter. She made a few corndogs for her husband and for her children’s lunches.

"My children said their friends wanted more. I realised people really like them."

The couple knew they were onto something, but food production and retail were new to them. Mabel’s first stop was the head office of Shoprite, which owns Checkers. She was asked to bring samples, and half-an-hour after she had met the Shoprite buyer, Promise Mpele, she got a call saying the chain was interested.

The Akinlabis struck a deal with Shoprite and registered their company, even though they had no equipment or materials. Wale, who is "fantastic with graphics" says his wife, built a brand identity.

Then the panic started. "We needed money. We took every last cent we had, ordered a fryer from the US and bought some sticks. We realised we couldn’t make the corndogs in our house, because there is so much regulation.

"We asked Checkers to give us a few months to get going, and together with a food technologist we set out to look for small premises," Mabel says.

There is no corndog-making equipment available on the African continent so the Akinlabis found a manufacturer in the US.

"We got people to help develop the batter recipe. It’s easy to make 50 corndogs at home, but when you have to make 50,000 …" The couple had to find a way to make large amounts of batter correctly and to find suppliers.

They needed to find out what price would be fair, which regions the corndogs should go to, which distributors they should use and what consumers like. From single corndogs made on chopsticks, they built their business in the midst of the Covid pandemic.

"We scrounged, begged and borrowed. We couldn’t get government funding because we were nobody yet. We found a facility in Kya Sands in Joburg and ordered equipment. We decided even if we did not have anywhere to live we would make this work," Mabel says.

The couple put off paying their bond for two to three months to divert all their money to the venture. By the end of last year they were supplying more than 100 Checkers stores with corndogs in three flavours.

The couple’s products are available in Checkers, Food Lover’s Market, Pick n Pay and Spar, and they sell them frozen or fresh. Mabel says: "I was involved in sourcing the chicken and the spices. I’m a mom and I don’t want to feed garbage to other children."

The Akinlabis are expanding their offering to Shoprite, which serves lower LSM customers. There, packaging and pricing will be different. A vegan corndog is also being considered.

Mabel says: "If you have a brilliant idea, you should tell someone else about it. That way you make yourself accountable to that person.

"Then it’s out there, so you’ve got to do something about it."

Go-getter runs a company where the goal is to help road-accident victims get top-class treatment, even without medical cover
News & Fox
9 months ago

Tech-savvy and agile: how a small but profitable online retailer moves 600,000 fashion items a year
News & Fox
10 months ago
Next Article