DINNER PARTY INTEL: When the best result is winning bronze 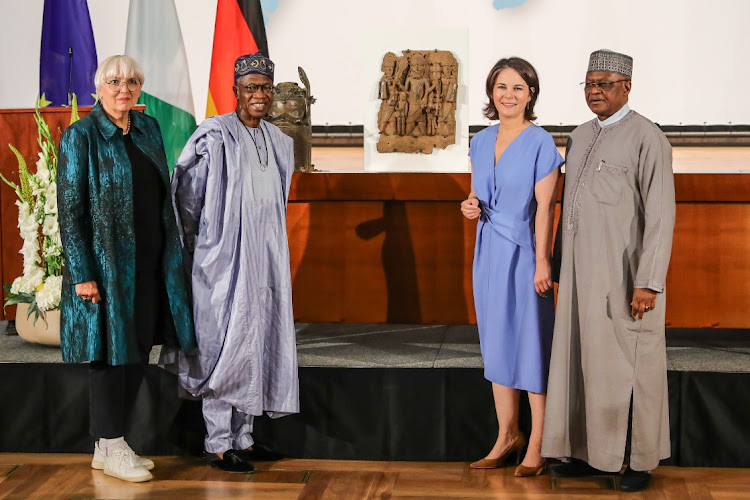 Nigerian and German ministers and officials with the two Benin Bronzes that were returned to their rightful owners last week.
Image: Omer Messinger/Getty

Transnet and its counterpart in Mozambique have signed a rail freight deal that is expected to take about 200 heavy trucks a week off the N4, helping to free up a popular tourism route to the Kruger Park and the delights of the Lowveld.

The agreement will increase capacity for chrome and ferrochrome ore shipments on the rail route from Belfast in Mpumalanga to Maputo harbour.

Nigeria last week welcomed home two of the ancient Benin Bronzes artefacts that Britain looted in colonial times, which ended up in museums around the world. The items  — the head of a king, known as an oba, dating from the 18th century, and an intricately designed 16th-century plaque — were returned by Germany. The culture ministers of Germany and Nigeria met in Berlin to sign an agreement paving the way for the African country to take ownership of the remaining Benin Bronzes in German museums — all 1,100 or so of them.

Miners have unearthed the preserved body of a baby woolly mammoth while digging in the frozen ground in the Klondike gold fields in Yukon,  Canada.

Paleontologist Grant Zazula said the animal, which was about one month old when it died, would probably have perished in mud 30,000 years ago, then been encased in the frozen layer of ground known as permafrost. Woolly mammoths died out 10,000 years ago. A female mammoth was found in Siberia in 2017, but did not have a tail, unlike the latest find.

Pretoria’s Thaba Tshwane military base is one place where you might expect good discipline. Not so, says Major S Bapela of the military police ...
News & Fox
1 month ago
Next Article