Fanning the flames through the internet

As visible as the social media instigators were, Twitter played less of a role than closed WhatsApp groups in launching ‘insurrection’ 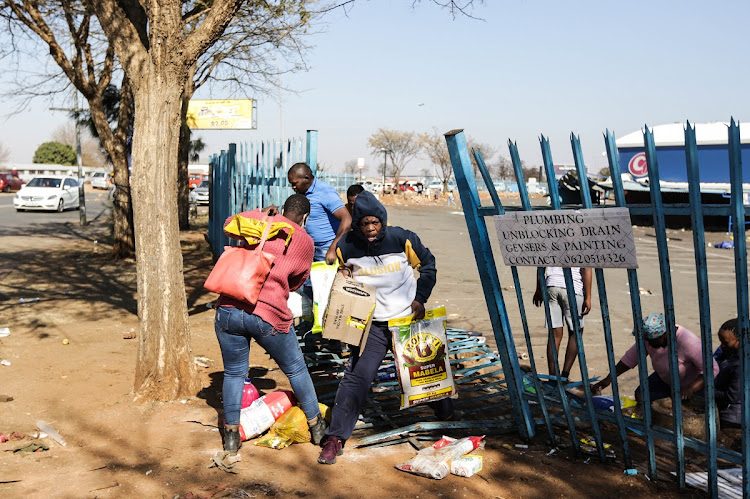 The amplifying role of social media helped fan the flames of devastating riots and looting in KwaZulu-Natal (KZN) and Gauteng, and helped stoke outrage, claims of victimisation and ethnic nationalism.

But it seems like Facebook-owned WhatsApp was the main conduit for organising what President Cyril Ramaphosa called a "popular insurrection".

As extraordinary as the week-long rampage was — ostensibly sparked by "12 agitators" loyal to former president Jacob Zuma — was the role that messaging apps and social media played.

There is no arguing that these apps for communicating can also be used — perversely — for any form of mass organisation, in this instance hugely destructive.

"The riots and looting appear to have been co-ordinated largely via WhatsApp, as one would expect of an attempted insurrection," analyst Arthur Goldstuck, MD of World Wide Worx, tells the FM.

"The ringleaders would not expose themselves on public social media, but would have been confident they would find thousands of useful idiots who would spread the word via both private and public exhortations."

The N3 highway blockades and burnings appear to have been planned, he believes, as were many of the mall lootings, with people knowing hours in advance where the invasions would occur.

"In the powder keg atmosphere that had been created by Zuma’s confrontationalism and brinkmanship, it took a small spark to start a conflagration," says Goldstuck.

Andrew Fraser, an analyst who tracks bot activity on Twitter, also thinks the main instigators used WhatsApp, which has more than a billion users worldwide.

"WhatsApp closed networks are more likely for organisation," he tells the FM. "I think there was likely further organisation by criminal networks, which is what led to the advances into the warehouse areas of Durban."

Twitter provided a window into the agitation — and later showed the remarkable way South Africans fought back against the chaos — with Zuma’s family and motley hangers-on seemingly inciting violence before and after his arrest.

In particular, there were tweets by Zuma’s daughter Duduzile Zuma-Sambudla; a selfie video by her twin, Duduzane, egging on looters (as well as a later one urging people to "loot responsibly"); and the wild-eyed ravings of Carl Niehaus through his own Twitter account, and seemingly also that of the Jacob Zuma Foundation.

The foundation’s account tweeted that "peace and stability in SA is directly linked to the release of President Zuma with immediate effect" — seen by many as proof that it was instigating violence.

EFF leader Julius Malema was temporarily suspended by Twitter for incitement after he threatened to send in his red beret "fighters" if the army was deployed.

Goldstuck thinks Zuma-Sambudla has been "walking a fine line between celebrating violence and calling for it". The closest she came, he thinks, is to agree with calls for a shutdown, while her posts "celebrating a litany of violence across KZN are not only shameful, but also provide powerful moral support to those looting and burning".

Unfortunately, says Goldstuck, Twitter suffers from the "same malaise" that Facebook did until a few years ago, because it does not take complaints from developing countries seriously.

"In other words, it will leap on an offensive comment by an American public figure, while appearing not to care what a public figure in SA has to say. They would argue that they took action against no less than the Nigerian president, and were banned in that country for it. However, they may feel they burnt their fingers there, and are now being overcautious in other African countries."

Still, he finds it "mind-boggling that they are allowing provocation to go unflagged".

Fraser says Twitter is poor at quick interventions in foreign markets. Its artificial intelligence (AI) and human monitoring "lack the necessary context to identify calls to violence in localised idiomatic language or in vernacular".

This can’t be solved by AI systems, he warns. "It requires human intervention by people who have some understanding of the context. As long as this kind of moderation is left to algorithms, or to people in California or Bangalore, there is little likelihood that it will improve."

SA’s tech community applauded a letter by journalist Duncan McLeod to Twitter CEO Jack Dorsey, asking for the suspension of the @DZumaSambudla and @JGZ_Foundation accounts.

Twitter "should be dealing actively with prominent accounts that are deliberately fanning the flames of violence. You are failing to do this, Jack. You are failing SA," McLeod wrote at TechCentral.

Former DA MP Phumzile van Damme also tweeted that these accounts "incited violence". In another tweet, she wrote: "The unrest is trending globally. Violent unrest sparked by disinformation on your platform. Thousands have pleaded for action. Nothing. You have no shame @jack."

Jacob Zuma’s daughter has been his most strident defender, but she is also fuelling the riots on social media
Opinion
10 months ago

Looting and lawlessness in SA have brought the political propagandists, populists and opportunists out into the open. We should publicly decry them, ...
Features
10 months ago

If anything justifies a prison sentence in the Zuma family right now, it is the rabid incitement to violence that the former president’s daughter ...
Opinion
10 months ago

Corruption thrives in a destabilised state with weak institutions. SA cannot be allowed back to that space because there will be no turning back
Opinion
10 months ago
Next Article