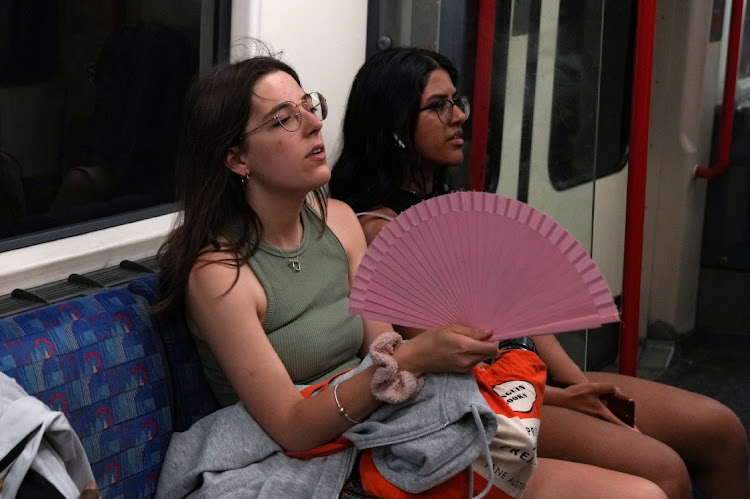 A woman holds a fan as she travels on the London Underground during a heatwave in London, Britain, July 17 2022. Picture: REUTERS/MAJA SMIEJKOWSKA

Britain was heading for its highest temperatures on record and firefighters battled blazes across southern Europe as a heatwave sent people hunting for shade and compounded fears about climate change.

In Spain, a wildfire raced across a field and engulfed a digger near the northern town of Tabara, forcing the driver to run for his life as flames burnt the clothes off his back.

Across that country and some other parts of southern Europe there were some signs conditions were starting to ease after days of blistering highs that have caused hundreds of deaths and left countryside dangerously dry, authorities said.

But the heatwave was moving north. Temperatures nudged 38ºC in southern England on Monday and were forecast to hit a record-breaking 40ºC on Tuesday, according to Britain’s Meteorological Office.

Train companies cancelled services and some schools closed while ministers urged people to stay home and the government triggered a “national emergency” alert.

Flights were suspended at Luton airport after staff spotted a “runway defect”. The hot weather had melted the runway at the Royal Air Force’s Brize Norton air base, Sky News reported.

“We hoped we wouldn’t get to this situation but for the first time ever we are forecasting greater than 40ºC in the UK,” said Nikos Christidis, climate attribution scientist at the Met Office.

“Climate change has already influenced the likelihood of temperature extremes in the UK. The chances of seeing 40ºC days in the UK could be as much as 10 times more likely in the current climate than under a natural climate unaffected by human influence,” he said.

Wildfires raged across Portugal, Spain and France and authorities warned there was a risk of more as tinder-dry conditions persisted.

Spain was facing the last day of a more than week-long heatwave, which had caused more than 510 heat-related deaths, according to estimates from the Carlos III Health Institute.

In Tabara, locals said the digger driver — who they named as Angel Martin Arjona — had been trying to dig a trench between the fire and buildings.

But orange flames surrounded the vehicle. TV footage showed him emerging from the blaze, tripping, then scrambling to his feet as people shouted out to him and a firefighter ran up to help.

The driver was airlifted to hospital with burns, witnesses said, though there were no detailed reports on his condition.

With fires burning thousands of hectares in Galicia, Castille and Leon, Catalonia, Extremadura and Andalusia, Spain mourned the death of one firefighter in the northwestern province of Zamora on Sunday evening.

In Portugal, temperatures dropped over the weekend, but the risk of wildfires remained very high, the Portuguese Institute of Meteorology said.

About 1,000 firefighters, backed by 284 vehicles and 18 aircraft, were battling 10 wildfires, mainly in northern regions, authorities said. Two people died trying to flee the flames in a car in the northern Murca area, media said.

Belgium and Germany were among the countries expecting the heatwave to hit them in coming days.

The EU said it was monitoring wildfires raging in southern member states on Monday, sending a firefighting plane to Slovenia over the weekend adding to recent deployments to France and Portugal.

“We continue … to monitor the situation during this unprecedented heatwave and will continue to mobilise support as needed,” spokesperson Balazs Ujvari told a briefing.

In the Gironde region in southwestern France, the fires had destroyed 14,800ha, local authorities said on Monday. More than 14,000 people have been evacuated from the area. France has issued red alerts, the highest possible, for several regions, with residents urged “to be extremely vigilant”.

In Italy, where smaller fires have blazed, forecasters expect temperatures above 40ºC in several regions in coming days.

Switzerland also suffered the effects of the heatwave. Axpo, the operator of the Beznau nuclear plant, said on Monday it was forced to reduce output so that it does not overheat the Aare River from which it draws its cooling water.

Nearly 240 people died in Portugal between July 7 and July 13 due to the heatwave, the country’s health authority said
World
3 weeks ago

Sweltering Britons buy hoses and pools to cool down, but also … hot tubs