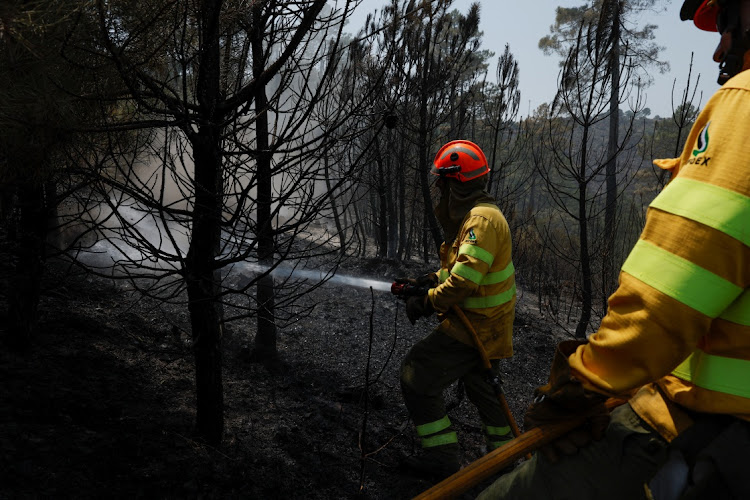 Firefighters from Extremadura work to contain a wildfire in the second heatwave of the year in the vicinity of Riomalo de Arriba, Spain, July 14 2022. Picture: REUTERS/SUSANA VERA

LEIRIA, Portugal/RASLINA, Croatia — Wildfires raged across tinder-dry country in Portugal, Spain, France and Croatia on Thursday, burning homes and threatening livelihoods, as much of Europe baked in a heatwave that has pushed temperatures into the mid-40ºCs in some parts.

Nations across southern Europe — experiencing the second heatwave in as many months — have been hit by a series of wildfires over the past few weeks.

In Portugal’s central Leiria district, tired firefighters battled to control blazes that have been fanned by strong winds. Footage from the area on Wednesday showed smoke darkening the sky and billowing across a highway, while flames licked around the roofs of houses in one small village.

“Yesterday was a very tough day,” Portuguese Prime Minister Antonio Costa said as he attended a briefing with the national meteorological institute IPMA.

“It is absolutely crucial we avoid new events because it leads to the exhaustion of firefighters and all others … who are doing their best to control the situation.”

The most concerning blaze was near the town of Pombal, where on Thursday aircraft and helicopters dropped water on flames that were tearing down a hillside lined with highly flammable pine and eucalyptus trees.

“When it gets to the eucalyptus it’s like an explosion,” Antonio, an elderly resident of the nearby village of Gesteira, said as he anxiously watched the approaching flames.

Across the border in western Spain, a fire that started in the Extremadura region on Tuesday swept into Salamanca province in the region of Castile and Leon, forcing the evacuation of 49 children from a summer camp on Thursday.

Regional authorities said more than 4,000ha of land had been burnt.

Spain’s meteorological agency, AEMET, expected the heatwave to reach its peak later on Thursday, with temperatures likely to exceed 44ºC in large parts of southern Spain.

On Croatia’s Adriatic Coast, firefighting planes swooped low to dump water over burning forests, and troops were called in to help firefighters battling to contain three major wildfires around Zadar and Sibenek.

Arndt Dreste, 55, had moved to the village of Raslina, near Sibenik, this year, after selling his property in Germany. His house was severely damaged by the fire.

“I bought this house in January … I [am] cut off from Germany and this is my life here … it was here,” Dreste told Reuters, showing the charred walls of his home.

In southwestern France, about 1,000 firefighters, supported by six water-bombing planes, were battling two wildfires that started on Tuesday.

“The fires are still not under control,” the local authority for the Gironde department said.

The biggest of the two Gironde fires was around the town of Landiras, south of Bordeaux, where roads have been closed and 500 residents evacuated.

The other blaze was along the Atlantic Coast, close to the “Dune du Pilat” — the tallest sand dune in Europe — in the Arcachon Bay area, above which heavy clouds of dark smoke were seen rising into the sky.

About 6,000 people were evacuated from surrounding campsites on Wednesday, and another 4,000 people early on Thursday.

A study in the journal Nature last week found the number of heatwaves in Europe has increased three to four times faster than in the rest of the northern mid-latitudes, such as the US and Canada

Thousands of people were also evacuated from homes on Turkey’s southwestern Datca peninsula, as a fire that started on Wednesday was fanned by strong winds overnight and threatened residential areas.

The forestry minister said the fire had been brought under control on Thursday after seven firefighting aircraft and 14 helicopters were deployed to contain it.

Scientists blame human-caused climate change for the increased frequency of extreme weather such as heatwaves, which have also hit parts of China and the US in recent days.

A study in the journal Nature last week found the number of heatwaves in Europe has increased three to four times faster than in the rest of the northern mid-latitudes, such as the US and Canada, due in large part to the jet stream air current splitting into two parts for longer periods.

Some Europeans welcomed the heat, however. In Catania, on the east coast of Italy’s Sicily, tourists and locals thronged cafés to eat granita, a frozen dessert, and jumped into the sea to cool off.

“The heat here is a bit tiring, but I think it’s the least tiring thing we face this year, I put up with it gladly,” said Catania resident Pierpaola.

When the music’s over, the tones of melting glaciers will be all that’s left

Indian data shows at least 25 people have died from heat stroke since late March, the highest toll in the past five years
World
2 months ago
Next Article