‘I want you to know how sad I am to be giving up the best job in the world. But them’s the breaks,’ he says in resignation speech at 10 Downing Street 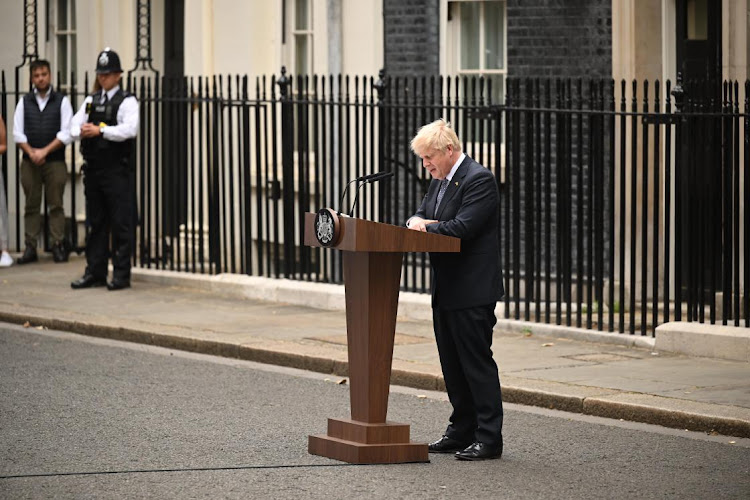 Boris Johnson said on Thursday he was resigning as Britain’s prime minister, bowing to calls from ministerial colleagues and lawmakers in his Conservative Party.

Here is the opening text of a speech he made outside his official Downing Street residence announcing his resignation:

“It is clearly now the will of the parliamentary Conservative Party that there should be a new leader of that party and therefore a new prime minister, and I’ve agreed with Sir Graham Brady, the chairman of our backbench MPs, that the process of choosing that new leader should begin now and the timetable will be announced next week. And I’ve today appointed a cabinet to serve, as I will, until the new leader is in place.

“So I want to say to the millions of people who voted for us in 2019, many of them voting Conservative for the first time: ‘Thank you for that incredible mandate, the biggest Conservative majority since 1987, the biggest share of the vote since 1979.’

“And the reason I have fought so hard in the last few days to continue to deliver that mandate in person was not just because I wanted to do so, but because I felt it was my job, my duty, my obligation to you to continue to do what we promised in 2019.

“And of course, I’m immensely proud of the achievements of this government: from getting Brexit done to settling our relations with the continent for over half a century. Reclaiming the power for this country to make its own laws in parliament, getting us all through the pandemic, delivering the fastest vaccine rollout in Europe, the fastest exit from lockdown, and in the last few months, leading the West in standing up to Putin’s aggression in Ukraine.”

He added: “I know that there will be many people who are relieved and perhaps quite a few who will also be disappointed. And I want you to know how sad I am to be giving up the best job in the world. But them’s the breaks.”

Here are some reactions to Johnson’s resignation:

Keir Starmer, leader of the opposition Labour Party: “It is good news for the country that Boris Johnson has resigned as prime minister. But it should have happened long ago. He was always unfit for office. He has been responsible for lies, scandal and fraud on an industrial scale.”

Senior Conservative lawmaker: “Relief basically. And also sadness at a missed opportunity. A man destroyed by his own fundamental flaws.”

Nicola Sturgeon, Scottish first minister: “There will be a widespread sense of relief that the chaos of the last few days, indeed months, will come to an end, though the notion of Boris Johnson staying on as PM until autumn seems far from ideal, and surely not sustainable?”

Maria Zakharova, Russian foreign ministry spokesperson: “Boris Johnson was hit by a boomerang launched by himself … His comrades-in-arms turned him in. The moral of the story is: do not seek to destroy Russia … Russia cannot be destroyed. You can break your teeth on it — and then choke on them.”

Boris Johnson to resign, stay as caretaker PM until October

Cabinet minister David Wolfson has resigned in the wake of the Downing Street party scandal. It’s a matter, he says, of the rule of law
Opinion
3 months ago
Next Article