Abortion is legal in SA. But bad treatment, stigma, a lack of privacy and long waiting periods at government clinics can drive people to illegal providers. A reproductive health researcher and an abortion doctor explain backroom abortions and what can be done to make it easier to go the safe route instead 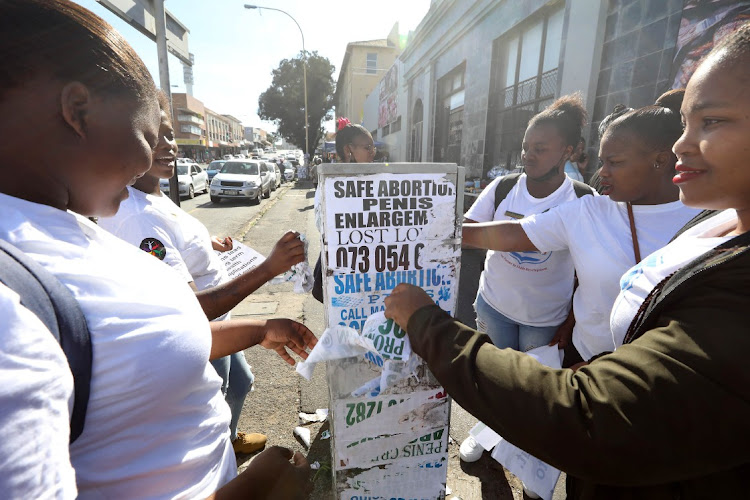 Waiting for the bus? Chances are you will see an advert promising “cheap, fast, pain-free abortions”. Browsing through your local paper’s classifieds you might well spot a similar ad there. Going online? The adverts for abortion services frequently pop up there too.

But these ads are usually not for legit providers — despite abortions having been legal in SA since 1996.

So, why is there a gap for illegal abortion providers? Reproductive health doctor Melusi Dhlamini and Tshinodiwa Ramaite, formerly of Ipas, a reproductive health advocacy organisation, help us understand what goes on behind the scenes.

How would you know if an abortion provider is not legal?

If the person offering an abortion can’t show you these three things, they’re not running a legit service:

Online ads that give a vague or incomplete physical address for the facility, sketchy information on how the procedure works or no contact details other than a cellphone number are red flags that you might be dealing with a fake provider, says Ramaite.

We typed “abortions in Johannesburg” into a search engine and found many websites for facilities that didn’t list their physical address, or showed an address that wasn’t anywhere near where the clinic claimed to be. For example, Sandton’s Women’s Clinic lists “98 Fox Street, Marshalltown, Johannesburg” as its address. But Fox Street is about 20km away from Sandton.

Most of the websites we looked at also had only cellphone numbers and asked people to contact them via WhatsApp. 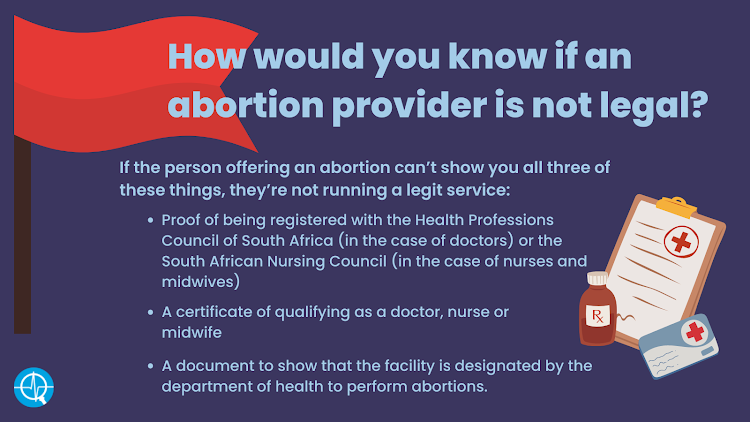 So, why do illegal abortion services keep popping up?

One, because there is a market for termination services. Estimates in a 2020 study show that almost four in 10 unplanned pregnancies in Sub-Saharan Africa between 2015 and 2019 ended in abortion.

Also, fake providers are difficult to catch. Information on illegal abortion providers is scarce and anecdotal, making arrests and prosecution difficult, says Ramaite. “They move around a lot and they change their numbers quite often,” she explains.

Why do people choose to go to an illegal provider?

People mostly go to unregistered, illegal providers because it’s easy to access these services. Women also say they don’t get turned away or get the feeling that they’re being judged.

Nurses interviewed as part of Ipas’s research on how abortion services can be improved said the shortage of trained health workers is an obstacle to safe abortions. And the ones who are available have to brace themselves for being called names like “Lucifer”, “serial killer” or “satanist” because of the work they do. Some state facilities also set quotas for how many abortions they’ll perform in a day, which means women are turned away when the limit is reached.

Confidentiality, privacy and stigma also prevent people from using safe services. “I wouldn’t want to go to a clinic and be seen in the queue that everybody knows is for abortions,” says Dhlamini.

Moreover, women have brought up the fear of judgment and mistreatment by clinic staff as reasons for knowingly opting for an illegal abortion in research interviews.

Why shouldn’t you go to an illegal provider?

Unsafe abortion providers do not adhere to strict hygiene conditions nor are they properly trained. The World Health Organisation (WHO) estimates that in developing countries, 220 in every 100,000 unsafe abortions end in death because of complications.

Dhlamini explains that illegal abortions have a high chance of serious complications, such as the termination failing, being incomplete or resulting in infections, with patients ending up in the emergency room. “If an abortion is not complete, [you will] just continue bleeding,” he says, and this could be fatal. “We've seen people die from infections after an incomplete abortion.”

A 2021 report found unlicensed providers often give clients unidentified pills, claiming the tablets are misoprostol (which is used in medical abortions), or without proper dosage instructions. Ramaite says “some women also experience sexual assault through illegal abortions”, because providers falsely claim that the pills have to be taken vaginally.

Dodgy practices like these can lead to failed abortions, infections and even bleeding or tearing in the uterus.

How can people be encouraged to go to safe abortion clinics instead?

People are more likely to use legit services, if it’s easy to find them, like with the Where to Care map.

Finding facilities that offer safe abortions has proved notoriously difficult. And when people feel desperate, they’re willing to give an illegal, dubious service a go, which studies show are easy to find through ads, either physically or online, or on a friend’s referral.

In surveys about how abortion services can be improved at state clinics and hospitals, women also said they wanted nonjudgmental and empathetic health-care providers, privacy and confidentiality. Moreover, women said not having to wait long in line to see the right health worker was important for creating positive experiences — especially because having to go back to a facility several times meant they had to spend extra money on travel costs and risk facing potential stigma repeatedly. 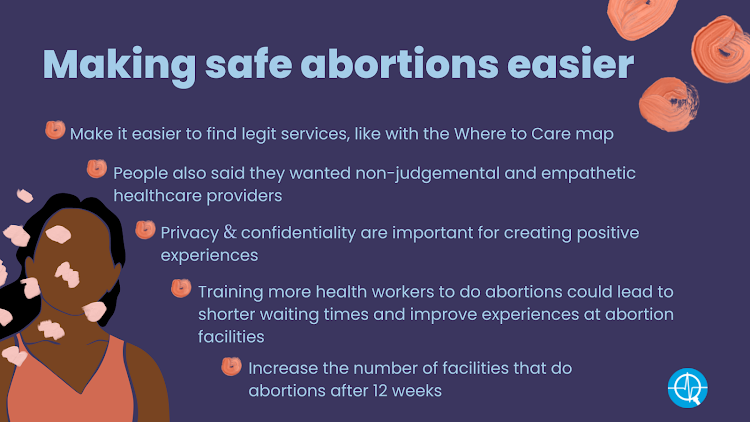 Women’s health researchers and Ipas recommend that teaching health workers to see things from the patient’s point of view can help overcome stigma and prevent judgy attitudes. In addition, helping other staff at the facility to understand why people want to end a pregnancy can lessen discrimination against colleagues who perform abortions.

Abortions 101: Here’s which pills, tools and terms to know if you plan to terminate

The Choice on Termination of Pregnancy Act makes abortion legal in SA. Guidelines from the department of health detail the ins and outs of the ...
News & Fox
1 month ago

Tshinondiwa Ramaite, a gender policy adviser at the reproductive health organisation Ipas, explains how to spot unlawful abortion providers on the ...
News & Fox
2 months ago

Here’s how an abortion works from week 13

By SA law, only a surgical abortion is possible when you’re over 12 weeks pregnant and only a doctor may do it
News & Fox
3 months ago
Next Article

PAUL HOFFMAN: Best bet for SA is an early election and ...

How to use the comments tool on BusinessLIVE