As one of the founders of the intensive-care specialty in SA, this doctor was at the forefront of treatment for Covid-19 patients 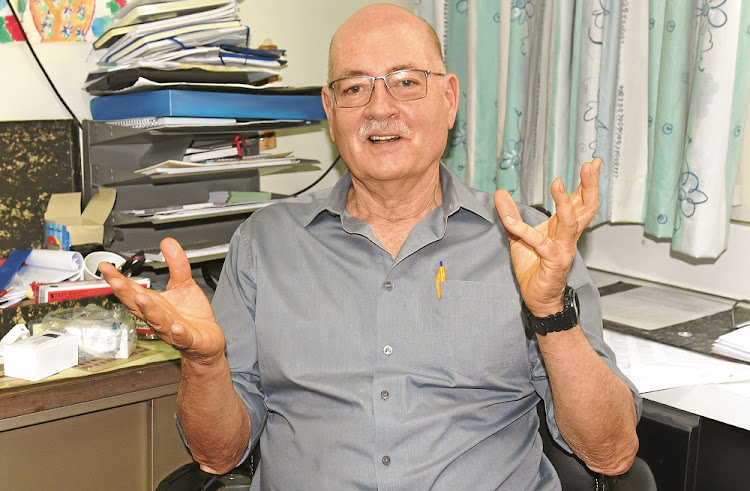 "I want you to understand that I’m not a hero," says Guy Richards, professor emeritus in critical care at Wits University, as he begins a conversation at his office, beneath the sprawling Charlotte Maxeke Johannesburg Academic Hospital.

He played a critical role writing guidelines (or, in medical speak, "treatment protocols") for Covid-19 ICU patients within just two weeks of SA’s first documented coronavirus case. They were so life-saving that Richards was mentioned in a Discovery Health presentation when it unveiled its data on declining hospital ICU mortality rates.

But he credits doctors on the frontline for their care of patients and the tremendous "team effort", sometimes at great personal cost. Hundreds of staff at Charlotte Maxeke became ill with Covid-19 and some landed up in ICU.

Richards is one of a group of "grandfathers", or founders, of the intensive-care specialty in SA, in which specialist doctors, such as anaesthetists, specialise further in critical-care medicine to learn how to bring patients back from the brink of death.

He points out that, while medical TV shows always portray the surgeon doing everything from operating to managing patients in intensive care, "that is not the case, ever". It certainly isn’t how it is supposed to work.

Intensive-care doctors, known as intensivists, ideally should be managing an ICU. One doctor told the FM that critical-care medicine in SA exists partly because of Richards’ work.

The treatment protocols that Richards sent to doctors at the start of the pandemic might sound medical and dull, until you realise how on point they were for a new disease — even as they were updated frequently with new information.

His March 20 treatment guidelines included corticosteroids for the very ill. This is the same class of drug as dexamethasone, which made global headlines in June as the Covid-19 treatment standard for the severely sick.

There is more to Covid-19 treatment than steroids.

But how did Richards and specialist Prof Mervyn Mer, head of Charlotte Maxeke’s adult ICU, know what drugs to use, months before more definitive data emerged?

Years of experience and treating viral pneumonias gave them insight into what to do.

"Having been an intensivist for many, many years, I’m probably just about the oldest," says Richards.

His work speaks to the quality of medical professor SA has. So why wasn’t Richards on the frontline in the state sector?

The government forces its employees to retire when they reach 65 in order to reduce the public wage bill. In October 2018 he was "partly retired", and was given a junior specialist position for a year so he could keep on training SA’s intensivists. Late last year, the government retired him for good.

The government’s strategy means the most experienced professors are often pushed out of a health system that is desperate for their skills.

Richards now works in the private sector and is employed by Wits to teach, do research and consult with doctors.

He is described "as incredibly generous with his time". Doctors send him WhatsApp messages and pictures of patients’ X-rays and monitors for advice.

At Charlotte Maxeke hospital, doctors came to him with questions about managing patients and, he says, this is how he contracted Covid-19, which he later passed on to his wife and son.

Richards has also facilitated outside help for the hospital. Last year, he negotiated with the Roy McAlpine Charitable Foundation for an expanded high-care unit that cost millions.

The foundation also donated 28 high-flow nasal oxygen machines to the hospital in the middle of the pandemic. These machines offer a different way to administer oxygen, and have produced better outcomes than ventilators.

Now with expanded capacity in part due to Covid-19, Mer, who took over running the adult ICU from Richards, "is trying very desperately" to get the provincial health department to employ a specialist intensivist.

Richards trained Gauteng’s intensive-care doctors, but was never given training posts to hire specialists to study under him and had to borrow the funded positions from other medical departments.

"Critical care represents the pinnacle of medical care because all of the other disciplines send their patients to ICU when they get really sick."

Yet, he says, it remains underfunded.

Richards’ expertise may have helped ICU doctors save the sickest people from Covid-19. What SA now needs is training and job posts for more specialists to follow in his footsteps.

For health care to be fixed, the era of politicians overruling scientists must end, this ANC member and medical doctor believes
News & Fox
8 months ago
Next Article

FDI will be litmus test for SA’s progress, says Citi ...