Covid-19 has thrust this property guru into the limelight. He talks to the FM about the future of the sector, the pros and cons of working from home and the power balance between landlords and tenants 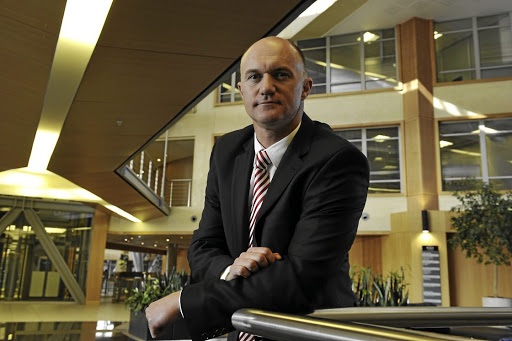 Estienne de Klerk has become the one-stop contact for the property industry at a time when the sector is facing the biggest challenges of a generation.

Listed property is the worst-performing asset class for the year to date, though it has risen by a whopping 25% in the past week. The impact of the pandemic looks set to dampen demand for office space as more people work from home, and SA’s oversaturated retail space will have closures coming fast and furious, with no sense of who will pick up the surplus.

Rental relief packages from property owners to retailers have kicked in, though it’s unclear how long these will last. Property owners offered a 70% discount to retailers for April, though it’s still not clear who is paying rates and taxes. At the same time, valuations will potentially drop and the sector is trying to reconfigure itself into a new normal.

De Klerk is the SA CEO of Growthpoint Properties, the largest listed real estate investment trust (Reit) in the country. He is also chair of the SA Reit Association. But it’s the crisis-driven and recently formed Property Industry Group that has put him at the coalface, primarily because of the battle between property owners and retailers over rental payments.

The Property Industry Group started before the lockdown began, as an informal WhatsApp group with the SA Property Owners Association’s Neil Gopal, the SA Council of Shopping Centres’ Amanda Stops as well as several property owners. It was intended as a point of reference and contact for the industry when they could see what was coming from across the oceans.

"This has exploded into something much bigger than we envisaged at the time," says De Klerk. "When problems arose, somebody had to stand up and pull things together and direct the traffic."

Normally industry participants wouldn’t be able to engage with each other but a special Competition Commission dispensation allows for inter-and intra-industry engagement during these unprecedented times.

This group made the decision to prioritise assisting small, medium and micro enterprise tenants.

The property owners are working on the principle that those who can afford to pay should do so and those who can’t will be helped in varying degrees.

"We’re struggling to get some of the big retailers over the line, but the smaller guys have been unbelievably thankful as to what the industry has tried to accomplish."

De Klerk worked at Investec for about 12 years. After graduating with his BCom Hons, he joined the group’s private banking division where he did his articles and completed his CA.

In 2001, he began working with Norbert Sasse when he moved into Investec’s property division, at a time when Growthpoint and Metboard were very small and externally managed by Investec. Back then, Growthpoint owned nine properties worth about R100m.

In 2007 they orchestrated a management buy-in in an industry-changing transaction, where Growthpoint bought the property asset management and administration business of Investec Property Group for R1.57bn.

Though retail gets more attention, Growthpoint also owns and manages industrial and commercial properties in SA, Australia, Eastern Europe and the UK.

As we talk, children in my work-from-home situation start getting noisy and we get onto the future of office space.

Current thinking is that some office space will become obsolete as more people work from home. De Klerk counters this, saying people have a yearning to work with others.

"A lot of innovation comes out of the office environment with people discussing problems and concepts. If you don’t have that interaction, I believe you lose a lot of that innovation. Businesses recognise that and legislated social distancing will translate into additional office space requirements."

If you work from home the hours can be extreme. De Klerk is a case in point. Recent events have led to an abnormal workload and he says his wife sees him less when he works at home than from the office. The work/private life divide has been removed.

He sees real estate as a cornerstone of the economy. But he is concerned about its medium-term future.

"The reduction in interest rates will not benefit the property companies in the short term. The interest rates on their debt are mostly fixed. So I think some measures will have a very limited impact."

He says its pointless dropping interest rates if the supply chain is closed.

De Klerk believes the property industry shoulders much of the work that should be done by municipalities.

Property companies are building traffic intersections and infrastructure required for existing and new areas. Yet property rates have increased 318% since 2008, according to MSCI.

"It’s had a huge impact on the margins in the industry and has affected the feasibility of investment into new real estate. There’s been a big drop-off in development and that doesn’t bode well."

Bad policies have also had an impact, as has emigration.

So are there any positives from recent events? Possibly the fact that the industry is working together as a collective. "There’s no doubt the crisis has brought business and government closer together and I think it all boils down to relationships and working towards common goals."

He doesn’t agree with the notion held by many retailers that they’ve effectively been held to ransom on the back of relentless higher increases. "I would say they’ve always had all the power. The significant impact of administered costs has also created this negative impression. The rental in a retail centre is ultimately determined by trading density or trade per square metre."

He says rental rates in SA are lower than those internationally and the quality of SA developments are world-class.

"Due to shortening lease lengths tenants can renegotiate these levels back to market quite often. Growthpoint’s average lease length is now three-and-a-half years."

The bulk of administered cost increases is from local government through rates and electricity increases and water is a cost that is still expected to rise.

"Cost of occupation has increased for retailers, but most of this increase has been imposed by local government and not the property owners."

De Klerk is married with two children. He plays squash, as does Sasse.

Property industry calls for relief on rates and tariffs

Dis-Chem goes to war with landlords

Retailers at odds with landlords over what constitutes essential goods

Listed property on a downhill run

Property industry calls for relief on rates and tariffs

Dis-Chem goes to war with landlords

Retailers at odds with landlords over what constitutes essential goods

Listed property on a downhill run