‘Backyarders’ and people living in informal settlements have borne the brunt of job and livelihood losses as a result of the pandemic, and have found it hardest to recover 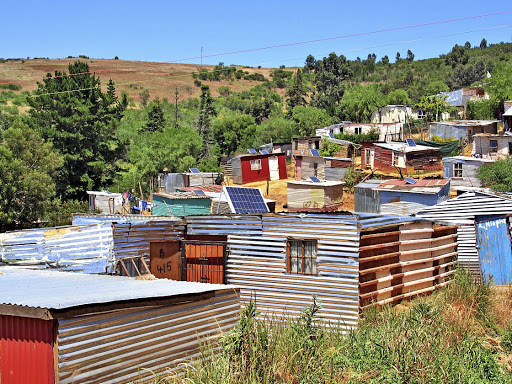 It’s difficult to imagine how the misery could get much worse for families living in makeshift shacks on the Cape Flats during the winter storms each year, when it’s blowing a gale, the ground has flooded and the temperature has plummeted. Yet new evidence from the Nids-Cram survey shows that it is these residents — those living in informal settlements and backyard dwellings — who suffered the biggest hardships over the past 12-15 months.

This is the plight of almost one in six households in SA’s cities and towns — close to 4.5-million people.

They faced the biggest slump in jobs and livelihoods under the hard lockdown, and their recovery has been the most muted. As a consequence, almost half of all shack dwellers went hungry at some stage over the past year.

These communities also faced higher risks of Covid contagion due to their overcrowded living environments, poor ventilation and restricted access to clean water and sanitation. They also indicated that people in their communities were least likely to wear masks in public, increasing the chances of infection.

To make matters worse, as many as one in three shack residents said someone in their household had been receiving the social relief of distress (SRD) grant — but that was withdrawn at the end of April. With level 4 lockdown restrictions recently reimposed, and people’s ability to earn a living and feed their families curtailed, it seems an out-of-touch, uncaring move by the government.

The Nids-Cram findings underscore the ways in which the pandemic has increased spatial inequalities. They also show how the poorest communities are most vulnerable to Covid containment measures — and least equipped to cope with the economic fallout.

We analysed the Nids-Cram survey data for urban areas to unpack the differences between suburbs, townships, shack dwellings (informal settlements and back-yarding) and peri-urban areas (smallholdings, farms or tribal land).

The contrasting circumstances of these communities are clear (see graph below). Asked if anyone in their household had experienced hunger in the previous seven days because there was not enough money for food, nearly one in four shack-dwellers (23%) said someone had gone hungry in April/May 2021. The rates were slightly lower for residents in peri-urban areas (21%) and townships (18%), and significantly lower for suburban residents (6%). 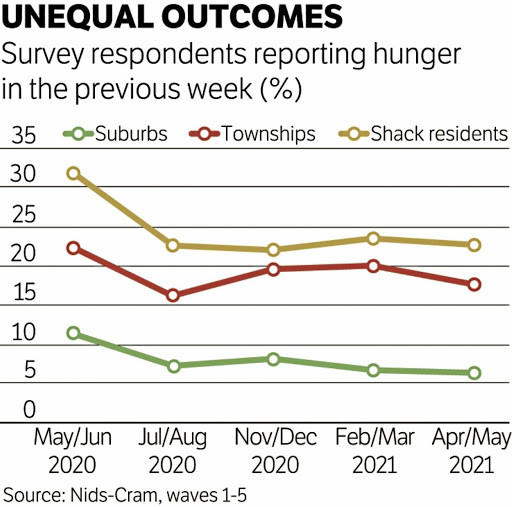 The predicament facing shack-dwellers and other poor urban communities underlines a dilemma for the government: should it intensify the lockdown to slow the rates of infection, safeguard the health system and save lives? Or is a more selective and nuanced approach possible — one that targets hotspots and high-risk sectors, with suitable compensation for those most affected, while safeguarding jobs and incomes elsewhere?

Unfortunately, the communities most at risk of resurgent infections can least afford the restrictions on activity and movement needed to prevent them. Yet there are a range of complementary interventions worth considering to support these communities.

First, serious thought should be given to reinstating the SRD grant for another 12 months. This would help to relieve the misery of joblessness and hunger, and demonstrate that the government cares about the plight of marginalised groups.

Second, the hazardous conditions in informal settlements and backyard shacks warrant more concerted attention. Improved access to fresh water, decent sanitation, electricity and waste collection are obvious priorities, preferably using local labour to enhance skills and livelihoods. A more comprehensive process of upgrading settlements should be the next objective. This could include the readjustment of dense settlement layouts and the building of two-to three-storey dwellings to make room for service infrastructure, community spaces and local enterprise.

Third, government needs a more decentralised, place-based dimension in its disaster management approach. National departments need to work hand in hand with local and provincial authorities to refine and tailor the response to the specific situations in different places. Greater flexibility is required to address the tensions and trade-offs surrounding people’s lives and livelihoods in a more sensitive and effective manner.

Finally, the battle for people’s hearts and minds cannot be won by national directives and authoritarian controls. Widespread fatigue and complacency surrounding social behaviours such as mask wearing, social distancing and vaccine hesitancy require new ideas and fresh thinking. More widespread consultation, community participation and involvement of local leaders and civil society organisations could inject renewed energy and momentum into the campaign to get people to take appropriate precautions and to get inoculated.

Covid has hit SA’s poorest the hardest. But it has also highlighted avenues for policy reform

The fact that SA is an estimated 1.3-million vaccine doses behind schedule — simply because it doesn’t vaccinate on weekends — only prolongs the ...
Features
3 months ago

As many as 750,000 pupils in SA have not returned to the classroom this year. That’s about 500,000 more than in prepandemic years
Features
3 months ago

Women suffered a large and disproportionate effect in the labour market as a result of the hard lockdown, but they’ve also been slower to recover
Features
3 months ago
Next Article

TOBIE VAN HEERDEN: Treasury may now have facts it ...

TOM EATON: Kidnapping as a heart-warming exercise in ...