Between March 27 and August 17, the government banned the sale of tobacco products in SA. It’s a move that has had some positive long-term health consequences — but it has also come at a very high economic cost. For one, the sales ban didn’t prevent many smokers from purchasing cigarettes on the illicit market.

These are some of the findings from wave 3 of the Nids-Cram survey, conducted among a broadly representative sample of South Africans in November and December 2020. The survey focused on cigarette smoking; the use of other tobacco products and nicotine delivery devices was not included.

Assuming that some of the latter group also stopped smoking, the percentage of quitters varies from 7.9% to 15.3%.

Based on self-reported consumption, the total cigarette market at the start of the ban was about 19.6-billion cigarettes a year. This number understates actual consumption — which is probably closer to about 25-billion — because people tend to underreport consumption of harmful products such as tobacco and alcohol. 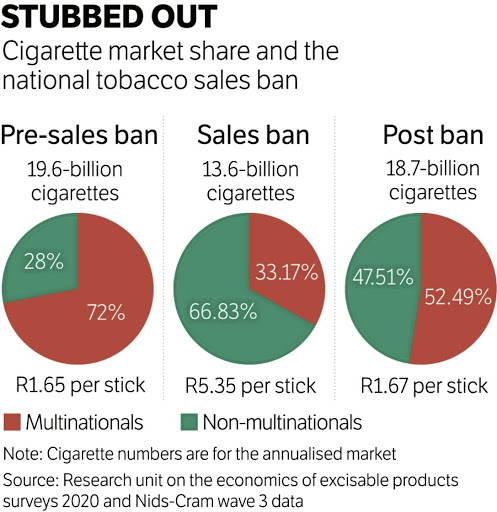 Total expenditure on cigarettes increased from an annualised R32.1bn before the sales ban to an annualised R72.9bn at the peak of the ban, before falling to R31.3bn after the ban.

Not that the government benefited from the price peak. The National Treasury had originally budgeted that R15bn would be collected from tobacco excise taxes in the 2020/2021 financial year. Instead, the 20-week sales ban cost the government an estimated R5.8bn in forgone revenues.

After the ban was lifted, the multinationals’ market share recovered to a much-reduced 50%.

Books such as Johann van Loggerenberg’s Tobacco Wars and Dirty Tobacco by Telita Snyckers, as well as testimony led at the Nugent commission of inquiry into the SA Revenue Service (Sars) show clearly that there are no angels in the industry. All tobacco companies — multinationals and local firms — have been accused and/or found guilty of various kinds of wrongdoing.

But the nonmultinationals — which have previously been found to sell cigarettes at prices that cannot possibly include the full tax due to Sars — benefited disproportionately from the ban. Because there were well-established distribution channels into the informal and/or illicit markets already in place, it seems that the sales ban entrenched that market.

The work of Sars and law enforcement agencies in fighting the illicit cigarette trade has, as a result, become substantially more difficult.

Our research indicates that the tobacco sales ban, and especially the continuation of the ban beyond the initial five-week period, was an error.

Rather than banning the sale of tobacco products, the government could have achieved a similar decrease in smoking prevalence by imposing a sharp increase in the excise tax on tobacco products.

The tobacco industry would argue, self-interestedly, that such tax increases would stimulate the illicit market. But the sales ban in effect made the entire market illicit.

Sharp increases in the excise tax, accompanied by effective track-and-trace measures (which have been implemented successfully in countries such as Kenya and Turkey), would have yielded much more revenue and encouraged more smokers to quit. Consumer behaviour is, after all, affected more by long-term price trends than short-term aberrations.

More than 2-million South Africans found work between June and October 2020, according to the latest round of data from the Nids-Cram survey. But ...
Features
4 months ago

Despite a bounce-back in jobs, child hunger in SA has persisted. Grants are a huge help, but SA also needs a healthy economy to be able to address ...
Features
4 months ago

Women have been hit harder by the Covid-19 crisis, but are less likely than men to receive unemployment benefits
Features
4 months ago

Faced with concerns about Covid fatigue in 2021, the government needs to improve its communication
Features
4 months ago
Next Article