SA’s early childhood development sector has staged a recovery — but it’s not yet back to its pre-Covid levels. A longer-term strategy for the sector is crucial 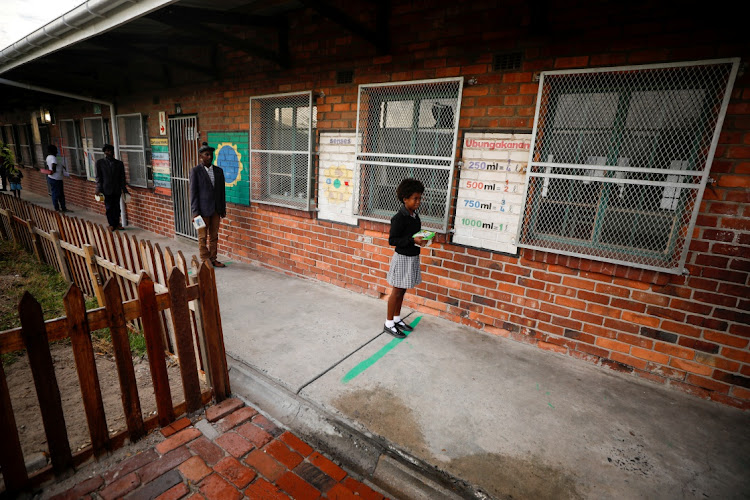 As the Covid-19 panic set in last year, early childhood development (ECD) programmes in SA were instructed to shut their doors along with schools on March 18. By the third quarter, when many pupils had returned to school and the economy was reopening, the ECD sector remained largely inactive.

Despite a July 6 high court judgment allowing ECD programmes to operate with immediate effect, most had not opened between mid-July and the end of August.

Possible reasons for this include an initial lack of communication about when ECD programmes could operate, the prohibitive costs of meeting Covid-19 standard operating procedures, depleted finances after months of not collecting fees from caregivers or parents, and parents’ fears of children contracting Covid-19 at ECD programmes.

The ECD sector was indeed "hanging in the balance", as we discussed in our earlier research. It was unclear then if the collapse in ECD programme attendance would persist, or if a recovery would occur.

Using data from wave 3 of the Nids-Cram survey, we have been able to update trends on ECD attendance up to the period of early November to mid-December.

Our paper highlights a significant recovery in the sector from the third to the fourth quarter of 2020. Among those Nids-Cram respondents living with children aged 0-6, 28% of those interviewed in November/ December reported that at least one child was attending an ECD programme (that is not grade R) in the previous seven days.

This is up from at most 7%, during the wave 2 interviews, conducted between mid-July and mid-August. 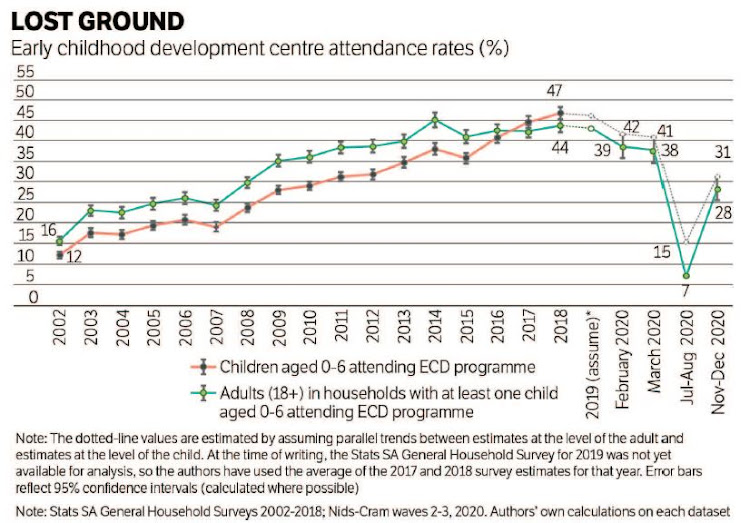 Despite this notable recovery, however, ECD attendance had not returned to pre-lockdown levels (39% in February 2020) by the fourth quarter of 2020, and it remained lower compared with prior years.

This is still lower than Stats SA’s General Household Survey, which suggested 47% of children aged 0-6 were attending ECD programmes in 2018.

Interestingly, the partial recovery in ECD attendance occurred before the rollout of a government stimulus package targeting the sector. A largely informal ECD sector may have been able to bounce back on its own, buoyed by significant recovery in the labour market and caregivers returning to the workplace.

However, various external factors may also have spurred the reopening of the sector. For example, various nonprofits and philanthropic groups took action to support centre reopenings. Additionally, uncertainty around government support in the form of subsidies was reduced after an October court judgment requiring the payment of government subsidies owed to registered ECD programmes.

The ECD recovery from quarter three to quarter four of 2020 is certainly good news. But viewed in relation to longer-term trends, there is no room for complacency about the level of support still required in the sector — or the deep reforms necessary, if national goals for universal access to quality ECD are to be achieved.

As the country faced a second wave of Covid-19 infections and a return to an adjusted level 3 lockdown, this is likely to have stalled a further recovery in the ECD sector in quarter one of 2021.

It is also probable that the lockdown and the pandemic have not only suppressed access to ECD, but have also negatively affected the quality of programmes, as operators struggle to collect fees from parents or caregivers. For example, child-practitioner ratios may have been affected by staffing cuts across programmes; or the nutritional content of food provided at programmes may have been affected by reduced turnovers.

The government’s recently announced ECD stimulus package is a significant and commendable effort by the department of social development to support the short-run needs of the sector, and it will undoubtedly bring much-needed relief to flailing programmes. Nevertheless, the need for strategic medium-to longer-term plans to improve funding and administration, and in turn improve the quality of ECD services, remains imperative.

*Wills and Kika-Mistry are from Stellenbosch University; Kotzé is from the department of basic education

More than 2-million South Africans found work between June and October 2020, according to the latest round of data from the Nids-Cram survey. But ...
Features
2 months ago

Despite a bounce-back in jobs, child hunger in SA has persisted. Grants are a huge help, but SA also needs a healthy economy to be able to address ...
Features
2 months ago

Women have been hit harder by the Covid-19 crisis, but are less likely than men to receive unemployment benefits
Features
2 months ago

Faced with concerns about Covid fatigue in 2021, the government needs to improve its communication
Features
2 months ago