Despite a bounce-back in jobs, child hunger in SA has persisted. Grants are a huge help, but SA also needs a healthy economy to be able to address this problem 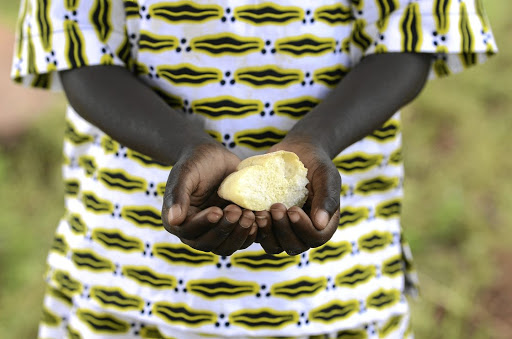 SA’s poverty levels remained stubbornly high immediately after the transition to democracy, before declining for almost a decade after the turn of the century — something economists asbscribe largely to the rollout and expansion of the child support grant.

This expansion, however, subsequently lost momentum, coinciding with weaker economic growth in the wake of the Great Recession of 2008/2009.

Before the pandemic, child hunger tracked these poverty trends. This much is clear from the Stats SA General Household Survey, which for two decades has included a question about whether a child or children in a household have gone hungry at any time in the previous year because there wasn’t enough money for food.

The number of households reporting that this occurred at least occasionally halved from 35% in 2002 to 17% in 2007, before the recession hit. Child hunger then rose with the recession, before declining gradually to 16% in 2019.

But reported child hunger doesn’t convey the full picture of child nutrition. There is a less regular measurement of stunting among young children, which compares children’s height-for-age with an international norm. This phenomenon is far more persistent — and grants haven’t had the same dampening effect on stunting as they had on child hunger prior to the pandemic. 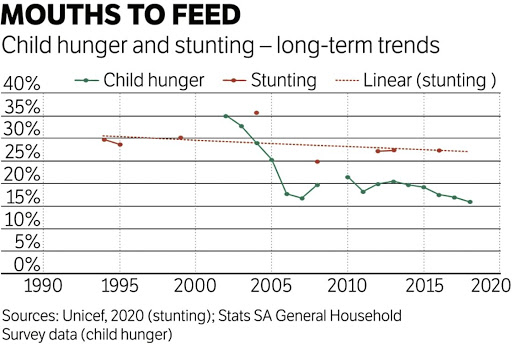 In SA, the combination of the pandemic, the lockdown and international recession hit an already fragile economy, and constrained the government’s options for responding.

The first wave of the Nids-Cram study in May and June showed that food insecurity had intensified.

In 2019, only 16% of households with children indicated that a child or children had gone hungry at least sometimes in the year before. But 15% of respondents in the first wave of the Nids-Cram study answered yes to a similar question relating to just the previous week.

This implied roughly a doubling of child hunger in the first part of the lockdown relative to the previous year. Simply put, child hunger had returned to levels last seen at the beginning of the century.

At the same time, the survey also found that grants had shielded many households from deeper poverty, especially where household members had also experienced job losses or been furloughed.

Top-ups to social grants, paid from April to May, and the introduction of two new grants were a significant part of the government’s response to poverty.

According to the survey data, the grants were much more effective in improving food security than the government’s food relief, because they were better targeted.

By the second wave of the Nids-Cram survey, in July and August, the grants — together with some improvement in the economy and a less stringent lockdown — had helped to reduce child hunger to 12%.

However, the last grant top-ups were paid in October. (The social relief of distress grant, or SRDG, which was due to come to an end in January, has been extended for three months.)

We do not have evidence that the end of the top-ups was responsible for child hunger increasing in November and December to 16% — when wave 3 of the Nids-Cram survey was in the field — but it clearly didn’t help.

This rise in food insecurity was surprising, given that a substantial recovery in the job market had improved economic conditions for some. But continued financial stress on many vulnerable households may have worsened shortages of money to buy food, as well as households’ ability to respond by using accumulated savings or borrowing.

Entering the pandemic’s next phase, we must ask: with the grant top-ups ended and the SRDG set to fall away by May, what are the prospects for children’s food insecurity?

What it means: More grants and more liberal grant benefits are needed, but that will be hard to sustain in this economic climate

It’s hard to be optimistic. An economy’s ability to provide adequate social safety nets is limited by the size of the holes in the nets, and by its fiscal scope.

The gaps in SA’s security net are wide, especially due to unemployment — the introduction of the temporary SRDG recognised that. In addition, households that are already mainly dependent on grants struggle to escape food insecurity.

More grants and more liberal grant benefits are needed, but are difficult to sustain in an economy that shrank by 7% in 2020.

While social grants must remain a major plank in our antipoverty strategy, they cannot completely substitute for a healthy economy.

At the same time, it is hard to tell people there is no money when they are bombarded daily with information about leakage in government budgets due to corruption.

On the whole, child hunger is likely to remain high after the pandemic (if we soon enter such a state).

But, unfortunately, it is only the tip of the iceberg. Stunting is also likely to become more pervasive. Its cumulative effects on children’s long-term human capacity and economic prospects should remain an important policy concern.

More than 2-million South Africans found work between June and October 2020, according to the latest round of data from the Nids-Cram survey. But ...
Features
5 months ago

Faced with concerns about Covid fatigue in 2021, the government needs to improve its communication
Features
5 months ago

Women have been hit harder by the Covid-19 crisis, but are less likely than men to receive unemployment benefits
Features
5 months ago