Hands off our grants

The constitutionally unlawful social grant distribution contract between Sassa and CPS threatened the welfare of millions of SA’s most vulnerable. This was no passport to life-enhancing financial inclusion. Instead, it trapped grant recipients in a spiral of indebtedness 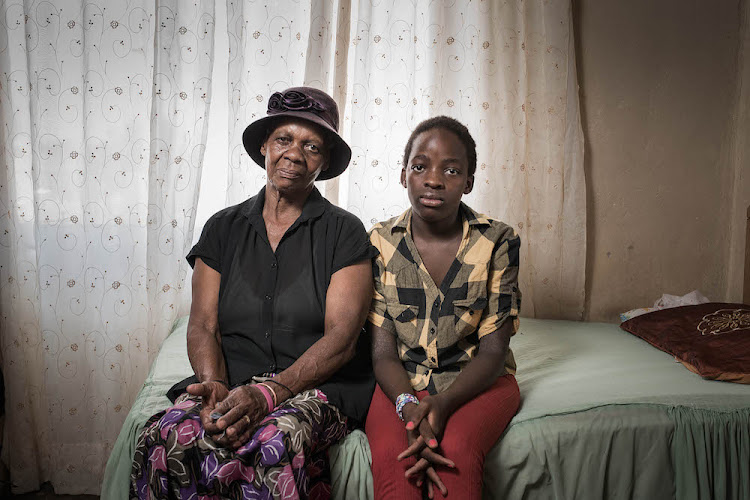 Social grant recipient Maolaotse Grace Bonokwane, pictured with her granddaughter, was refunded for airtime deducted from her Sassa-branded bank account without her permission. PICTURE: THOM PIERCE

This story officially begins in 2012, when the SA Social Security Agency (Sassa) entered into a contract with Cash Paymaster Services (CPS), a subsidiary of fintech company Net1 Applied Technology Holdings.

At the time, many in the investment community regarded the Net1 business model as the holy grail of banking — an opportunity to bank the unbanked. Internationally and in SA, there was a drive within the financial services industry for greater “financial inclusion” of the poor. And Net1 appeared to be the forerunner.

The company’s operations through CPS — particularly the Sassa contract — were to become its bread and butter. CPS delivered social grants to more than 3.5-million beneficiaries in the Eastern Cape, Limpopo, KwaZulu-Natal, Northern Cape and North West. Net1 then leveraged this, selling microloans and life insurance products, on behalf of registered underwriters, to Sassa cardholders receiving social grants.

The idea wasn’t new: Net1 had first proposed it in 2009, in its “first wave/second wave” approach to expanding into new markets. In its “first wave”, it said it would “identify an application for which there is a demonstrated and immediate need in a particular territory and then sell and implement our technology to fulfil this initial need”.

In this phase, it would generate revenue from its software and devices, as well as transaction fees, maintenance services and the use of its biometric verification engine.

Once a “critical mass” of customers had been reached, Net1 aimed to used its infrastructure “to provide users, at a low incremental cost to us, with a wide array of financial products and services for which we can charge fees based on the value of the transactions performed”.

When CPS was awarded the Sassa contract in 2012, the model became key to Net1’s earnings and growth.

At the start of the contract, CPS facilitated the collection of grant beneficiaries’ and recipients’ personal data and opened about 10-million Sassa-branded Grindrod Bank accounts. The account included debit order and USSD facilities, and the bank card had an embedded chip that could function offline and which stored the personal and biometric data of the user.

As part of Net1’s “second wave”, its subsidiaries marketed and sold an array of financial products to grant recipients. The embedded chip on the bank card provided access to their personal and biometric data, and facilitated debit order and USSD deductions. But Net1 subsidiaries — including Smart Life (life and funeral insurance), Moneyline (microloans) and Manje Mobile (prepaid airtime and electricity) — accessed the same smart card reader. When grant beneficiaries put their cards into the card readers and placed their thumbs on the biometric scanners, their bank account history and other personal information were made available.

Things were looking good for Net1: investor enthusiasm saw the share price surge from R58 in 2012 to R165 by early 2015. But the reality for beneficiaries — evident from conversations taking place in the snaking queues of grant recipients on the first day of every month — was starkly different.

It quickly became apparent that the new system was not a passport to life-enhancing financial inclusion. It was a hook to trap recipients in a spiral of indebtedness and, in a disturbing number of cases, facilitate apparently fraudulent deductions for services they never purchased.

One of those beneficiaries was Maolaotse Grace Bonokwane (Ma Grace), a pensioner living in the small grain-producing town of Makwassie, 270km southwest of Joburg. In November 2013 she saw R99 had been deducted from her Sassa-branded bank account for airtime. In December 2013, R50 was deducted, and a further R99 was taken off in January 2014. A month later, she received an advance request for airtime.

With the help of the Lebaleng community advice office, Ma Grace went to the local Sassa office. There, officials blamed her relatives for requesting airtime, and made no further attempt to resolve her query.

The advice office then approached the CPS helpline. The cellphone number for Ma Grace’s airtime deductions, it turned out, didn’t belong to anyone in Ma Grace’s household. Still, the CPS agent insisted Ma Grace had provided the number on the application form for her bank card — something she denied.

It was only at a meeting between civil society organisations, beneficiaries and government in February 2014 that Bathabile Dlamini, then the minister of social development, instructed Sassa to refund Ma Grace with immediate effect.

Though Ma Grace’s case took months to resolve, it did officially open the door to recourse and refunds.

EasyPay Everywhere cards were aggressively marketed and accounts easily opened — from the boots of cars, at private residences, in community halls and churches

More time-consuming was the process to end the Sassa-CPS contract, which the Constitutional Court had ruled invalid in 2013. It would take seven years to expunge Net1 and its subsidiaries from the social grant system.

By 2015, with the appointment of a new Sassa grants payment service provider looming, Net1’s Moneyline, in partnership with Grindrod Bank, launched the EasyPay Everywhere (EPE) account, or “green card”.

Now, CPS agents working at Sassa pay points were also salespeople for Net1’s basket of financial products. An agent signing up a grant beneficiary for an EPE account had automatic access, via a card chip, to their personal information. EPE cards were aggressively marketed and accounts easily opened — from the boots of cars, at private residences, in community halls and churches.

Recourse, however, was almost impossible: there were no walk-in branches near beneficiaries; the call centre service was mostly available in English; inquiries were often cut off due to insufficient airtime; and beneficiaries were placed on hold indefinitely, or their calls went unanswered.

To make matters worse, Sassa officials were unable to deal with EPE queries, as they had no control over the system.

In desperation, some beneficiaries visited a Net1 office in an attempt to obtain a statement or close their account. This often involved travelling long distances, as there were only 120 such offices in SA, and they weren’t allowed family or civil society support once inside.

By 2017, Net1 had signed up about 1.95-million beneficiaries for EPE bank accounts; by 2020, it was estimated that more than 2-million grant recipients had opened EPE accounts.

Had it not been for NGOs such as Black Sash — which in 2013, for example, launched the Hands Off Our Grants campaign to resolve the unauthorised, fraudulent and allegedly unlawful debit deductions — millions of SA’s poorest would have remained vulnerable to the determination of corporates to “bank the unbanked” at any cost.

The eventual contracting of the SA Post Office as social grants paymaster took place in 2018. Under that agreement, social grant recipients were transferred to a special ring-fenced bank account allowing no debit order, EFT or USSD deductions, thus protecting social grants from unauthorised and unlawful debits.

As for CPS, Sassa’s auditors estimate, even without full access, that the company may have understated its profits by about R800m, bringing its total profit to well over R1bn. Today, it is in liquidation, with the SA Revenue Service claiming more than R1bn in unpaid tax.

* Black Sash is a human rights organisation advocating for social justice in SA. This is an edited extract of Hands Off Our Grants: Defending the Constitutional Right to Social Protection (Best Red), available at scholarly bookstores or from blueweaver.co.za

Sipho Bani from Nyanga, Cape Town, received a monthly old-age pension of R1,140. In September 2015, he noticed he had been paid only half his grant. As it turned out, a total of R1,843 had been deducted from his Sassa-branded Grindrod Bank account between May and September of that year. 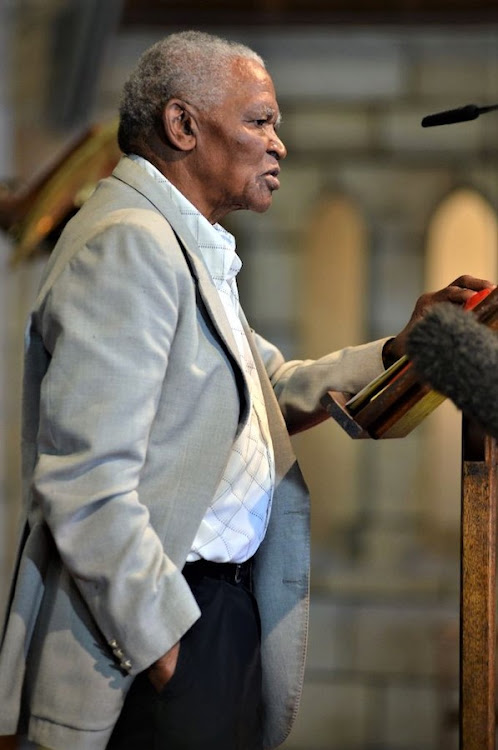 Little recourse: Sipho Bani was sent from pillar to post when trying to inquire about an unauthorised deduction from his Sassa-branded bank account. PICTURE: BLACK SASH

When Bani tried to find reasons for these “loan” deductions, he was sent from pillar to post. He started at the Sassa office in Nyanga, from where he was sent to the Gugulethu Sassa office. From there, he went to the Gugulethu paralegal advice office, the CPS office in Lansdowne, Finbank in central Cape Town and, finally, to the Sassa provincial office.

In all, he spent R400-R500 on airtime, taxis and petrol trying to resolve the issue.

Bani’s case exposed the absence and inadequacy of the Sassa recourse and refund system, controlled by CPS. After a presentation to the Western Cape legislature was reported in the media, Black Sash received a call from the head of marketing for Mercantile Bank. Later correspondence showed Faj Financial Solutions in Kariega (Uitenhage) had made the monthly deductions from Bani’s account in error: it had captured an incorrect digit in an account number.

Bani was refunded his money — but only in part. 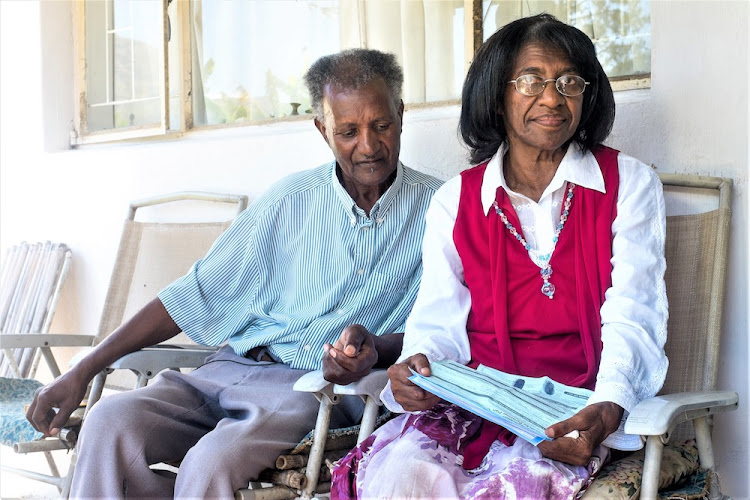 Out of pocket: Jacob and Dorena Juries raised awareness about deductions on the accounts of Sassa beneficiaries in Franschhoek. PICTURE: BLACK SASH

In November 2014, Black Sash’s Bukiwe Lakey was surrounded by Sassa beneficiaries from the Franschhoek area. They were desperate to stop a 1Life funeral policy deduction from their Sassa-branded accounts.

According to the beneficiaries, a broker from Emerald Wealth Management had told them that Sassa and the minister of social development had instructed beneficiaries to take out 1Life funeral policies. Despite being told that they already had funeral policies, the broker apparently still demanded their IDs and proceeded to complete application forms for them.

They were then told to pay their first policy instalment over the counter at the post office, after which payments would be debited from their Sassa accounts. Only, the first instalment was also deducted from their bank accounts.

Doreen and Jacobus Juries exposed the unauthorised funeral policy deductions in “Grant Grabs”, on investigative journalism programme Special Assignment. Soon after the episode aired, the Jurieses said two Emerald agents arrived at their home. The two were very intimidating, and claimed to be former police officers. They apparently said that while the Jurieses could cancel the funeral policies to stop the deductions, they were not entitled to a refund of the instalments already paid.

1Life subsequently refunded the 18 Franschhoek beneficiaries and tabled an apology. A further 21 cases were also stopped and refunded, and the insurer terminated its relationship with Emerald Wealth Management.

With unemployment at 46.6%, it’s no surprise millions rely on welfare. But will the state be able to end the Covid grant?
Special Reports
4 months ago

KELLE HOWSON: The battle for the future of the R350 grant

There are fundamental tensions between the different visions for social protection held by the Treasury and the social development department and ...
Opinion
2 months ago

A welfare state will collapse public finance and the narrow business sector that exists, writes Isaah Mhlanga
Opinion
4 months ago
Next Article