Despite it being all about local government, many residents of Etwatwa on the East Rand did not know who their ward councillor candidates were. Instead they voted for a party they felt they at least knew 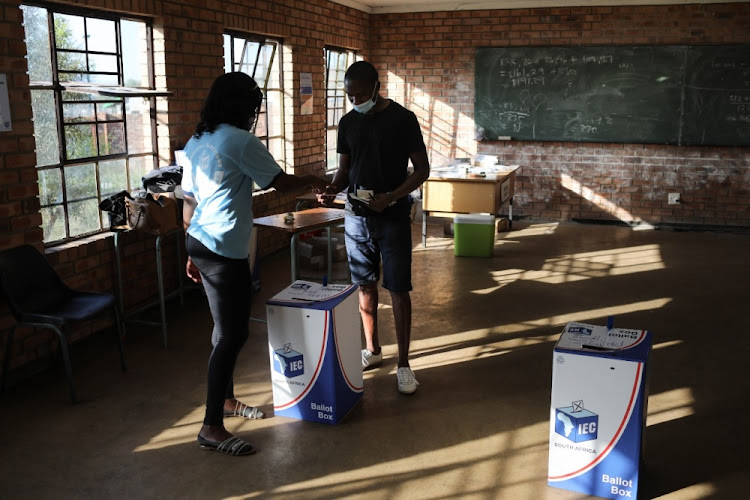 At Phandimfundo Secondary School, a voting station for residents of Etwatwa, Ekurhuleni, the queue for water was longer than the queue to vote. A shaky drive down the uneven road showed people making their way to collect water with everything from vans and wheelbarrows to waste bins and grocery carts. The ANC and DA dominated the gazebos near the entrance.

Etwatwa had been without water for four days owing to a burst pipe. Water tanks had been sent, but supplies were scarce and many residents prioritised getting water over voting. In places like Bester, where there was still water, residents were charging people R5 for 20l.

Busisiwe Zwakala, 67, limped from her home in Etwatwa Section 27 to Sazakhela Primary School in Barcelona on a crutch to vote because she couldn’t afford the taxi fare. She has arthritis and her feet are swollen and dry. She was draped in an ANC sarong featuring a photo of Nelson Mandela.

“There has been no water since Thursday or Friday. You can see I am using a stick, so to get water I have to pay someone. There is a lot of pushing and shoving in those queues for water … I only got one 20l [container]. How must I flush the toilet?” she asked. Despite this, she said she would still vote for the ANC.

Zwakala said she was born into the ANC and has never let go, just like her mother and grandmother. She recently got an RDP house, which she shares with her husband, and hoped that her vote would bring them new roads. “I get my grant money, I can go to the clinic, I have a house, so why would I change my vote?” she said.

Sarita Sibiya, 37, opted to vote rather than stand in a queue for water. She registered for a home in 2004 but her application has not been approved. For this reason, she felt that water was not the most pressing issue. “There is corruption, and I want to change that. We have no houses. None of us have homes, but we vote each election and there is no difference,” she said.

A lesson in voting

Sibiya has three children. Her eldest is in matric while her youngest is a few months old. She lives with her mother and seven siblings, nieces and nephews in a household of 15 people. Some of her siblings have finished school, but they are unable to find jobs or bursaries to further their studies.

She chose to vote to set an example for her children. “Next time we will not vote, we will stay home and that will be worse because what will we be teaching our children?” she said. “I have to fight for my children. If I sit at home, I am saying that I agree with what is happening in this country. I am choosing for myself what I want, and I am teaching my children because they are still young. If I don’t vote, I am teaching them not to fight for themselves.”

Sibiya said there is no library for children to study in ward 109, and the lack of a police station or municipal customer care office means residents must travel far to certify documents or get help from the municipality. “In this ward, there is no park, there is nothing. There is no sport being played so it’s painful, because our children are growing up in a way [that exposes them to drugs].”

She said the residents need recreational activities and leaders who prioritise the upliftment of everyone. “We just want whoever wins to work for the community because we have trusted them with our votes. And they mustn’t go according to family relations, they must help all of us instead of hiring their family members but still letting us use our last cents to print CVs.”

Tholakele Mabena, 54, said she is generally discouraged by politics. “Our parties are disappointing us, not only mine but all parties. They are not fixing things and even if they do, projects end up halfway or incomplete, including tar roads and a nearby school here,” she said.

Mabena thought the water issue might have been caused by sabotage, with the saboteurs trying to swing votes for their candidates. And this, she said, is why candidates should focus on the people and not cause hardship for them.

“Despite their differences, if they focused on the people and gave them what they wanted and fought with themselves afterwards, that would be better. But they fight among themselves and sabotage each other, so we suffer as the people,” Mabena said.

Mthokozisi Mahlangu, 43, no longer lives in Barcelona, though his family still do. A regular voter, he said the youth need to create a vision for themselves and match that to a party that represents their ideals. He said they had no excuse to avoid the polls.

“If you don’t actively get involved in the transformation of your environment, things will stay like that for a long time. So if you stay away from voting, that means someone else is making a decision. There are independent candidates and parties so you are not short of choices. Our youth need to change their mindset,” Mahlangu said.

By 3.30pm, the voting station was relatively empty, with few young people coming in.

Over at the Makause shack settlement in Germiston, there was a heavy police presence. The voting queue snaked all the way out to the main road, where there were ANC and EFF gazebos. Makause has no electricity and a generator would be needed to provide light inside the voting station once it got dark.

Khanyisa Mookamedi, 20, was voting for the first time. She was one of the only young people standing in the queue in the gathering dark. She moved from Limpopo with her family and has been living in a makeshift shack with them.

Mookamedi said she was convinced to vote by “what is happening in the country” and felt she knew enough to make a sound decision. Like many others in the queue, she did not know any of the candidates and was simply voting for a party.

“There aren’t enough campaigns to attract us to come and want to know more about politics,” she said about voting apathy among the youth. “A lot of us are not interested because we don’t know or care.”

This article was first published by New Frame.

The ANC and DA’s loss of support in the local government elections suggests an electorate disillusioned by SA’s bigger political parties. The era of ...
Features
6 months ago

The uncomfortable truth for the ANC is that, if anything, it deserved to do far worse than it did
Opinion
6 months ago