The Post Office, facing a loss of R2.5bn and owing R543m to its pension fund, can no longer afford to pay retirement fund or medical aid contributions 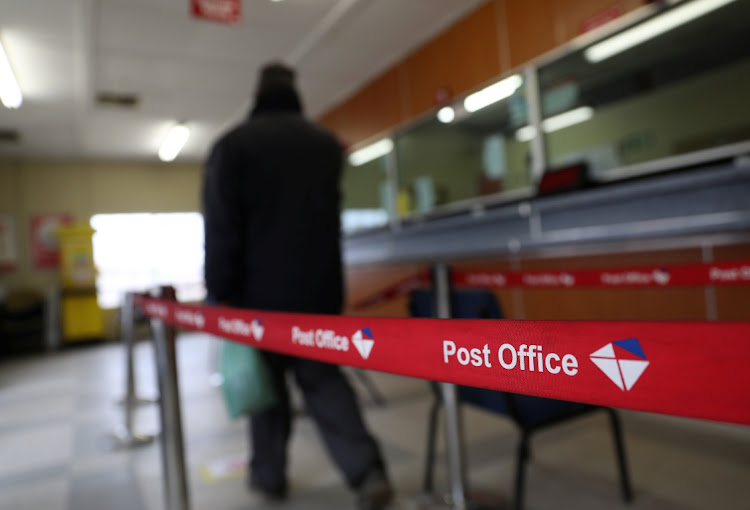 A customer arrives at the Post Office in Pimville, Soweto. Picture: REUTERS/SIPHIWE SIBEKO

Medical aid for Post Office employees could be suspended unless the struggling company comes up with a plan to resume contributions. Contributions to the pension fund have also suffered as the Post Office battles with a massive loss.

In its corporate plan for 2021-2024, the Post Office projected a loss of R2.5 billion for the 2020/21 financial year. Its financial position was dire prior to Covid-19 which has been exacerbated by the pandemic, the report said.

Creditors, medical aid contributions, pension fund contributions and Sars obligations remained unpaid and “will continue not to be paid unless urgent financial assistance is provided”.

Post Office spokesperson Johan Kruger confirmed to GroundUp that the company had been unable to pay monthly contributions to the pension fund or to the medical aid fund. He said revenue during the Covid-19 lockdown had dropped, and the Post Office had prioritised employees’ salaries.

On 9 October 2020, MEDiPOS Medical Scheme, which provides medical aid to Post Office employees, warned that the scheme would stop providing cover if arrear medical aid contributions were not paid by 31 December.

In December 2020, MEDiPOS principal officer Thabisiwe Mlotshwa told members that a deal had been struck. The first payment from the Post Office had been received and although there was still a significant amount outstanding, the scheme would no longer suspend benefits. “[The Post Office] has presented a proposal on clearing the outstanding contributions owed and the scheme will continue to engage with [the Post Office] to ensure the outstanding amounts are brought up to date and that you continue to enjoy the benefits offered by the scheme and for which you have paid,” Mlotshwa said.

Kruger said the Post Office had been able to pay part of the medical aid backlog after deciding to “pay the cash portion of employees’ salaries in full and to hold back on pension and medical contributions as an interim measure”.

In this way, Kruger said employees would “remain members of the pension and medical aid schemes and retain their benefits”.

But Mlotshwa told GroundUp that, although the Post Office had promised to pay monthly contributions again from November, the scheme had only received one payment for November 2020 “with partial payments for other months”.

She said the Post Office owed R582m to the scheme as of September 7. Asked whether members might lose benefits, if the negotiations did not succeed, she said “the benefits might be suspended depending on the outcome of the engagements”.

Communication Workers Union secretary-general Aubrey Tshabalala said only that the Post Office had committed to pay the pension fund and medical aid benefits. “However we are still waiting for the confirmation of the pension fund payments for all.”

“The failure to pay these debit orders has dire consequences on the livelihood of workers,” he said.

Kruger said the Post Office had put plans in place to improve its revenue. He said revenue was up on last year, though still below target, and spending was down.

Asked whether employees would still receive their full pension payout on retirement, given the Post Office’s financial position, Kruger said: “The employees’ pension capital remains invested in the pension fund. The fund shows good growth and employees will receive the full amount available to them on retirement.” The fund is a defined benefit fund, which means members get a guaranteed amount on retirement, as opposed to a defined contribution fund where members pay a defined amount but payouts depend on the growth in the fund’s investments.

Kruger said the Post Office is in regular discussions with the medical aid scheme and pension fund in order to “manage the situation”.

* This article was first published by GroundUp.

Opposition parties don’t like the idea, seeing it as a drain on national finances when Sapo’s own board should be leading plans to make it sustainable
National
1 year ago

AYABONGA CAWE: Small-parcel delivery does not have to be a dog eat postman situation

The separation of the subsidiary’s finances has been more complicated than expected, MPs told
National
1 year ago

The SA Post Office cannot be trusted to deliver packages — yet wants protection from courier services. It’s a bankrupt mess
Opinion
1 year ago