It's paved with good intentions, but as the saga of the Chibok girls demonstrates, a noble campaign can cause unforeseen harm 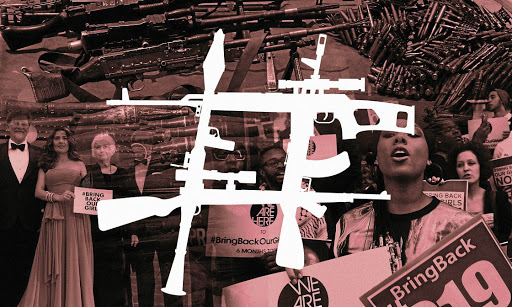 If you’ve been following the saga of DA Western Cape leader Bonginkosi Madikizela, who has admitted to lying about his qualifications on his CV, you’ve probably had occasion to ponder the law of unintended consequences.

There are three types of unintended consequences, but the one that should interest us here is called the perverse result, which Wikipedia tells us has a "perverse effect contrary to what was originally intended … when an intended solution makes a problem worse".

Interestingly, the man who popularised the concept, sociologist Robert K Merton, also came up with the terms "self-fulfilling prophecy" and "role model", both of which could be applicable to the saga of the falsified CV.

Actually, Madikizela has not in fact admitted to lying on his CV, but in a breathtaking display of applied euphemism, to "not correct[ing] the information on his bio". According to Eyewitness News, Madikizela said in mitigation for claiming a fake degree (a BCom in human resource management) that it was indeed true that he did not finish his BCom degree, but that "it is not a requirement for political office in SA".

So lying just for the fun of it is not a lie, we are prompted to conclude, but a waste of time, and you should be allowed one free pass for being an idiot.

The DA has a record of demanding that ANC politicians who lie about their degrees be suspended — think, for example, of the imaginary doctorates claimed by SA’s ambassador to Japan, Mohau Pheko, and ANC veteran Pallo Jordan. So, putting its white monopoly capital where its mouth is, the party swiftly suspended Madikizela.

But it was now open hunting season on the DA, led by the wistfully named Good Party. Every time I read that name, I’m irresistibly reminded of the comic book character Wendy the Good Little Witch, and her sidekick Casper the Friendly Ghost.

The Good Party’s leader is Patricia de Lille and its secretary-general is Brett Herron (this sentence is unrelated to the one preceding it, I hasten to add).

When the Madikizela furore started, Herron decided it was time to expose some alleged CV embellishments by the DA’s chief whip, the recently knighted Sir Natasha Mazzone. In a tweet, Herron evoked the law of unintended consequences to defend his interrogation of Mazzone’s apparent claim to have "legal qualifications", saying it was a result of internal leaks intended to sway the DA’s mayoral elections.

"[The] DA qualifications scandal is [its] own doing. They leaked Madikizela’s lie. Questions about Mazzone’s qualifications arose only because yesterday at least two of her public profiles were edited."

Herron said Mazzone’s "updated Wikipedia biography listed two universities as her alma maters, but her highest academic qualification as matric. Her profession was altered from ‘advocate’ to ‘none’."

Unfortunately for Herron, his timing was a little off, as his attack on Mazzone coincided with the death of her father.

She tweeted: "Let me explain how sick a person can be. On the morning that my father dies, Brett Herron decides that I will be too weak to fight his lies. Thing [sic] again you sick and damaged man. You are a lying, trouble-making political scoundrel. You are exactly where you belong."

This triggered a bit of a groundswell of support for Mazzone, and allowed her supporters the ammo with which to lambaste the Good Party.

Herron denied the accusation and extended his sympathies, but as many have learnt before him, you can’t put the tweet back in the bottle.

I’m not so much interested in the resolution to this fight, as I am in the way social media interventions sometimes have very different effects to the one intended.

At the end of February, CNN reported that hundreds of schoolgirls had been kidnapped from the Government Girls Secondary School in the town of Jangebe, in northwest Nigeria.

A source described the kidnapping: "They came on about 20 motorcycles and they marched the abducted girls into the forest. The bandits arrived around 1.45am and they operated till about 3am."

Two weeks prior to this, gunmen had "abducted 42 people, including 27 students, from the Government Science College Kagara in Niger state. The students, teachers and family members are still being held."

And in December last year, 344 students were abducted from another school in Katsina State, and eventually released.

I can’t imagine the terror experienced by the people kidnapped in these incidents, but a recently released book about the kidnapping of 276 teenage girls from Chibok, Nigeria, seven years ago this month, provides some insight.

The book, by reporters Joe Parkinson (now a Joburg resident, the internet tells me) and Drew Hinshaw, is titled Bring Back Our Girls: The Untold Story of the Global Search for Nigeria’s Missing Schoolgirls, and here’s a description from an interview with the authors on National Public Radio in the US.

"The Boko Haram used physical and psychological torture. The girls were threatened and beaten. They were lied to, told their parents had been killed, that nobody cared. Just to be able to eat and survive they were made to feel they needed to give in to the demands to convert to Islam and marry a Boko Haram soldier. Those who refused were given smaller food rations and were forced to do manual labour, like repairing roads, or assist with medical care, helping with childbirth and treating the wounds of the soldiers."

Twitter took the plight of the Chibok schoolgirls to its saccharine, black heart, "with millions (including Ellen DeGeneres, the Rock, the pope and Michelle Obama) tweeting calls for their freedom with the hashtag #BringBackOurGirls", Parkinson and Hinshaw write in a recent piece in The Washington Post.

There was much mockery of this slacktivism, and they describe how US deputy national security adviser Ben Rhodes, during a meeting in the White House situation room, expressed bewilderment over what impact the hashtag could have: "Even if it hits a billion tweets, do we think Boko Haram is going to throw up their hands and say, ‘OK, we let the girls go’?"

And the hashtag came and went, as hashtags do, and the internet moved on to the ice bucket challenge.

But the law of unintended consequences kicked in.

"Before the hashtag, the main effort to free the Chibok girls consisted of a few dozen dads revving motorbikes down a lonesome dirt road, carrying a handful of crumpled bank notes to buy the freedom of daughters they ultimately failed to locate," Parkinson and Hinshaw write.

"After the hashtag, seven foreign nations poured billions of dollars … into a four-country search zone to free a group of ordinary teenagers transformed by social media into a central prize in America’s global war on terror. Boko Haram became an internationally known entity and soon forged an alliance with the Islamic State. An economy of ransoming schoolchildren emerged, and Nigeria has seen five mass abductions totalling almost 1,000 students in the past year."

Essentially, a hashtag intended to do good instead built a business model for Boko Haram and others "hoping to replicate the multimillion-euro ransom that ultimately freed 103 of the Chibok girls in two exchanges in 2016 and 2017".

One can’t help feeling that the politicians who recklessly air their turgid grievances on social media, vitriol-signalling (to riff on virtue-signalling, one of the bits of jargon favoured by the culture wars warriors) to their supporters, should also beware the law of unintended consequences.