Much of the breathless reporting of UCT lecturer Lwazi Lushaba’s now-infamous political science lecture is based on 12 seconds of a 55-minute video. Context is everything 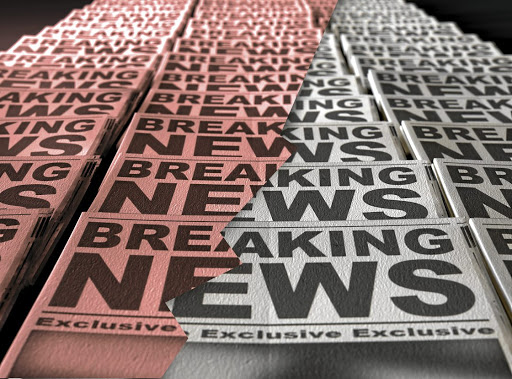 "TimesLive has seen a 12-second clip of the video." My heart sank when I read this sentence, embedded in the middle of a story titled "UCT Launches Investigation into Academic’s Lecture on Adolf Hitler".

That relatively measured headline was marred by one important factual inaccuracy — Lwazi Lushaba’s lecture was not "on Adolf Hitler". Hitler was simply used as an example in a lecture about the evolution of the discipline of political science.

According to TimesLive, selectively quoting out of context: "In a pre-recorded lecture shared online with first-year political science students, Lwazi Lushaba, a lecturer in the department of political studies at the institution, said: ‘Hitler committed no crime. All Hitler did was to do to white people what white people had normally reserved for black people.’"

TimesLive’s parent publication, the Sunday Times, decided to make Lushaba its "Mampara of the Week", writing: "His logic, like that of all mamparas, is scrambled and hard to follow. Lwazi Lushaba … claims ‘Hitler committed no crime’. Reason? ‘All Hitler did was to do to white people what white people had normally reserved for black people.’ So, Doc, two wrongs in your world do make a right, right?"

Seriously, what is wrong with some of our newsrooms? Do they just exist as a stealth marketing project for Helen Zille’s new self-help business book, Go Anti-Woke or Stay Broke?

This isn’t breaking news, this is breaking news. As in, damaging people’s trust in journalism in pursuit of the quick click. You’re basing what is effectively an accusation of Holocaust denial on a 12-second clip cut out of an almost 55-minute video.

Of course, other interested parties — interested in scoring political points, that is — soon jumped on the bandwagon. The DA’s chief whip in charge of the party’s world-class "cancel culture for good" programme, Sir Natasha Mazzone, said "the DA will lodge a complaint against … Lushaba with the SA Human Rights Commission following his racist comments regarding Adolf Hitler".

I’ve watched the lecture, and I can’t find that anywhere. The journalist literally seems to have made that up.

Lushaba’s lecture starts with a statement of intent, one which could apply to what I’m saying here about the state of journalism. "We want to read the course against its own self-understanding. So we are showing to the discipline its blind spots."

The journalists who are so eager to label Lushaba as, at the very least, a Hitler sympathiser, are writing from their own blind spots. Even worse: they are writing without taking the time to do even the most superficial investigating.

I must believe they didn’t bother, as if they had, and they’re still writing these stories, then they’re idiots and it’s time they moved on to being government spokespersons.

If Lushaba was denying the existence of the Holocaust, he would deserve to be censured in no uncertain terms. But the import of his lecture, in order for it to make sense, actually depends on there having been a Holocaust.

If Lushaba was denying the existence of the Holocaust, he would deserve to be censured. But the import of his lecture depends on there having
been a Holocaust

He clearly says: "As soon as [Hitler] came into power, he began exhibiting fascist tendencies. More explicitly, Hitler began killing Jews. We remember him now for the Holocaust."

You’re probably aware of Godwin’s law of Nazi analogies, which states that "if an online discussion (regardless of topic or scope) goes on long enough, sooner or later someone will compare someone or something to Adolf Hitler or his deeds, the point at which usually dampens discussion."

Evoking Godwin’s law has become a way for people to sneer at those for whom the example of Hitler is top of mind when thinking about crimes against humanity, or fascism, or bad facial hair.

I dislike that intensely. It’s a kind of intellectual snobbery, as if to say: "Your knowledge of history is shallow and irrelevant." It denies people the opportunity to situate their lived experiences on a historical continuum, based on the premise that they don’t know enough history for their opinion to count.

Lushaba’s use of Hitler as a metaphor is appropriate. His lecture is about the evolution of political science as a discipline, and Hitler is used as a metaphor for how the "legal institutional approach" of political science in the first half of the 20th century changed only when it was forced to confront the fact that "institutions are populated by human beings", and depend on the agency of humans and how they interpret the law.

He drew an example from the US, of how "the very same law may be interpreted by people differently … There was never a law enacted in America to prohibit slavery. All that changed was that the category ‘human’ in amendment 14 was expanded to include black Americans."

His contention is that if black people in America had the right to interpret the law under slavery, they would have interpreted it differently to the way white people interpreted it.

His argument, simply put, is that white people — and specifically, political scientists — were content to ignore genocides and massacres as long as they were doing it to black people, but as soon as it was white-on-white genocide, they were forced to confront the limitations of their interpretation of the law.

"If this is 1939, we know that massacres had been conducted in [Africa] prior to that. In 1921 there had been ... the Queenstown massacre [where white people annihilated black people]. In 1904, white people had annihilated all the Herero people in Namibia," Lushaba says.

What Lushaba is trying to show is that genocide, per se, didn’t seem to be considered a crime by Europeans until it was white-on-white genocide. He might be putting the argument a little clumsily, but he certainly is not saying that the Holocaust isn’t a crime.

He is saying that, to the political scientists of the time, genocide didn’t seem to be a crime — until it was.

Lushaba goes on to speak about how we privilege one massacre over another "because modern disciplinary knowledge privileges that one, because … the institutional approach became delegitimised simply because it was unable to preempt … Hitler killing the Jews. That it was not able to prevent white people from killing black people in Namibia and SA seems not to matter."

Lushaba makes it very clear, on numerous occasions that you might miss if you’re the type of journalist who thinks watching a 12-second clip qualifies as evidence, that his examples are "emphasising that political science of the early 20th century had a very narrow reach".

For him, political science "focused only on the law governing institutions, forgetting that laws depend on human agency. It learnt this because Hitler came to power, democratically, and decided to kill the Jews … And this is when political science is jolted back into its senses."

Now this is not to say that Lushaba’s lecture does not warrant analysis and criticism, which is, after all, pretty much the rationale of a university.

Whether one should quite so blithely toss out inflammatory sound bites to a potential audience of anti-Semitic, right-wing conspiracy theorists is debatable, and there will be some who will question the motive in attempting to draw equivalencies between genocides. As well as the effects, unintended or not.

To take a North American example, a 2020 survey by the Anti-Defamation League found that "63% of American adults under 40 did not know that 6-million Jews died in the Holocaust. Over half thought the death toll was less than 2-million. Forty-eight percent were unable to name a concentration camp or ghetto, and 56% could not identify the concentration camp Auschwitz. Roughly one in 10 believed that Jews caused the Holocaust. These alarming findings underscore how important it is to combat Holocaust denial and distortion."

Lushaba might make the point, I imagine, that an equivalent survey would show an even more alarming lack of knowledge about the Rwandan genocide.

As he says in his lecture: "Political science begins from the sensibilities of white people. Modern disciplinary knowledges are incapable of recognising injustices when injustices are suffered by black people."

Not all news coverage of the "Hitler stalks the halls of UCT" incident was as abysmal as that of news sites that pilloried Lushaba based on a snippet of decontextualised evidence.

News24’s Tammy Petersen actually took the trouble to watch the lecture, and wrote a piece titled "Out of Line or Out of Context? What UCT Lecturer Said Before ‘Hitler Committed No Crime’ Comment".

But almost every other commentator seemed content to operate from scant evidence and plentiful bias.

When I’d finished watching Lushaba’s lecture, the next video YouTube suggested was Did the Beatles Know Theory? That makes a certain strange sense. We’re certainly living in an era of pop journalism right now.

A ‘Corruption Olympics’ would give real meaning to a contest between strongmen and strongwomen. SA is a bit off the pace on this count, though the DA ...
Features
1 month ago

SA’s media houses are looking increasingly gaunt as readers shun dead-tree publications in favour of digital. But their demise would be bad news for ...
Features
2 months ago

Victims of crime may seek to make sense of random acts of violence by mythologising criminals. Journalists should know better
Features
5 months ago
Next Article