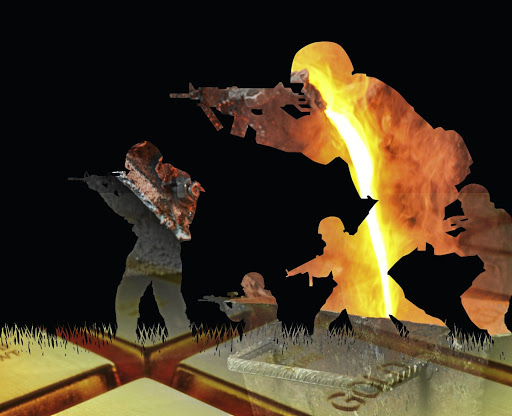 On March 10, 20 armed men stormed a gold plant 140km west of Joburg operated by Village Main Reef (VMR), a Chinese-owned mining company. After hijacking a front-end loader, the gang overturned an armoured vehicle and broke through the wall of a smelt house, then made off with an undisclosed amount of calcine, the gold-bearing material from which bars of bullion are processed, according to industry sources.

VMR has confirmed the incident, but declined to comment, as the matter is under investigation.

The attack is an audacious example of the spate of armed heists at gold smelters in SA since 2018 — attacks that typically involve 15 to 30 men armed with automatic assault rifles.

In the view of security analysts, the gangs’ methods — including cutting power to take out CCTV cameras, taking hostages and using explosives in some cases to blow through perimeter walls — suggest they have recruited former members of the police and armed forces, or ex-private security personnel.

Even unsuccessful attacks may be indicative of a highly tactical approach.

"Some of the attacks are done to test the security, to see how the mine security reacts and the timing of their response," says mine security consultant Louis Nel. "There is a reason behind their madness. They will launch an attack, they fail in their objective, then months later the successful one will happen."

A security executive at a Joburg mining house, who asked not to be named, says this appeared to be the case with two failed assaults at his company’s operations in 2019.

"The second time they clearly had a better understanding of our reaction times," he says.

The mining companies and the gangs are constantly adapting their methods to outflank one another. The March assault, for example, marked the first time that heavy machinery was used to smash through a wall. 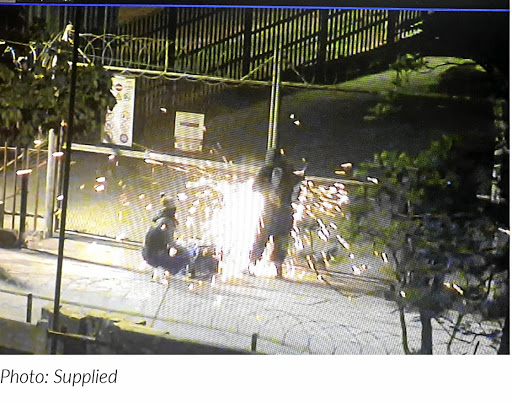 "Companies are also learning and are no longer parking loaders by the smelter walls," says the security manager.

According to the Minerals Council SA, there were 19 attacks on gold facilities in 2019, up from five in 2018 (attacks prior to that were sporadic).

However, this may be an underestimate, as not all companies report such incidents to the council, particularly smaller producers that are not council members, says Nel.

The council acknowledges the theft of more than 100kg of gold, but says not all companies disclose their losses. Companies are also unwilling to acknowledge publicly that attacks have taken place at their facilities.

In December, Gold Fields suffered an attack at its South Deep mine in Gauteng. Fifteen armed men stormed the operation and made off with gold worth about $500,000.

Gold Fields spokesperson Sven Lunsche says the company has subsequently put in place additional security measures at a cost of about R30m. Surveillance systems have also been upgraded.

"We are completely enclosing the mine with a perimeter wall and this should be in place by the end of the year," he says.

DRDGold, a midtier producer, was also hit late last year, and an employee was killed in that attack.

In an e-mailed response to questions, the company says: "One arrest was made and the individual was charged with murder and armed robbery. About half of the 12kg-15kg of calcine concentrate stolen was recovered at the home of the individual who was arrested." 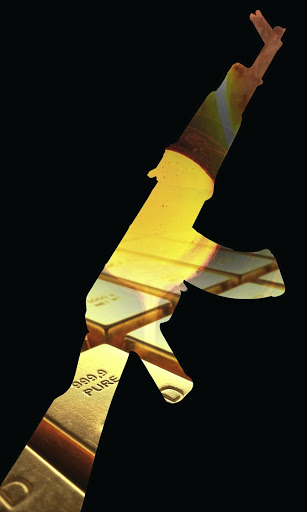 DRDGold has since spent about R10.6m on security enhancements, including surveillance and other technology.

This is one of only three such arrests that the Global Initiative Against Transnational Organised Crime (GI-TOC) has been able to confirm; Harmony Gold says two suspects were arrested in connection with a heist at its Kalgold mine in the North West in December.

The dearth of arrests poses a problem for law enforcement, as intelligence gathered from arrestees may help thwart future attacks.

But mining executives and security personnel believe the police forces in mining areas are compromised. Collusion, they say, includes tipping off illegal miners and the heist gangs to intelligence developments, turning a blind eye to their activities, "losing" dockets so cases are thrown out, and failing to act on information that could lead to arrests.

"Getting intelligence from arrested suspects is … crucial to preventing such attacks," says one mine security official. "Unfortunately, the cops often don’t know how to gather more intelligence or they don’t act on it."

Nel also confirms the shortfall in policing capacity: "The police are part and parcel of the problem. There was a gold and diamond unit in the police, but it no longer exists and so the police have lost that investigative capability."

But the mining companies are applying pressure to change the situation.

"There are lots of allegations of corruption in the police in those areas and so the industry is talking with the SA Police Service to reinstate the specialised mine police unit," says an executive in the industry.

Some in the industry also associate the surge with a decline in cash-in-transit heists — a result, they say, of initiatives such as security co-operation between affected businesses, and new technologies that coat the vault of the vehicle with a fast-drying foam during an attack. 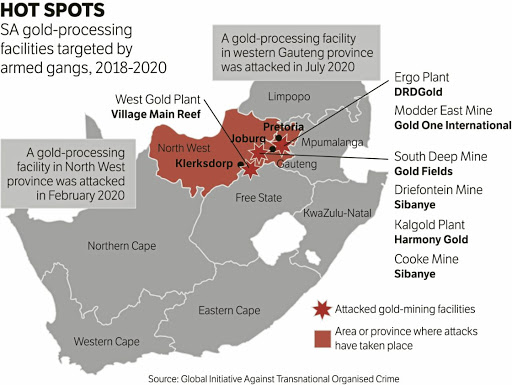 Security experts believe some cash-in-transit gangs subsequently turned their attention to gold. For a start, the same weapons are used (including the use of explosives to blow vaults open). And, geographically, the cash-in-transit heists have been concentrated in Gauteng,

near where the bulk of the gold attacks have taken place.

"It’s big groups [involved in cash-in-transit heists], just like the gold attacks, with sophisticated weapons," says the Joburg mine security official. "We strongly suspect there is overlap between the gangs."

He also says such gangs are suspected to have been involved in bank robberies, but the huge increase in security at banks — from CCTV cameras and increased security staff to marked notes and other initiatives — have, over the past 10 years, gradually cut off that once lucrative revenue stream.

"[The gangs] operate on a risk model like any other enterprise. High reward, low risk. [When the] risk gets too high and the reward too low, then it’s time to change their business model," he explains.

The rise in gold attacks has also followed the 2017 drive by gold producers to remove illegal miners from their operations.

This initially yielded some success. But it may have had the inadvertent effect of forcing the illegal mining networks to find new sources of revenue.

The foot soldiers used in these two spheres of criminal activity are different: illegal miners, or zama zamas, are often migrant workers from neighbouring countries such as Lesotho and Mozambique who have often previously worked in the mines, whereas members of heist gangs are thought to have security backgrounds. Illegal miners require equipment and supplies so they can spend months underground, while the heist gangs require arms and vehicles.

But the gold buyers are the same, and mine security executives suspect that the groups funding these operations have links with one another.

"The criminal gangs are diversifying. Twenty years ago a gang would target gold or diamonds, but now they are involved in different commodities and different areas," says another mining security official, adding that there are now links between several illicit commodity trades, including gold, chrome, copper and rhino horn.

Other security and industry sources agree that this is the case.

"A gang might say: ‘We can do cash in transit, but we can’t smelt gold. So let’s combine forces,’" says one. 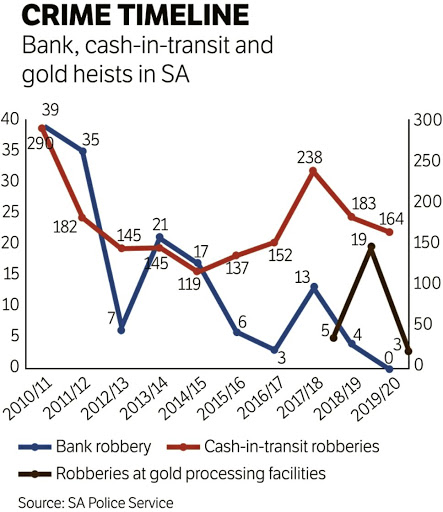 Regardless of its origin — be it prised from the ground by an illegal miner or stolen at gunpoint — gold flows through the same laundering channels, with Dubai, India and China the main destinations.

The gold heist gangs "take the concentrate, process it to gold and then sell it through the normal channels — the same ones the zamas use," says Nel.

These "channels" include second-hand jewellery shops and gold dealers in SA, where the metal becomes "legitimate" for purposes of resale.

According to a former police investigator, some vendors even use illicit gold to fraudulently claim VAT refunds.

"The buyers purchase the illicit gold, it is unwrought and they need to get it in the system. They buy it, throw it into a big pot and melt it, and then they take it to a refinery and present it as second-hand gold," he explains. "They then claim VAT and they often make more money on that than on the gold."

Alternatively, gold is simply smuggled out through SA’s airports and shipping ports.

"We are convinced that, through our airports and shipping ports, these unrefined gold bars make their way to Dubai, China and India," says a mine security official.

"Two years ago India strengthened its controls on gold coming into the country, and we are not sure how the criminals have got around that. But as far as China and Dubai are concerned, we are given to understand gold still flows quite freely into those jurisdictions, where it is then laundered into the legitimate market."

Since SA imposed its lockdown in late March, the frequency of attacks on gold facilities has declined, security sources say.

Interestingly, however, cash-in-transit heists have spiked again, according to data shared by the SA Banking Risk Information Centre. Though cash-in-transit heists were down between March and June, when compared with 2019 figures, in July they were up 69% on the same month last year. This rose to a 122% increase from October 1 to 23.

There are now links between several illicit commodity trades, including gold, chrome, copper and rhino horn

The increase has been particularly marked in Gauteng, where 102 incidents were reported to October 23, compared with 53 in 2019 — a 92% increase.

"You see a focus on one source of contraband, then a switch to another when obstacles are thrown up," a security source says.

When cash-in-transit heists became more challenging, the focus turned to gold facilities. But then gold mining companies ramped up their security, funded in part by the high price of gold.

GI-TOC has been able to confirm only three attacks on gold facilities in 2020: the VMR incident in March, and one each in February and July. (In both these cases, the company involved requested that it not be named.)

A security source with the company involved in the July incident describes a sophisticated attack: "They took out the power so the CCTV went down. [They] took a plant operator hostage [but] there was no gold in any form in the smelt house. Luckily there was no gold in the facility at the time."

But with gold’s price soaring — it hit a record of more than $2,000/oz in early August before retreating to around $1,800 now — there are concerns that attacks on gold facilities could spike again. Once the gangs figure out how to bypass the new security measures, that is.

*GI-TOC is a network of experts from law enforcement, academia, conservation, technology, media, the private sector and development agencies. It publishes research and analysis on emerging criminal threats, and works to develop strategies to counter organised crime

We’ve started to valorise thieves and envy the successfully evil. But impunity is blurring the line between right and wrong, and tearing at the ...
Features
1 year ago
Next Article