Free State structures are mobilising support for Magashule when he appears in court, in defiance of a directive from national leaders 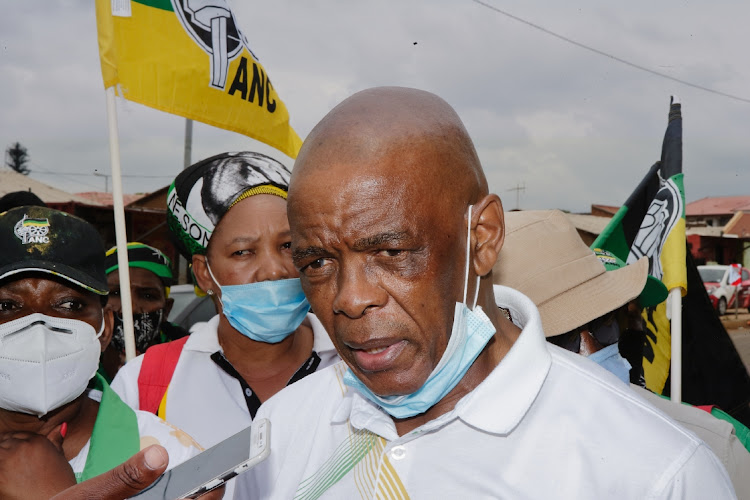 ANC secretary-general Ace Magashule embarks on a door to door campaign ahead of the by-elections in Soweto. Picture: Gallo Images/Fani Mahuntsi

The ANC may not want a spectacle outside court when one of its most senior officials, secretary-general Ace Magashule, appears in court on Friday, but that is exactly what the party will get.

ANC structures in the Free State are mobilising party members to come out in their numbers to support Magashule when he appears in court, in defiance of a national executive committee (NEC) decision and a directive from the top six officials, including Magashule, on Tuesday.

ANC rules say that leaders in court can be supported by individuals, but not structures of the party. The Mangaung regional task team is defying this by formally organising branches and structures to protest outside the Bloemfontein magistrate’s court.

Magashule is the highest-ranking leader of the ANC facing charges. The tone of a briefing by the ANC’s national officials on Tuesday after a meeting with him showed that the party is seeking to carefully manage perceptions around the arrest in a bid to salvage its image.

Corruption and state capture contributed to the ANC’s decline in electoral support over the past decade and President Cyril Ramaphosa was elected to the party’s top spot in 2017 on an anticorruption ticket.

The FM understands that the provincial leaders and the Mangaung regional task team have issued communication to party structures to come out in Magashule’s support.

On Tuesday, ANC deputy secretary-general Jessie Duarte, delivering a statement from the party’s top six leaders, said Magashule himself had said he did not want “any individual or groups to march … in his name”.  “The national officials expressed the wish that all structures respect this in the spirit of one ANC and to respect the rule of law,” Duarte said.

ANC members protesting in support of their leaders outside court has been seen  as counterproductive to the party’s efforts to polish its image as it creates the perception that the party supports corruption when its members and structures rally against law enforcement agencies and in support of their own.

The FM understands that Magashule told the top six he wanted time to deal with the allegations against him. He also is understood to have assured them that he was innocent of the charges he is set to face. Magashule has been accused of contravening section 4 of the Prevention & Combating of Corrupt Activities Act.

The ANC NEC has a standing resolution that members may express their support for leaders facing charges in court in their “individual capacity”, but not as structures or representatives of the party – a decision taken amid former president Jacob Zuma’s court appearances.

But the Free State – the province where Magashule was ANC chair from 1992 and where he led government as the premier for the past decade – has decided to back Magashule, with messages circulating among ordinary members for them to come out in their numbers.

A communication from the Mangaung regional task team to “all branch secretaries” reads: “The ANC [regional task team] in Mangaung is cordially inviting all its branches and alliance structures to join picketing in support of the SG of the ANC on the 13th of November. Each branch is expected to submit a list of volunteers to be allocated transport.”

Magashule has sought to paint himself as a victim of a political conspiracy, telling party faithful while on the campaign trail ahead of Wednesday’s by-elections that the “enemy was within”.

However, corruption and fraud linked to a R255m asbestos audit contract which he will appear for is but one among a number of scandals clouding Magashule’s image. The manner in which he presided over the Free State is detailed in journalist Pieter-Louis Myburgh’s explosive book, Gangster State.

Magashule’s support is likely to be limited to Free State ANC members and a handful of national leaders including Ekurhuleni mayor Mzwandile Masina and leaders of the Umkhonto weSizwe Military Veterans’ Association.

Magashule does not hold as much sway as he would like. The problem is, neither does Ramaphosa
Opinion
7 months ago

As Zondo issues a summons for Zuma to appear at state capture commission, it’s clear Magashule is aware of how deeply he has been implicated by ...
Features
8 months ago

The ANC’s 2005 NGC was a turning point in Zuma’s favour ahead of his ascent to the presidency, but Magashule will need a miracle if he thinks the ...
Opinion
8 months ago
Next Article