SA’s hospitality industry, which has lost about R100bn in tourism spend since the lockdown was imposed in March, is waiting anxiously to see if the department of home affairs will heed calls to scrap its “red list” of 22 countries whose citizens are banned from travelling to SA.

The list, which includes eight of SA’s top 10 international tourism markets — including the UK, US and Germany — is expected to be updated some time this month.

The general view is that anyone who provides proof of a negative Covid-19 test taken within 72 hours from the time of departure and is cleared by screening protocols should be allowed entry to help lift SA’s tourist economy.

Hotels, especially those in Cape Town and surrounds that are heavily dependent on international trade, have been particularly hard hit by the pandemic-induced slump in tourist arrivals.

Lockdown-related travel restrictions couldn’t have come at a worse time for Cape Town, as it s hotel industry was only just on the rebound following the 2017/2018 drought.

At least six new hotels (about 1,500 rooms) opened their doors last year, adding to the number of empty rooms across the Mother City.

New hotels include the three-star Signature Lux Foreshore and Capetonian Hotel, as well as two five-star boutique hotels — Gorgeous George and Labotessa. All four are in the city centre.

A further four developments are either under construction or being planned for the CBD.

The latest hotel trading figures, as tracked by global hospitality analytics specialist STR, show that Cape Town had a bumper January and February (see the graph). In January alone, occupancies rose 5.2% to 69.5%, while revenue per available room climbed 13.5% to R1,488.90. 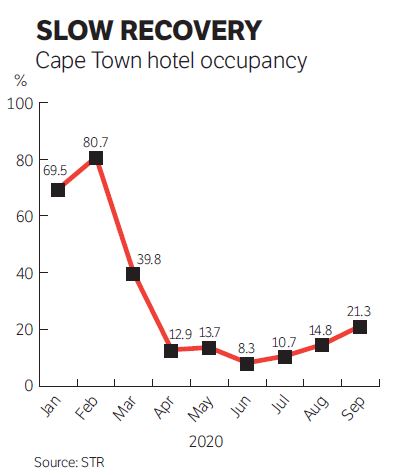 But by June, Cape Town’s occupancy had slumped to a record low of 8.3%, and revenue was just R63.27 per room. Though trading figures improved slightly from July as travel restrictions were eased, occupancies were still only at 21.3% and revenue per room was R199.32 in September.

The question is: how long will it take Cape Town’s hotel industry to return to pre-Covid levels? And in the meantime, how will hotels stay afloat?

Satsa chair Tony Romer-Lee estimates that only half of Cape Town’s 80-odd graded hotels are open, some only partially. He says most are likely to remain shuttered until business travellers start to return.

But the bad news is that international arrivals (both leisure and business) are not expected to show a marked recovery before September/October 2021.

Romer-Lee, who is also managing partner of Valor Hospitality in Africa and the Middle East, says only “swallows” from the UK and Europe (seasonal travellers) have started to trickle back.

Also, forward hotel bookings from international tourists for the first quarter of 2021 have either been cancelled or postponed due to the second coronavirus wave in Europe.

“The only airlines that are hanging in there are the Middle Eastern ones like Emirates and Qatar, and German carrier Lufthansa,” he says.

Romer-Lee says Cape Town’s hotel industry will no doubt see some closures. However, he believes most will survive, even if they are mothballed for an extended period.

He expects those with decent balance sheets to use the downturn as a chance to reposition their portfolios for what could be a strong post-Covid recovery.

The industry is hoping the R7bn upgrade under way at the Cape Town International Airport will go some way to speed up a post-pandemic rebound of international visitors. The project includes the construction of a new runway that will allow the airport to accommodate larger aircraft and increase its per-hour landings and departures.

The cruise terminal at the V&A Waterfront is also expected to continue its growth trajectory from late 2021. Passenger numbers at the port rose from just 6,050 in 2012 to 52,580 during the 2018/2019 cruise season, according to Cape Town Tourism.

Meanwhile, Cape Town’s hotel industry will have to rely on domestic leisure travellers to stay afloat.

Wayne Troughton, CEO of Cape Town-based HTI Consulting, says local hospitality companies will have to become more creative if they want to capture a larger slice of the domestic market.

For instance, “staycations” should be considered, where operators promote “mini-breaks” to Western Cape residents.

Writing in the “State of Cape Town Central City Report 2019”, Troughton says a “pay now, book later” system is another way to boost cash flows — selling credits for rooms (at discounted prices) that can be redeemed at a later stage.

Soon you may be able to work and live in Sandton

Western Cape turns on the cheek to lure domestic tourists

City Lodge: A casualty of Covid

City Lodge: A casualty of Covid