#JobsSaveLives: Restaurant industry, on a precipice, protests against crippling regulations 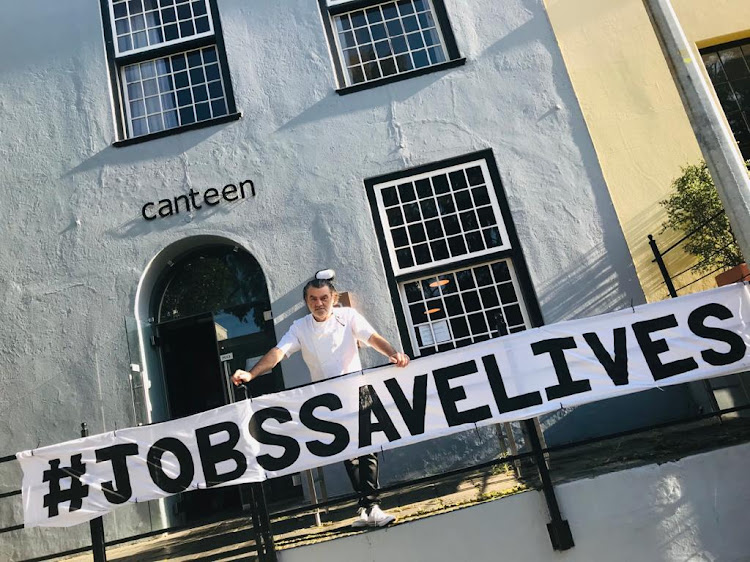 The restaurant industry, bleeding jobs on a daily basis due to government’s often baffling regulations, has finally had enough.

Yesterday, chefs, restaurateurs and waiters, together with the Restaurant Association of South Africa (Rasa), staged a peaceful protest, setting up empty tables with empty seats on the streets outside their restaurants between 12pm and 2pm.

Dubbed “A Million Seats on the Streets”, it’s the largest ever demonstration by the industry in SA.

It’s clear the government wasn’t happy about it. On Tuesday the SA Police Service sent a letter to Rasa, saying the protest would be considered a “prohibited gathering” under the Disaster Management Act.

It’s a measure of the depth of sentiment about this issue that the industry went ahead despite this. Some protested on the sidewalks, others on the side of the street, while those with permission went ahead and blocked the roads, mindful to still obey the law.

Rasa CEO Wendy Alberts tells the FM: “The protest was a wonderful success and raised awareness of the plight of the restaurant industry.”

While the association met with tourism minister Mmamoloko Kubayi-Ngubane, Alberts is disappointed that President Cyril Ramaphosa didn’t give them any time.

Nonetheless, Rasa was able to hand a memorandum to the government detailing requests, including the removal of the alcohol ban and the lifting of the curfew.

Alberts says she’s pleased the restaurants at least had an opportunity to make their voice heard.

But it won’t be the last such protest. On Friday, in another peaceful protest, dubbed “Serve Us, Please”, human chains will be formed to illustrate the many people who stand alongside the hospitality, tourism, entertainment and liquor industries.

The protests will take place at the buildings of parliament in Cape Town and at the Franschhoek town hall, the Kings Beach parking lot in Port Elizabeth, the Durban city hall and the corner of Rivonia and Maude Streets in Sandton, as well as opposite the Union Buildings in Pretoria.

The industry hopes this protest will finally awaken the politicians to the carnage in the sector where, according to some estimates, 70% of the jobs have already been lost, leaving 800,000 people without an income.

It shows that while many industries have been affected by Covid-19 and the subsequent lockdown, few have been battered as hard as the restaurant industry.

The death knell was Ramaphosa’s announcement two weeks ago reinstating the alcohol ban and implementing a 9pm curfew under the latest iteration of what is apparently lockdown level three.

It meant that the devastating announcements of restaurant closures that were being made in the first weeks of the lockdown became a daily occurrence. Usually, it’s a variant of: “We’ve really tried, but we can’t carry on any more and we’re closing shop.”

It’s no surprise. Restaurants were first put on indefinite hold, then given the green light to open for a few weeks. But not being able to sell alcohol meant they could rely only on the dinner service to justify being open. The 9pm curfew essentially kills that, unless you’re looking for a pensioners’ 5:30pm seating but without the glass of dry white.

This week’s two protests – the one that has been held and the one planned for Friday – have been preceded by a campaign in which the #JobsSaveLives hashtag, aimed at showing the true impact of the regulations on the industry, gained traction on social media.

The movement is spearheaded by acclaimed chef Liam Tomlin, and features pictures of chefs and restaurateurs with signs showing the number of people who risk losing their jobs.

A few have expanded on these notices, pointing out how many mouths those employees feed. Others have taken to protesting how the government and insurance companies have failed them — be it from the Covid-19 Temporary Employer-Employee Relief Scheme payments that haven’t arrived or the claims that have been rejected.

This week’s protests will, at least, make it harder for the policymakers to ignore the human cost of their decisions to the service industry.

In SA, erratic or nonexistent government support is almost to be expected. But for the private sector, in the form of SA’s short-term insurers, to ...
Opinion
9 months ago
Next Article

SARAH BUITENDACH: Eating out and dirty weekends: how Covid killed the fun

SA business industry on its knees

SARAH BUITENDACH: Eating out and dirty weekends: how Covid killed the fun

SA business industry on its knees