Mogoeng Mogoeng’s comment on Palestine, like Helen Zille’s on racist legislation, was an unnecessary attempt to inject his skewed belief system into the national dialogue 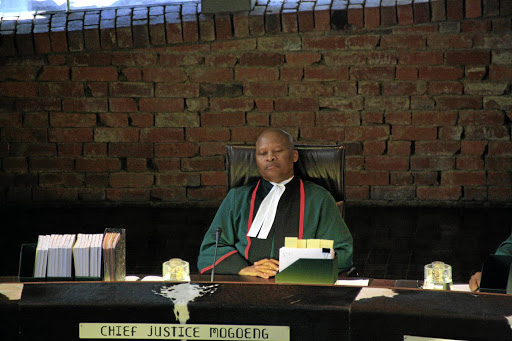 Last week, I learnt a pithy Afrikaans saying: "Jy krap waar dit nie jeuk nie." A direct translation would be something like: "You’re scratching where it doesn’t itch." As far as I understand it, the idiom refers to the act of aggravating an itch that doesn’t exist — of worrying at a wound that isn’t really there.

As you might have guessed, the person using it was talking about She Who Must Not Be Named, the DA’s Voldezille, who had decided to tell everyone that while she is out at the coal face saving the world from the racism of our government, her colleagues, like Phumzile van Damme, "chill at home and enjoy the sea view".

Quite what Helen Zille has against sea views is a mystery, though one detects a whiff of that traditional cultural prejudice of the landlocked suburbanite for those who choose to live on the seaboard.

But don’t groan, dear reader. This is not another column about the insanities and inanities of the DA’s federal council chair, though, like most columnists, I find it really hard to ignore low-hanging fruitcake. It is instead about the propensity of people to mysteriously decide they absolutely have to say something stupid, despite the fact that it’s going to cause a lot of controversy that nobody really needed.

The recent prime example of that is God’s Judge, chief justice Mogoeng Mogoeng, who has decided — possibly with justification — that two books cobbled together over the centuries by a selection of politically driven chancers, deranged mystics and church clerks is a better arbiter of human rights issues than the constitutionally driven government of SA.

And who among us can say he is wrong? I mean, besides the 5% or so of South Africans who don’t identify as religious, and the no doubt many perturbed Christians with a slightly more realistic view of the elasticity of exegesis in their source material.

According to the chief justice, the Bible’s take on human rights supersedes that of the SA constitution.

Now, there are many ways to draw very positive messages about human rights from the Bible, but there are also very many ways to justify crimes against humanity, such as genocide, homophobia, apartheid or Donald Trump. It’s not exactly a coherently constructed document, and only the convenient fiction of faith can allow anyone to claim any sort of ideological exactitude.

Allow ANC national spokesperson Pule Mabe to remind you of our government’s standpoint. "We support human rights and we stand with the oppressed Palestinians who include Christians of the Holy Land, as well as the residents of Jerusalem and Bethlehem who are living under Israeli apartheid."

The chief justice’s argument against the SA government’s official standpoint is drawn from Genesis and the Psalms.

To quote his online interview with the Jerusalem Post, whose editor clearly couldn’t believe his luck: "Let me acknowledge without any equivocation that the policy decision taken by my country is binding on me.

"So anything I say must not be misconstrued as me saying that my country’s laws are not binding on me. But … as a citizen I can suggest that changes are necessary …

"Let me give the base. The first base I need is in Psalm 122:6 which says: ‘Pray for the peace of Jerusalem. They shall prosper that love thee.’

"Also Genesis 12:1-3, that says to me as a Christian, that if I curse Abraham and Israel, God, the Almighty God, will curse me too. So I am under an obligation as a Christian."

It’s a rewards-driven way of thinking shared by Mogoeng’s supporters, including Klaas Mokgomole and Mmamalema Molepo of the group Africans for Peace, who tell us: "By merely expressing his religious views that do not infringe on the rights of others nor advocate incitement to cause harm, chief justice Mogoeng Mogoeng has had many an insult hurled at him. The chief justice is not money and cannot seek to please everyone."

Does money please everyone? That seems a strange point of view, and possibly a bit more revealing about the nature of belief as currency than intended.

The chief justice doesn’t appear to be a huge fan of the ANC’s attempts to rectify the injustices of apartheid. "Come to SA," he invited the grateful editor in chief of the Jerusalem Post, "and see how the overwhelming majority of people live in shacks, how the overwhelming majority of people of a particular race are unemployed, are living in abject poverty.

I mean, I thought it was called the reconstruction & development programme, but I admit I haven’t been keeping up with government promises of late. Who can stand the constant disappointment?

Zille believes we have more racist laws now than we did under apartheid. While this might be blindingly stupid, it at least still acknowledges that the law is the law. Our antinomian chief justice appears to be pulling a Gallio (proconsul of Achaea in 51 CE, I’m sure I don’t need to remind you — Acts 18:12-16), and seems to be a proponent of the attitude to the law embodied in Galatians 3:23-25. "Before the coming of this faith, we were held in custody under the law, locked up until the faith that was to come would be revealed. So the law was our guardian until Christ came that we might be justified by faith. Now that this faith has come, we are no longer under a guardian."

Which is sort of talking himself out of a job, if you think about it.

Why should we worry about a chief justice’s personal belief system, you ask? One answer comes from the ANC’s Mabe. "The chief justice … is the primary protector of the constitution of SA and if the government was in violation of the Bill of Rights, he and the bench must defend the constitution above all else and any other consideration. For this reason, his disagreement with the policy of the government is of grave concern, where the main argument of the policy on Palestine is premised on human rights."

"So everybody is trembling, even the people of faith, where boldness is supposed to be found, suddenly the faith that they used to have in the Almighty God is not there any more."

The idea that science-based extrapolation is described as "prophecy" is scary enough, with its suggestion that prophecy and science are similar. Even more disturbing, though, is the assumption that the media is fear-mongering with all this Covid-19 nonsense, and that people of faith shouldn’t be trembling — for some God-given reason of immunity, one assumes.

Mogoeng’s argument isn’t quite as crude as these extracts paint, of course. But as with Zille’s contention that there are more racist laws now than there were under apartheid, his very intervention is so unnecessary, and appears to be premised on the same impulse as Zille’s. That is, an attempt to inject one’s own skewed belief system into the national dialogue by virtue of a provocative and ultimately indefensible proposition that doesn’t really do your primary argument any benefit.

All that does is get everyone itchy for a while, to no ultimate good.

EDITORIAL: Mogoeng Mogoeng’s comments can wait until he retires

NEWS ANALYSIS: Mogoeng Mogoeng owes it to the judiciary to avoid political ...

NEWS ANALYSIS: Mogoeng Mogoeng owes it to the judiciary to avoid political ...