If SA has to rely on anti-lockdown ‘Enders’ to make rational and responsible decisions about life once restrictions have been lifted, we may well be doomed 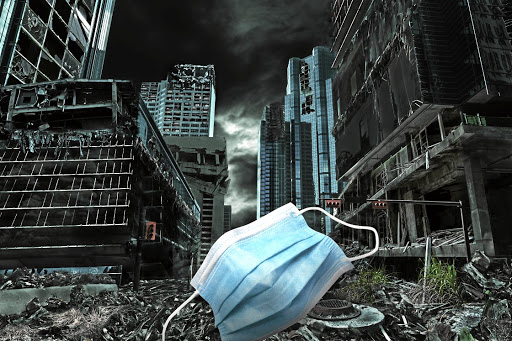 One of the more persuasive arguments offered against the continuation of the national lockdown is that the government has done all it can to give citizens the information, tools and grace period needed to deal with the coronavirus. It’s time to lift the lockdown, the argument goes, and trust South Africans to take responsibility.

Some of our louder libertarians have echoed this, or in some cases thought of it all on their laborious lonesome. Their formulations don’t inspire confidence, as it’s generally couched as an every-man-for-himself scenario, with the rare everywoman thrown in now and then. So there are a lot of manly men thumping their pigeon chests, stamping their feet, railing at maskpussies and proudly announcing that they are heroic grown-ups willing to take their chances with the virus.

Just a note on the term "maskpussy": this apparently refers to cowards who refuse to risk other people’s lives, and insist on wearing face masks. It’s a great example of the flawed and egocentric logic of that faction of the anti-lockdown brigade who think they should be allowed to do whatever they want. In their minds, the brave don’t wear masks, only the cowardly.

As many have noted in those States of America previously known as United, those brave anti-mask protesters apparently need to carry firearms to feel safe while shopping, not to mention body armour in some cases. Yet they sneer at people who don a bit of cloth so as not to infect others.

It’s a truly insane way of thinking about the world, as it entirely elides the fact that your actions also have consequences for others.

Some have chosen to believe that wearing a mask is not a way to stop the spread of the virus, but a coded sign that you support a dictatorship.

Facebook user Ruth Maktub, for example, believes that "wearing a mask shows them you vote to support their corruption. By wearing a mask it means I believe their bullshit story and that they can have my sovereignty and freedom of speech."

And then there are the genius-level lockdown logicians. On Facebook, user Madeleine Ferreira du Preez proposes this tantalising paradox: "If masks WORK, why do businesses need to BE CLOSED? If they DON’T work, WHY are we FORCED to wear them? I’ll give ya a minute …"

Oh, Madeleine. It would take a lot longer than a minute to explain the ridiculousness of your false syllogism.

In an interview with the Daily Maverick, in which he advocated lifting the lockdown, infectious disease specialist and member of the ministerial advisory committee on health prof Shabir Madhi said the following: "The only thing that is going to help us is for the citizens to take responsibility. [The] government can come with every policy in the world. If citizens are not going to take responsibility, we are going to fail."

Which is a lot of fancy words for a simple message: we’re doomed.

No, just kidding. We’re not. But if you dip into the stream of angry semi-consciousness that is an anti-lockdown group on Facebook, it’s hard not to be simultaneously assailed by the twin convictions that yes, we are doomed, and that we probably deserve it.

Again and again in his interview, Madhi emphasised that we need South Africans to behave sensibly. "A surge of cases is coming … the only thing that will help is for the citizens of SA to take responsibility.

"If people don’t abide with [government] recommendations, we will fail. It does not matter what level of lockdown we are finding ourselves in."

If you’re wondering who all these users are that I’m quoting: in the spirit of research, I joined one of the anti-lockdown groups. The people there refer to themselves as "Enders", as in "Good evening, fellow Enders".

If you’re worried about why I’m using their names and not aliases, it’s because nothing they’ve said is anything they’d be ashamed of. They are absolutely happy to proclaim their beliefs and opinions on a public platform, and far be it from me to be the lamestream media practitioner who won’t tell their stories.

And here are some examples of their brave fightback against our authoritarian, despotic government.

User Remington Steele II (possibly not his real name) says: "Their ‘experts’ are all frauds bought and paid for. They are eugenicists who want to reduce global populations through mandatory vaccination. Watch Plandemic."

User Juanie Huyser — who also thinks Plandemic, the universally discredited disinformation video, is "Mindblowing!!" and "A must watch if you want to know the truth!!" — has the following manifesto: "I refuse to participate in ‘quarantine life’ until there’s an unsafe, untested vaccine released in 18 months (by which time the virus has mutated and the vaccine outdated). I refuse to receive said vaccine to make others feel more safe. That’s my sovereign right to choose!!!"

Ender Luvuyo Williams has gone the religious route, and the coronavirus is apparently a weapon in the fight against Christianity. "All this is because of corona, an aura of plasma that surrounds the sun, sun’s corona. Corona is also the name of the cross from Roman Catholics. Pope and [US President Donald] Trump they know exactly what this is heading to. Really the book of Revelations 13: all the world wondered at the beast, verse 17 tells what is about to happen, recently were unable to buy or sell. We have businesses that [open] until Sunday but to them after this we won’t be able to open even the garage for petrol because we will be forced to worship their sun god."

The idea that this is all an anti-Christian ploy by Satan’s misinformation army is fairly common. Ender Donald Barnett explains: "The government believes they hold the keys to our sovereign rights, while they have sold their souls to dark forces.

"How is it possible that thousands need to stand in line for food parcels, with no ‘social distancing’ yet people of faith are not allowed to come together to pray?"

And there is something undeniably powerful about the picture Ender Peter Mansfield paints of North Korean leader Kim Jong-un as a collective hallucination. "I don’t think even North Korea stops people buying warm chicken. It certainly does not ban smoking and drinking (see their leader)."

These messages are just the tip of the crazy iceberg. And herein lies the danger. When we lift the lockdown, we’re going to have to rely on people with the intellectual heft of a Fikile Mbalula emoticon and the emotional empathy of a spittoon to make decisions that affect us all.

And yet, while it’s easy to make fun of the obvious nincompoops floundering in the shallow end of the End the Lockdown social media stream, there are a lot of people who are desperate without being deranged.

Just one example, from Cheryl-Lee Cupido: "I never thought I will be going through this. Watching how your powerless mother loses everything she has worked for her entire life. Feeling helpless as there is nothing you can do anymore to help as my funds also ran dry. Trying every avenue for some sort of relief. No institution is willing to help. For how much longer do we have to endure this? [It’s] not only physically, mentally we are going under. So where do we go from here?"

And that’s the crucial question, in a way. Not only where do we go, but how? How do we enlist the support of all South Africans to fight the virus, and how do we stop the selfish and obsessed Ender-timers from dragging us along into their narcissistic rapture?

Covid-19 pandemic brings trolls out of their holes

The Covid-19 pandemic is allowing a time for introspection, and for appreciating how interdependent our world is. Sadly, it’s also bringing the ...
Features
1 year ago
Next Article

The faultlines of our society

The devil and the deep blue sea

‘Schadencovid’: will antivaxxers shun a cure?

The faultlines of our society

The devil and the deep blue sea

‘Schadencovid’: will antivaxxers shun a cure?