If there’s one common thread that’s emerged from the commission of inquiry into state capture this year, it’s that the Gupta family wielded extraordinary influence over Zuma and, by extension, the ruling party 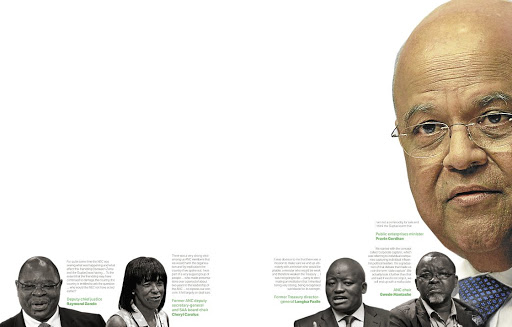 The Zondo commission of inquiry into state capture began with the ANC insisting that it is not on trial — but four months later, it’s clear that the party cannot distance itself from former president Jacob Zuma and the actions he took in service of the Gupta family.

With the commission in recess until the new year, it is an opportune moment to take stock of what has emerged in the hearings.

If there is a common thread to the testimony of current and former cabinet ministers, government officials and at least one senior party leader, it is that the Gupta family wielded extraordinary influence over Zuma and, by extension, the party governing SA.

This image really started to take shape in November, when, for the first time, a former cabinet minister and ANC national executive committee (NEC) member gave the commission and SA a glimpse into the goings-on inside the party.

Former mineral resources minister Ngoako Ramatlhodi told the commission that the NEC had raised the issue of the Guptas with Zuma, but that the former president would not budge on the matter. Instead, Zuma would say: "Those people are my friends because they helped my children when I was persona non grata: they helped Duduzane, they helped Edward, they gave them jobs when no-one wanted to."

What’s clear is that the NEC — the most powerful body in the ANC — exercised no control over Zuma. The majority of the 80-member committee was firmly entrenched in the faction he controlled, which meant he had the final say in meetings and would impose his views on the party, even if there was debate on a matter.

For example, after the ANC lost control of three metros in the 2016 municipal elections, the NEC announced that it would take collective responsibility for the loss — despite the finding that it was the controversies surrounding Zuma that had contributed to the party’s poor performance at the polls.

"[Zuma] had too much power … and the power arises out of the support system that was with the organisation in the NEC," Ramatlhodi said.

The Guptas’ grip on Zuma was "like [a] python which had wrapped itself around him".

Ramatlhodi said he’d heard that the Guptas even had their own secretary for the president. So the affairs of the leader of the country were managed by two secretaries — one who "belonged" to the Guptas and another in the Union Buildings.

You can speak until you are red in the face and they just look at you. At some point you get tired of talking

Former National Treasury director-general Lungisa Fuzile also placed Zuma, and the ANC, at the centre of state capture. Fuzile said that on the night Nhlanhla Nene was axed as finance minister, he (Fuzile) received a call from the head of the ANC economic transformation subcommittee, Enoch Godongwana, who told him: "You are now going to get a Gupta minister who will arrive with his advisers."

Sure enough, when ANC backbencher David Des van Rooyen arrived to replace Nene — a short-lived appointment — he brought with him Mohamed Bobat and Ian Whitley, both apparently hand-picked by the family.

The new finance minister’s proximity to the Guptas was confirmed by Ramatlhodi, who testified that Van Rooyen and Mosebenzi Zwane (mineral resources minister after Ramatlhodi) made no secret of their connections to the family. Van Rooyen was even boastful about it, Ramatlhodi said. Before their appointments, Van Rooyen and Zwane were "camping there in Saxonwold", where the Guptas lived.

Ramatlhodi’s testimony provides some insight into why the ANC did nothing, and why it is now trying so hard to explain itself on the eve of crucial elections. But it’s been a case of too little, too late.

ANC chair Gwede Mantashe may have been one of the first ANC leaders to voice his unease about the growing influence of the Gupta family publicly, especially after the family landed wedding guests at the Waterkloof air force base in 2013. But for a former secretary-general of the party under Zuma, he provided relatively limited testimony to the commission.

Following the meetings, he said, the team reported back to the party’s national working committee (NWC).

From there, things took a bizarre turn.

According to Mantashe, the NWC’s "observations" about these meetings included the suggestion of "co-ordinated action by the banks [that] smacks of collusion", and that the banks’ power to close accounts without explanation constituted a "threat". The NWC report on this was subsequently adopted by the NEC.

Mantashe was unable to explain how these observations came about and why they were adopted by the party. He simply said: "The perception that the bankers were colluding, and the perception that banks were exercising power of white monopoly capital against black business — and that is the observation of the NEC — that is the basis of engagement between the ANC and the banks."

It’s hard not to see the power of Zuma and his backers in these strange conclusions, particularly given that Mantashe said the ANC delegation left the meetings understanding "the basis" of the banks’ actions, and was "happy" with the explanations given.

But in the same breath, he told the commission that the ANC was dealing with the "challenges" of state capture at that very time.

"We went further and actually dealt with the allegations that the Gupta family influenced decisions of the state and of the ANC," he said.

At the time, Mantashe called on party members to come forward with evidence of state capture. Eight did so, he said, but all bar one thought it inappropriate for the ANC to deal with the issue — hence the party’s call for an independent commission.

While it’s clear now that the party was aware of the Guptas’ influence long before the bank meetings, Mantashe kicked that particular can down the road, telling the commission that President Cyril Ramaphosa would testify and respond to the issues relating to the party.

Ramaphosa would, he said, "explain what action the ANC took and why it omitted to intervene in circumstances when it should and could have done so".

It is not clear when Ramaphosa will testify, or whether this will be before the 2019 elections. But the Sunday Times reported that the president will be advised to apologise for the ANC’s failure to act sooner.

This is probably the right time for the ANC to shoulder some collective responsibility, because it’s clear that the party and its leaders were aware of the Gupta goings-on.

And there’s still a mountain of state capture allegations to come, such as those relating to state-owned enterprises, Zuma’s interference in key appointments at these institutions and the nitty-gritty of the looting carried out at them.

It is to these issues that the commission will turn in the new year. It will also allow witnesses such as former deputy finance minister Mcebisi Jonas and former ANC MP Vytjie Mentor to be cross-examined.

As for Zuma, it’s unclear whether we will ever hear his side of the story.

In the early days of the commission, Zuma’s lawyers said he would not give evidence or apply to cross-examine any witnesses because he did not believe he had been personally implicated.

However, presiding judge Raymond Zondo has urged Zuma to reconsider.

The deputy chief justice has the power to subpoena witnesses, but he seems loath to do so and has instead implored those with information to come forward of their own accord.

Given Zuma’s intransigence — and his insistence that he has no case to answer — Zondo may be forced to subpoena the man who seems to have propelled himself, his party and his country into the state capture pit.

The Zondo commission of inquiry was set up to investigate allegations into state capture, corruption and fraud in the public sector and kicked off in August 2018 in Johannesburg. Here Tiso Blackstar executive editor Ranjeni Munusamy reveals everything you need to know about what has happened so far. Subscribe to TimesLIVE here: https://www.youtube.com/user/TimesLive

NEWS ANALYSIS: Guptas showed contempt for SA, even while it feathered their ...

JOHN DLUDLU: Five steps Ramaphosa can take to restore confidence in the economy

PETER BRUCE: How the pilferers of state capture have left SA in darkness

JUSTICE MALALA: From power to the dock

EDITORIAL: Gigaba’s exit and the day the tide turned

NEWS ANALYSIS: Guptas showed contempt for SA, even while it feathered their ...

JOHN DLUDLU: Five steps Ramaphosa can take to restore confidence in the economy

PETER BRUCE: How the pilferers of state capture have left SA in darkness

JUSTICE MALALA: From power to the dock

EDITORIAL: Gigaba’s exit and the day the tide turned