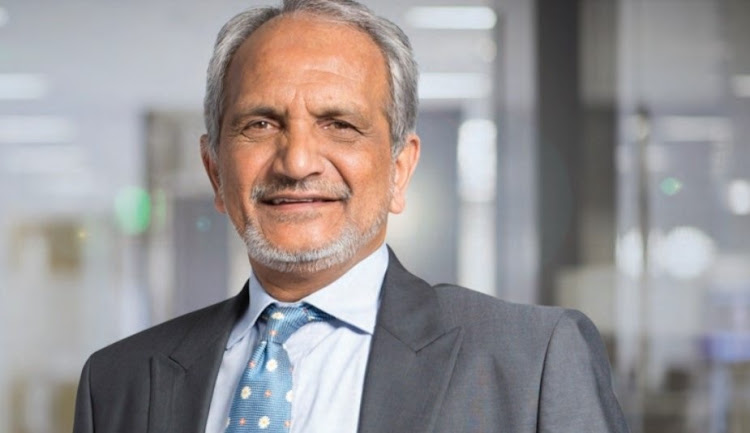 Saamsoodein "Shams" Pather, who has died in Cape Town at the age of 70 from complications related to Covid-19, was an iconic figure in SA's asset management industry.

He was a pioneer of developmental financing and helped initiate the Public Investment Corporation's Isibaya Fund in 1995, though he never worked at the PIC. It was SA's first fund with a specific mandate to invest in developmental assets.

He was a longstanding board member and chair of Coronation, one of the country's largest asset managers.

As lead independent director of seafood company Oceana from 1996, Pather drove a transformation process that made it consistently the most empowered company on the JSE.

Pather was born on October 24 1950 in Walmer Estate, Cape Town. His mother was a housewife who supplied the community with baked goods and his father worked in a hotel. Pather developed an early interest in business and investing while helping his uncles, who ran small businesses, with their accounting records.

He subsequently served on the UCT investment committee and used the opportunity to take a close interest in transformation issues and particularly the development of black chartered accountants.

He was passionate about education and even though he sympathised with the challenges facing black students at the university he was appalled by the trashing of libraries, disruption of lectures and exams and intimidation of fellow students.

When he started in the asset management industry in 1974 as a junior equities analyst it was in its infancy. He was one of the earliest in the game.

Over the next 30 years he worked at Norwich Union, Colonial Mutual Life Assurance, Southern Life and Real Africa Asset Management as an analyst, portfolio manager and chief investment officer.

He was a pioneer in bond trading at a time when the investment world was all about equities. He made bond investing more interesting, for many people, than equity investing.

He became focused on fixed income which is about bonds, corporate debt and cash. As a devout Muslim - a faith that does not believe in charging interest - this didn't quite gel for some people. But he was not a dogmatic person, he was a pragmatist. As he saw it, he had his beliefs but he also had a professional responsibility to give the best advice to his clients. That always came first with him.

In pursuit of this he became one of the first in the industry to use modelling.

He was known for his sharp mind and attention to detail. He stood his ground when he had a strong opinion but again was never dogmatic. He was always open to someone with a good argument.

He forgave honest mistakes, but not sloppy thinking. He believed in thinking things through in a measured, logical way. Investment decisions had to be well considered and backed up with strong arguments.

These qualities made him an inspiring and sought-after mentor. Many of the best in the industry today owe much of their success and passion for the profession to Pather's mentorship.

He joined the board of Oceana in 1996 when Real Africa Holdings acquired a stake in the company. He was lead independent director and chair of the audit committee.

Pather played a key role in steering Oceana's global strategy, starting with its acquisition of US company Daybrook Fisheries in 2015, which grew its market capitalisation by about 40%, making it one of the top 20 seafood companies in the world.

There were big risks involved. As an expert in acquiring and growing businesses and making investments work he knew what questions to ask in order to weigh the risks versus the opportunities and was intrinsic to the decision to go ahead.

He played a critical role in the transformation of the business and was part of the board that approved a transformational empowerment trust for staff, one of the first companies to do so.

Good governance was paramount to him. He believed that being a good corporate citizen and a good human being went hand in hand.

He saw that there had to be a balance between what was just and fair and what was necessary to achieve commercial success in a sustainable way. He provided guidance on how to achieve both without sacrificing one or the other.

Pather had a reputation for being a perfect gentleman, but those he worked with quickly learnt that he could be very down to earth and was no pushover. He was always meticulously prepared and expected the same of others.

He gave CEO Anton Pillay and members of his executive a hard time if he needed to. He asked probing, difficult questions, sometimes telling them to go away and do more research or give some investment or other decision more thought. But he never imposed himself.

He wore his in-depth experience and knowledge of the industry lightly, never using it to win an argument.

He made sure they never forgot that Coronation was first and foremost an investment-led business, whose sole purpose was to deliver "the alpha" for their clients.

It wasn't about growing the company or about the share price or about targeting profitability. It was only ever about the outperformance of portfolios above their benchmarks.

He accepted that, given the nature of the beast, there would be periods of underperformance, and never came down on the investment team because of it - as long as they could answer his questions and confirm that the process was intact and the approach was correct.

In 2012 he approved a major strategic decision to close 80% of Coronation's institutional business to new clients to benefit existing clients.

It remained shut to new clients for about five years.

Pather, who was diagnosed with pancreatic cancer a couple of years ago, is survived by his wife, Fozia, and three children.

The four pillars of Capitec's success

The four pillars of Capitec's success