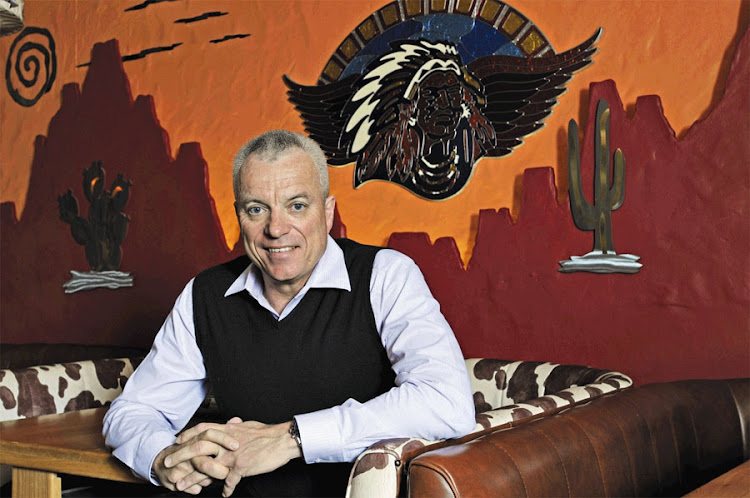 Pierre van Tonder, who has died in Cape Town at the age of 61 a week after shooting himself in his Sea Point apartment, was the MD and CEO of Spur for 24 years.

He transformed it from a small business of about 40 restaurants into a market-leading group boasting 631 restaurants locally and abroad, including upmarket brands such as steakhouse chain Hussar Grill, hamburger chain RocoMamas, John Dory's seafood chain, the Nikos Coalgrill Greek chain and Panarotti's pizza and pasta restaurants.

A no-nonsense leader who always gave his honest, frank opinion

Mentored by Allen Ambor, who founded Spur in the late '60s, Van Tonder was front and centre in the company's strategic direction.

He joined Spur in 1982 after ringing then manager Chris Dunn. He said he was on two weeks' leave from his job as a junior manager at the Midnight Grill, and asked if he could shadow Dunn during that period.

When the two weeks was up Dunn decided he needed an assistant and offered him the job. Van Tonder never looked back.

In November 2020, during his final financial results presentation as CEO, he came close to tears as he said Spur had been "part and parcel" of his life for 39 years.

Van Tonder, who was born in Cape Town on September 9 1959, was highly respected and liked by analysts who regarded him as a consummate, professional manager.

Brisk and to the point, he was a no-nonsense leader who always gave his honest, frank opinion without any corporate spin. He engaged with the market in an open, transparent way. He told them what they wanted to know without hiding behind the King code, corporate governance and PR - ruses adopted by many CEOs. With him, what you saw was what you got.

In spite of his blunt, down-to-earth manner he was always warm and friendly and willing to engage with those who were interested in the business he was managing.

Under him, Spur was conservatively managed, unlike many of its competitors.

He never grew it by expensive acquisitions which meant taking on debt. Spur never used debt. It grew organically for the most part, bringing in mostly very small and interesting businesses and then investing heavily in the underlying management team.

When he bought RocoMamas for R27m in 2015 it consisted of three basic outlets which became the powerhouse behind the Spur corporation's growth.

He knew how to identify small, potentially successful businesses that would resonate with what the consumer wanted, then happily invested in growing those franchises nationally and internationally.

This was also his modus operandi with the highly successful acquisition of Hussar Grill in 2014.

Spur took a bit of a knock in Australia and New Zealand, the graveyard of many fast-food and retail companies over the years.

But compared to what its competitor, Famous Brands, lost in the UK and Northern Ireland, where it had to write off R2.1bn, his losses of around R20m in Australasia were insignificant.

He moved into the UK market thinking the Spur Corporation brand would resonate with consumers there. He misread the market and the desire of consumers to try something different. Ultimately he had to close down its operations in the UK, including Northern Ireland, as in Australia and New Zealand.

But the biggest issue for him was that while shareholders were unhappy with the ongoing losses and impairments to the group's offshore operations and wanted management to cut and run, he felt honour-bound not to summarily dump franchisees who'd put their own money into these businesses.

He insisted on an orderly transition so that everyone walked away with a degree of elegance in spite of the losses.

He was sharply criticised for not walking away faster from their loss-making operations in Australasia and the UK.

But his reluctance to cut and run went back to the Spur ethos he'd done so much to develop, that franchisees were the main driver of the business and had to be looked after.

So he took longer to wind down these loss-making offshore operations than shareholders demanded and they weren't amused.

It is not yet known whether he resigned of his own volition in December 2020 or was pushed.

A physically large man, he had lost a lot of weight, which led to speculation among some analysts at least that he may be ill, but it seemed the reason for his weight loss was that he'd become a fitness fanatic.

Explaining his decision to resign, he said that he'd been at Spur for a long time, most of his family had moved overseas and he wanted to spend more time with them.

While there may have been no push there was a feeling among the board that a refresh of the company's managerial structure, culture and brand needed to happen to take it into a new-look post-pandemic dimension after the ravages of Covid, which saw sales drop more than 90% in one month.

Spur's single biggest issue was that unlike Famous Brands and other local competitors with takeout and delivery operations, it was a sit-down business. So it was much more heavily impacted by the lockdown closures, alcohol bans and social distancing restrictions.

Before Covid delivered its devastating blow Van Tonder was rocked by something more personal. After selling his shares in 2017 and resigning as executive chair the following year Ambor, with whom Van Tonder always seemed to have a cordial relationship, launched a vitriolic attack on him for supposedly not honouring a gentleman's agreement that Ambor would stay on as non-executive chair.

A gentleman to the core, such an accusation would have hurt Van Tonder to the quick.

He is survived by his wife Jane and children Margot and Jordan.

SAMANTHA ENSLIN-PAYNE: Pulled to buy more stuff — and pushed to dump it

SAMANTHA ENSLIN-PAYNE: Pulled to buy more stuff — and pushed to dump it