Khumalo was born in Vryheid, in KwaZulu-Natal 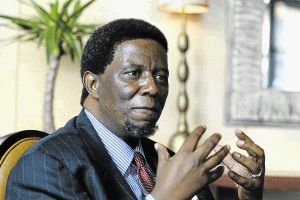 Professor Bongani Khumalo, who has died in Johannesburg at the age of 68 after contracting Covid-19, was deputy CEO of Eskom, chair of Transnet, chair and CEO of the national lotteries operator Gidani, a director of Anglo American Platinum and a senior member of the SABC board.

His greatest interest and expertise were in the field of corporate governance and ethical, value-centred business leadership, to which he brought a strong scholarly, but also practical, element.

His was one of the earliest and most prominent voices in the business community calling for awareness and action to combat the spread of HIV/Aids, which he perceived as a major threat while working for the International Red Cross in the 1980s.

He was the business representative on the South African National Aids Council headed by then deputy president Jacob Zuma.

He was erudite,
measured and
diplomatic

In 2000 he became a special adviser on HIV/Aids in the office of the presidency.

He initiated the world's first postgraduate diploma in HIV/Aids management in the workplace at Stellenbosch University and the Medical University of SA (Medunsa).

He said the intention of the programme was to educate managers and employers to deal with their infected workforces.

He said too little attention was being paid to Aids awareness and behaviour modification, which, he warned, was a matter of survival.

"Either we win or we're vanquished."

He was the driving force and first chair of the Africa Centre for HIV/Aids Management at Stellenbosch University, which made him an honorary professor of industrial psychology.

Erudite, measured and diplomatic, he was as much at home in the scholarly as in the corporate environment.

He was a member of the University of SA (Unisa) council and chair of its Graduate School of Business Leadership.

Khumalo was born on August 26 1952 in Vryheid, in KwaZulu-Natal, and matriculated at the famous Adams College mission school in Amanzimtoti.

He was the communications officer for the South African Council of Churches in the politically charged and dangerous atmosphere of the 1970s and early '80s when it was targeted by the apartheid security police.

After a three-year stint in advertising he worked for the International Red Cross until 1991, when he joined Eskom. He became head of human resources in a strong post-1994 senior management team, responsible for human resource development and transformation.

He blamed the future disaster at Eskom on the government's failure to implement the team's recommendations, mainly to bring back plant and build power stations.

He was appointed deputy CEO of Eskom in 2000 but lost the top job to Thulani Gcabashe.

In 2001 he was appointed to replace Louise Tager as chair of Transnet following the controversial $28.85m (about R230m at the time) payout to Coleman Andrews, the former CEO of South African Airways who left in 2001, 14 months before the end of his contract.

Transnet, which controlled 80% of SAA, was badly tarnished by the scandal and Khumalo was brought in to strengthen corporate governance and transparency. He left in 2004 and looked on in dismay as his legacy was trashed during the state capture years.

In 2003 he became the empowerment partner and chair of advertising agency Grey SA. The partnership ended acrimoniously some years later over a dispute about the value he felt should have accrued to him.

In 2006 he became MD of JHI Real Estate. In 2007 he started Gidani and led its successful bid for the licence to operate the national lottery.

The award was set aside after the Pretoria high court found that the process was "flawed", but reinstated several months later.

In 2011 Gidani was fined R15m after being found guilty by the lotteries board of security lapses that raised questions about the probity and financial integrity of the lotteries operation.

In 2014 the lottery licence was awarded to Ithuba in spite of Gidani being recommended by the board.

Khumalo challenged the decision in the Pretoria high court, which ruled that it was invalid and sent it back to trade and industry minister Rob Davies for reconsideration. In 2015 he re-awarded it to Ithuba.

Khumalo used his considerable experience of lotteries to advise East African governments, including those of Uganda and Tanzania, on how to start and operate their own national lotteries.

He was appointed to the board of the SABC in 2013 but clashed with then communications minister Faith Muthambi over her interference with the board and support for controversial chief operations officer Hlaudi Motsoeneng.

Khumalo publicly challenged the board's decision to back the permanent appointment of Motsoeneng in 2014 after
a damning report by then public protector
Thuli Madonsela found Motsoeneng had fabricated his qualifications, purged those he disagreed with and irregularly increased his salary from R1.5m to R2.4m in one year.

Khumalo resigned early in 2015 when he received a letter from Muthambi asking for reasons why she shouldn't recommend his dismissal to president Jacob Zuma.

He told a 2016 parliamentary inquiry into the SABC that parliament should accept responsibility for not holding the minister to account.

He said MPs should be more stringent when appointing board members. Most of them didn't understand or care about corporate governance, interfered with the executive and allowed the government to interfere with the board. This was also why most state-owned enterprises failed, he said.

Khumalo is survived by his wife Nelisa and two children. Two sons and a nephew were killed in a car accident in 2002.

Peter Duminy’s unwavering opposition to apartheid was a feature of his long career, from a training in law through many distinguished years in ...
Features
4 months ago

Makwetu had a no-nonsense, professional approach to his job that was informed by a successful career in the private sector
Business
5 months ago
Next Article

Making a clean break from coal is far from easy, as Anglo learns

Making a clean break from coal is far from easy, as Anglo learns