Fraud is often perpetrated by representatives of independent financial advisers, who have contracts with insurers 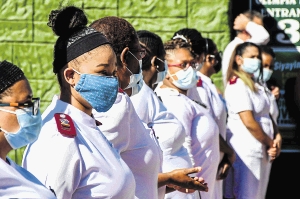 Civil servants such as nurses and teachers have been targeted for fraudulent insurance deductions. Picture: GALLO IMAGES/DARREN STEWART

Fraudulent insurance policies are a source of misery for many civil servants in this country and have been for years.

The issue is making headlines again, with teachers employed by the state reporting that they've discovered unauthorised deductions from their salaries, some dating back a year.

One realised after a year that she had been paying Old Mutual R350 a month for a policy she had never entered into.

Another was caught in this scam twice — first in June 2012 and again in February 2015 — both times with Old Mutual policies.

“We’re easy targets because we don'’ get regular pay slips,” said one teacher.

Though all of those interviewed have been reimbursed, they said it was a time-consuming and costly exercise.

It appears as if the fraud is often perpetrated by representatives of independent financial advisers, who have contracts with insurers. The representatives are incentivised to find clients to which the independent agent can sell policies. The reps allegedly source or buy the personal information of state employees. All they need is an ID number and the civil servant’s employee number or Persal (Personnel & Salary System) number and they’re able to write the policy.

When the victim picks up the irregular deductions and reports it to the insurer, the insurer reimburses the victim.

Basil Manuel, the executive director of teachers’ union Naptosa, said illegal deductions from civil servants’ salaries is an ongoing problem. “I can’t comment on the prevalence, but I reckon it’s rife because people don’t interrogate their pay slips,” he said.

Both Old Mutual and Emerald Life have been asked to provide the regulator with detailed information relating to the allegations, said Kedibone Dikokwe, the divisional executive of conduct of business supervision at the Financial Sector Conduct Authority.

In response to questions, Emerald Life CEO Etienne van der Westhuizen said that in cases such as these the insurer receives an application for insurance from an agent. The agent has acted fraudulently and completed the application form using the personal information they have obtained about a particular person.

“While Emerald Life does verify the information that it receives from agents, in certain instances the fraud is successfully executed,” he said.

“Unfortunately, fraud is prevalent in the insurance industry as agents and brokers present insurers with fraudulent applications in order to increase the commission paid to them,” he said. For this reason, Emerald Life wants to introduce biometrics into the client acceptance process, he said.

On receipt of a complaint of fraudulent conduct, Emerald Life investigates and if it is found that the agent acted fraudulently and/or was in breach of the code of conduct issued under the Financial Advisory and Intermediary Services Act, disciplinary or legal action is taken against the agent. This may include withdrawal of the agent's mandate to sell Emerald Life’s policies and debarment proceedings to prevent the agent from acting for other insurers, Van der Westhuizen said.

Emerald Life has taken action against agents, but he says he’s “unable” to say how much the company had paid out to victims of fraud.

A spokesperson for Old Mutual said the matter is “still being investigated” and that Old Mutual is working with the provincial Treasury’s anti-fraud unit and the police’s commercial fraud and statutory investigations unit “to identify such incidents earlier, more frequently and accurately”.

Back in 2008, ombud Pillai said it was apparent there were “weaknesses in the system”.

It seems there still are.

“In my view, the refund of premiums merely serves as a cover-up to conceal a very large and widespread problem, which appears to target vulnerable income earners who receive their salary payments through the Persal system,” he said.

“The mere refund of premiums does not address the systemic problem, nor is it fair to the victims of the fraud.”

If the bank doesn't hear from you, it reinvests your cash
Money
2 years ago

HANNA ZIADY: Are SA’s credit providers due their own PPI moment?

In light of the UK’s payment protection insurance scandal, the Financial Sector Conduct Authority should start investigating compliance with new ...
Opinion
2 years ago
Next Article

Cross-border inheritance: what you need to know

Cross-border inheritance: what you need to know