When markets plummet the way the JSE and global markets did in March and your investments show large losses, it is easy to get very focused on the short-term ups and downs and to forget the bigger picture.

The 30% fall in the market over the past quarter has meant large rand losses for many investors.

In April, despite terrible economic news, the markets fared better - the FTSE/JSE all share index, for example, came back with 14% in total returns.

But the bounce in equities and gains in other asset classes in April hasn't been enough to compensate for the first-quarter falls. According to Gielie de Swardt, head of retail investments at Sanlam, the year-to-date returns for equities, listed property and bonds as measured by major indices for those asset classes remain negative.

And we can't be sure that those gains won't unwind on the back of more bad news, leading to investors taking a dim view of the JSE.

Focusing on these short-term movements may help you understand changes in your investment statements, but they are not very helpful when you are investing for the long term, such as for retirement.

However, Old Mutual's "Long-Term Perspectives" outlook, released this week, may help you get the bigger picture with a focus on the long-term returns of asset classes.

It shows that over the past 90 years, equities have returned 13.7% - 7.7% above inflation for the period, proving that despite their ups and downs, you need to be invested in these assets to grow your money and beat inflation.

But to achieve those average returns, you needed to stay invested - if you disinvested and happened to miss some of the best times in markets, your returns would be dramatically lower, "Long-Term Perspectives" shows. To illustrate that point, Old Mutual shows how the returns reduce if you miss just the 30 best days in the market over the past 20 years - your return almost halves to 7.9% a year.

Many investors think they know when to capture those days and when to miss the bad ones - and they often believe that pulling out of the market at times like these is a good way to miss the worst of it.

But how you behave is one of the most important risks in a financial crisis, Graham Tucker, portfolio manager at Old Mutual Investment Group's Macro Solutions, says.

Many people go into survival mode and lose sight of what they are trying to achieve, he says. At times like these "our focus starts to narrow and focus on how this will play out in the short term when we should be doing the opposite", Tucker says. 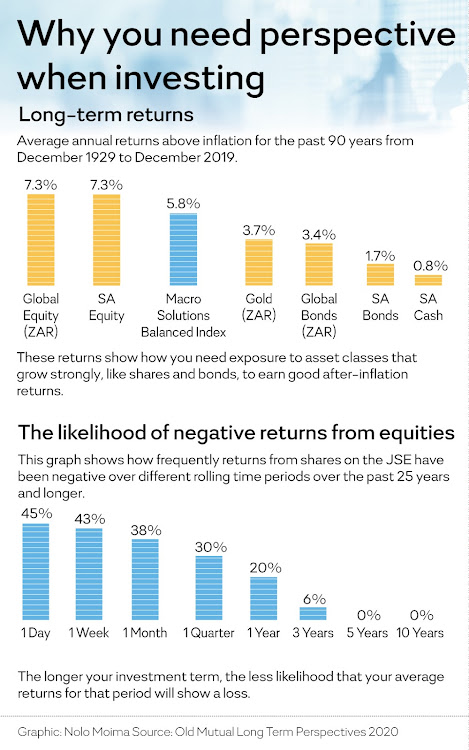 Investors tend to follow the herd. Because markets are falling and some investors are selling, many other investors want to get out, he says.

But "we have very little ability to accurately and consistently call markets in the short term".

Old Mutual's analysis shows that if you invested in equities for a day with a view to making a profit, you could have called it wrong on 45% of the days between 1995 and 2019.

Similarly, the odds of getting it wrong over a month or a quarter are also high - 38% and 30% of rolling month or quarterly returns were negative during these years.

As you lengthen your time horizon, however, you reduce your chances of making a loss, Tucker says.

No five- or 10-year periods in local equities during these years had negative average returns, "Long-Term Perspectives" shows.

Time is your friend is one of the lessons the annual publication reminds us.

In the short term there is a lot of noise and investor sentiment, but over the longer term the fundamentals of companies in whose shares you choose to invest become more important, Tucker says.

Wynand Gouws, financial adviser at Gradidge Mahura Investments, says another lesson the history of the market teaches is that markets do recover from crashes - SA has had six since 1975 and in all except that after the Soweto riots the JSE recovered within 18 to 30 months.

He says it is impossible to predict what the market will return, and when, particularly during a crash, when markets are reacting emotionally and erratically.

The Sasol share price moves in March illustrate how erratically the market can behave during a stock market crash - in a few days you could have lost 40% or made 45%.

Both Gouws and Tucker highlight how the 2008 market crash was followed by exceptional returns.

Even though it was impossible at that time to determine when the market would recover, the crash of 2007/2008 was followed by exceptional returns in 2009, with the market recovering by more than 20%, followed by double-digit returns in 2010, 2012 and 2013, Gouws says.

Investors who stayed the course were thus rewarded, he says.

Gouws says that when you focus on short-term uncertainty you react emotionally, leading to destructive behaviour such as disinvesting and missing the recovery.

You have to get both right, which is extremely difficult, he says.

Reserve Bank bought R11.4bn worth of state bonds in April

The return of rationality in the markets depends on real and effective action by business, government and central banks
Features
11 months ago

Treasury to increase weekly bond auction by more than a third

R1.57bn more in bonds will be sold from May 19 to help plug the government’s budget deficit
Economy
11 months ago

Investors for the ultra-rich put money into private debt

Banking apps empower you to reverse that dodgy debit order

No proof, but FNB blames client for her loss

The constant rand plan a step to wealth creation

Banking apps empower you to reverse that dodgy debit order

No proof, but FNB blames client for her loss

The constant rand plan a step to wealth creation