The original business rescue plan, intended to save most of the jobs at the airline — but Mango has confirmed that a greater number of employees will now be affected 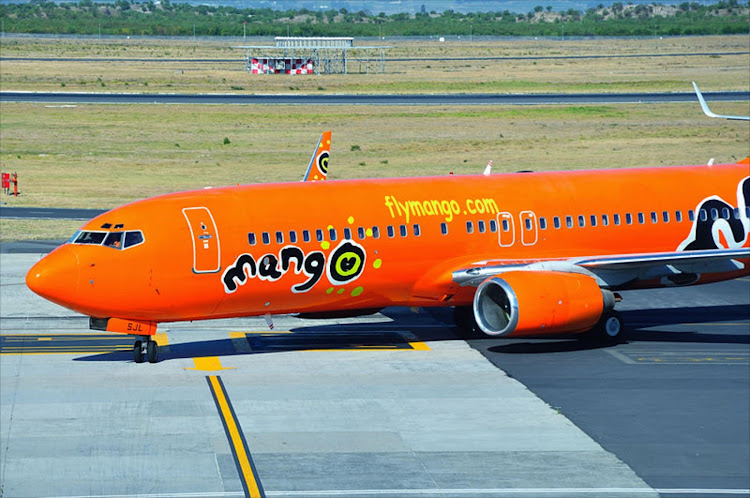 Mango is to be mothballed while it seeks a strategic equity partner, dashing any hopes of the low-cost carrier being back in the sky by December for the lucrative festive season.
Image: wikimedia commons

Mango is to be mothballed while it tries to get a strategic equity partner in place, dashing any hopes of the low-cost carrier being back in the sky by December for the lucrative festive season as originally envisaged in its proposed business rescue plan.

It also means that more of the 708 jobs at Mango will be lost than originally thought.

The original business rescue plan, published on October 29, intended to save most of the jobs at the airline — but Mango has confirmed that a greater number of employees will now be affected.

Mango’s creditors were meant to vote on Monday on whether to give the low-cost carrier’s business rescue plan the green light but the meeting was adjourned by a maximum 15 business days after the carrier’s shareholder SAA requested it so the plan could be amended to include the proviso that the airline first find a strategic equity partner before launching operations.

Late on Monday afternoon, Mango said that it “is immediately clear that the airline will be mothballed for a considerable period, as the process of securing an investor will take some time”.

“Accordingly, the amended plan will inevitably have to contemplate a greater number of employees being potentially affected by the restructuring than is the case in the current plan that was published on 29 October 2021. As is now a matter of public record, the business rescue practitioner of the company, Sipho Sono, had already initiated a process to invite employees to apply for voluntary severance packages as part of mitigating the need for retrenchments in terms of section 189 of the Labour Relations Act.

“This aspect of the plan will continue and the BRP [business rescue practitioner] was assured by SAA and the department of public enterprises that funds will be released during the course of this week, or at worst early next week, to implement the voluntary severance packages,” the statement read. It said applications for packages will close on Friday.

This latest development is seen as a blow by the Mango Pilots' Association chair Jordan Butler, who said it meant “sacrificing the entire workforce at Mango” and was a poor outcome.

“The business rescue practitioner had also confirmed he would be able to fetch a much higher price if the airline was sold as a going concern, but SAA and the Treasury have refused to fund it so Mango can’t implement the plan,” said Butler.

He said that while the condition that there be a “significant onboarding of  a strategic equity partner” had to be included in the amendments to the plan it “does not mean that a deal has to be fully concluded for Mango to resume operations” — only “substantially concluded”.

Butler said SAA and the public enterprises department had agreed to “pay across R320m to pay out staff voluntary severance packages and possible retrenchments”, it remained to be seen whether “SAA and Treasury live up to their commitments”.

He said an amended plan would be published in 10 business days with a vote by creditors to follow five working days later.

Mango said SAA had proposed a motion for the meeting to be adjourned to incorporate certain proposals that “will enable both SAA and the ultimate shareholder, namely the department of public enterprises, to support the plan”.

“The substance of SAA’s proposed amendment is that the plan be amended to effectively cater for resumption of operations only once the process of securing an investor has been concluded, with a preferred bidder having been identified,” said the statement.

Mango said that after deliberation, it was agreed that meeting should be adjourned to “consider and effect the proposed amendments and thereafter reconvene the meeting of creditors in order for the affected people to consider and vote on the amended plan”.

SAA said in a statement, also issued late on Monday, that it had “presented its view to the creditors of Mango”, adding there “are no reasonable prospects of Mango succeeding should it be operationalised before obtaining an investor or equity partner”.

“SAA’s position is that this process should be finalised as soon as possible. SAA says operations should only resume thereafter, thus mitigating the risk of Mango not being able to financially sustain itself going forward. SAA does not believe the current plan presented by the business rescue practitioners that Mango resume operations in December is feasible and asked all stakeholders for the meeting to be adjourned for the current plan to be reviewed and for an amended version to be presented.”

It said there were “no reasonable prospects of Mango succeeding should it be operationalised before obtaining an investor or equity partner”.

“SAA is looking forward to co-operating with the BRPs as they are finalising their plan,” it said.

At the weekend, Butler had said that SAA’s insistence on the plan being changed to include the proviso of a strategic equity partner being in place could delay Mango’s relaunch for some time as “one must consider the Public Finance Management Act’s procedures, which take time”.

If the airline’s business rescue plan is amended, it's back to the drawing board
Business
2 weeks ago

Mango grounded by lack of funds for restart