Makwetu had a no-nonsense, professional approach to his job that was informed by a successful career in the private sector 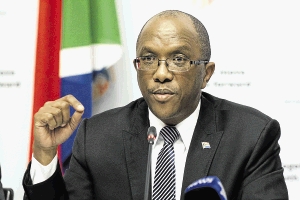 In the years after Kimi Makwetu, who has died in Johannesburg at the age of 54, became auditor-general in 2013, nobody paid terribly much attention to him or his office.

Least of all the municipalities, state-owned enterprises (SOEs) and government departments whose books he audited every year, revealing an increasingly terrifying tale of irregular expenditure. Or the so-called watchdog committees in parliament, which were supposed to be exercising oversight and holding those responsible to account.

By 2017 the quietly spoken, dignified and until then endlessly patient Makwetu had decided enough was enough. That year he reported to parliament that annual irregular expenditure had tripled in the four years since his appointment, to R45bn.

The real figure was likely closer to R65bn, he said. But not all government departments, municipalities and SOEs had reported their financial results as required by law. Many that did report had hidden documents from his auditors that, he suspected, contained evidence of much more irregular expenditure than had come to light. But his office did not have the power to investigate or refer cases for investigation, so serial offenders were getting off scot-free.

He believed there were countless cases where a prima facie case for criminal prosecution existed, but not a single case, he pointed out, had been prosecuted in the 18 years that the Public Finance Management Act had been in force. He blamed the culture of impunity this created for the fact that irregular expenditure kept rising.

This wouldn't be necessary if parliament exercised its oversight role more effectively or indeed at all, he told Business Times in an interview, that revealed enormous frustration and a determination not to give up.

It was parliament's job to get investigative institutions to investigate irregular expenditure, which he said he believed was more often than not a euphemism for theft.

And so he asked parliament to give his office the power to refer cases to investigative agencies. For too long government officials had been secure in the knowledge that audits would have no consequences for them, he said. This had to change.

"I want criminal investigations and prosecutions." To avoid a situation "where we use an agency that may be captured", he asked to use private sector forensic institutions.

Makwetu had a no-nonsense, professional approach to his job that was informed by a successful career in the private sector where for a while he ran Deloitte's forensics unit. Out of a sense of public duty he resigned in 2007 to become the deputy auditor-general.

Born in Gugulethu, Cape Town, in January 1966, he benefited from wise parents, good education and sheer hard work. Because of political violence disrupting education in townships in the '80s his parents sent him to St John's College in Mthatha, a government school he described as "one of the best schools that never gets spoken about".

It expected excellence and he delivered. After matriculating there he studied accounting at Unisa and the then University of Natal, did his articles at Deloitte and became a chartered accountant.

He refused to accept that standards in the public sector should be any different from those in the private sector. In 2018 amendments to the Public Audit Act gave him the investigative and other powers he'd insisted on. This didn't lead to the results he'd hoped for by the time he reached the end of his seven-year term this month.

According to the national and provincial audit outcomes for the 2018/2019 financial year, irregular expenditure soared to R62.6bn, up from R51bn the year before.

But the amendments did at last confront delinquent officials with the real possibility of consequences, as became evident in the increasing number of incidents of intimidation of his staff, including death threats.

He was given a permanent bodyguard in December 2018 after a risk assessment by the police. It's a perverse measure of his success that state officials are clearly no longer ignoring the auditor-general's office.

Makwetu, who was diagnosed with stage 4 lung cancer in June 2018, is survived by his wife Miranda and three children.

Maluleke, who replaces Kimi Makwetu at the end of November, will be SA's first female auditor-general
National
7 months ago

How did we fall so far so quickly? Makwetu asks South Africans
National
8 months ago
Next Article