Hard-hit commercial landlords believe workers will be back 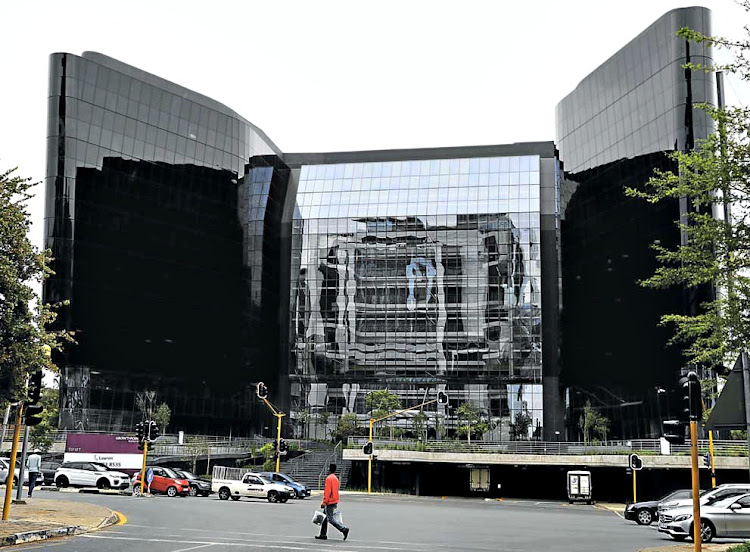 Growthpoint’s new office building at 144 Oxford in Rosebank has signed up Anglo American, which is relocating from Johannesburg’s CBD. Picture: Alon Skuy

Top office nodes such as Sandton — already struggling with an oversupply of space — have been hit hard by Covid-19 as companies encourage employees to work remotely and in some cases have had to reduce their space as they find themselves under the cosh.

But this does not mean the death of the office in SA.

It’s easy to imagine great swathes of vacant office space across the country like a scene out of an apocalyptic nightmare, but SA’s biggest listed-property owners believe the main disruptions caused by the pandemic will be temporary.

That’s not to say the office market is not in for some hard times. Even before the pandemic it had been struggling for at least three years because of the flailing economy, with nodes such as Sandton at one stage having a vacancy rate of up to 25% in some locations.

Property economist Francois Viruly says the average vacancy factor for A- and B-grade office properties is about 10% across the country, with Johannesburg the worst hit with vacancies of 12.5%.

Viruly says Durban and Cape Town are faring better from a vacancy point of view because there is less speculative development in these centres. While A- and B-grade offices have a vacancy factor of about 8% in Durban, Cape Town is the lowest with about 5%.

“I would say the market that is most in equilibrium at the moment is the Cape Town office market.”

In its latest investment review, property consultancy JLL said that in “the short to medium term, it is anticipated that office vacancies will continue to rise, whilst rentals will decrease”.

“As new developments come to market and attract tenants away from existing stock, the risk of rising vacancies and reduced rentals remains imminent. Rosebank, Waterfall and Sandton [all in Johannesburg] are particularly at risk, with the highest development activity,” JLL says.

Growthpoint Properties CEO for SA Estienne de Klerk says while the pandemic is a “left field” event that has created short-term anomalies in the market, Growthpoint doesn’t believe that large financial institutions or big corporations are going to “totally change the way they have been operating”.

Working from home is feasible in the short term but not permanently.

“Serious corporates still want quality offices and that is evident from a recent transaction we have done in Rosebank with Anglo American. We have also been renewing some long-term leases of 10 years at offices in Alice Lane in Sandton.”

Anglo American is relocating from the Johannesburg CBD to Growthpoint’s new building, 144 Oxford, in Rosebank.

But De Klerk says the effect of the weak economy on the office property market was bad before the pandemic.

“Covid-19 has just made the situation significantly worse. We have seen companies retrench staff. The estimate is that we have lost 3-million jobs. There is probably more if you just look at the restaurant industry and the unregistered workforce. Big corporate South Africa has also been shrinking over the past five years and that’s played out in the oversupply in offices.”

Paul Kollenberg, Growthpoint’s head of asset management for the office sector, said the group’s office vacancy factor was sitting at about 15% but that this included its Woodlands property, which Deloitte recently vacated to move to new premises in Waterfall.

Although the group had found new tenants in Altron and engineering group DRA, the Covid pandemic had delayed occupation. Taking this into account, its actual office vacancy factor was about 14%.

But De Klerk says Growthpoint believes the office property market is “still a sustainable sector” and that its portfolio is dominated by strong tenants such as Anglo American, Absa, Discovery and asset manager Ninety One.

Kollenberg says that even in the midst of a struggling market there are certain nodes that are “really busy”.

“In Rosebank there is demand, as well as in Bryanston and in Cape Town’s Foreshore.

“But some nodes have been really hit and even before Covid there were nodes that hadn’t seen rental growth and had lost tenants. You either hold on to your tenants by reducing your rentals or you lose tenants. Parktown hasn’t been fantastic and Rivonia has also been difficult, while Midrand has also taken a long time to let.”

The average vacancy factor among A- and B-grade office space

Kollenberg says there is another dynamic at play in that tenants are very specific about what they are now looking for. For instance, previously it was enough if the property was located in Rosebank, but now tenants want the building to be near Oxford Road and the Gautrain station and not on Jan Smuts Avenue.

Pieter Strydom, Redefine Properties’ asset manager for offices, says the market is “tough at the moment” and that the amount of new development that has come online in the past two years “has created pressure on secondary nodes even before Covid-19".

Redefine’s office vacancy factor is about 13.2%.

Strydom says that in the short term he is expecting a spike in vacancies across the office market in general because of business failures, space consolidation and flexible working driven by the shutdown.

“I would like to emphasise that working from home will have a short-term spike, but in the longer term there will be a balance with people returning to a formal office environment.

“I would estimate this impact to be around 20%-25% [of the workforce working at home] over time. Although working from home is feasible in the short term and functional, people can’t work like that on a permanent basis.”

He says most people’s homes are not equipped for office work. As restrictions ease, people may be distracted by their day-to-day lives, which could increasingly eat into company time.

This is exacerbated by load-shedding.

“All the clients we have been talking to say it’s been great and everyone has been operational and doing their best to maintain efficiency at home and then Eskom hits and no-one can dial into a conference call because their laptop battery has gone dead. If you are in a traditional office space, you have a generator and backup power and people can remain functional during load-shedding.”

Strydom, however, does see companies adjusting their space requirements — for example with 80% of their workforce based at their head office and the remainder working from co-working spaces.

Co-working stations generally rent space from a property owner and then sublet it to others who may use the space available as a temporary office or hot desk, depending on the need.

Viruly says while there are important structural changes taking place in the office market, it is likely to still feature prominently in corporate life, especially as it plays an important role in relaying a company's corporate culture to employees, which is impossible to recreate working at home.

Growthpoint’s Kollenberg says research has shown that while it's easy for people to do business with others virtually if they have a prior relationship with them, the same is not true of new business.

And it is also harder to brainstorm ideas or be creative working in isolation from your colleagues.

Viruly says a likely change in the coming years is that office owners won’t just be letting or selling space but will look increasingly like “hotel groups that sell a service”.

He says this may include value adds such as a coffee shop or even a shared receptionist in an office building.

This could also lead to increased opportunities in the co-working space sector, which generally provides these add-ons.

Co-working group WeWork, which has three locations in SA, says that it knows “from talking to both existing members and new clients in South Africa that businesses are looking to re-evaluate their workplace strategies and prioritise their employees’ workplace experience, as people adapt to a more flexible way of working”.

Liberty Two Degrees relies on its diversification to survive pandemic