$4.2bn loan hinges on pledge to reform the economy and restore public finances

The government will likely have to commit to restoring the public finances to health and implementing reforms to boost the economic growth rate as it negotiates with the International Monetary Fund (IMF) over a $4.2bn (R72.6bn) loan that would help to plug SA's enormous fiscal hole.

Dire budget numbers that finance minister Tito Mboweni presented on Wednesday showed the government's funding requirement this year has ballooned to R777bn - more than double February's budget forecast. But it confirmed it plans to raise more than $7bn of this from international financial institutions including the IMF, which has so far provided Covid-related emergency financing worth about $65bn to 74 countries.

And while the market has welcomed SA's plans to tap international funding this year, there are growing concerns about its ability to fund itself in coming years amid widespread scepticism about Mboweni's ability to deliver the massive spending cuts he said would be needed to stabilise the government debt and prevent a sovereign debt crisis within three years.

Rating agency Moody's said in a report on Thursday that the rise in the government's debt burden, to 82% this year, was among the highest in its ratings peer group and "stabilising debt by 2023 in line with the government's target laid out in this budget will be very difficult to achieve given the challenging growth outlook and fiscal rigidities". 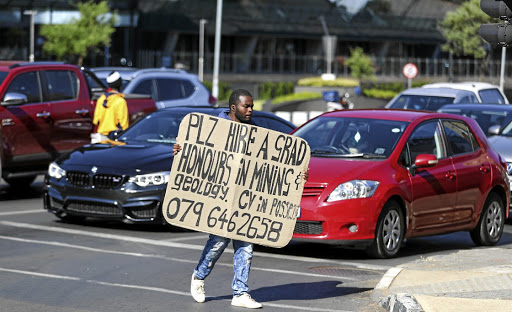 Radzuma Tshimangadzo walks holding a placard with his qualifications as he seeks a job, at an intersection in Rosebank, South Africa, June 23, 2020. Picture: Siphiwe Sibeko/Reuters

Rival Fitch was more blunt, saying on Friday: "The South African government's intention to stabilise debt levels within four years, as set out in this week's emergency budget, is unlikely to be achieved."

Fitch pointed to SA's persistent challenges in reducing government spending, boosting growth and insulating its public finances from struggling state-owned enterprises, as well as the impact of the Covid pandemic.

Mboweni had said in April that SA would approach the IMF to draw the $4.2bn to which it was entitled under the Fund's Rapid Financing Instrument (RFI), which is designed to assist middle-income countries affected by the Covid crisis.

This was a big move for SA, which historically has avoided IMF lending because of the conditions the fund has tended to impose. But the RFI comes with significantly less conditionality than the typical IMF structural adjustment bailout programmes, and the ANC conceded last month that it would support the government's application.

SA also intends to source funding from the World Bank and African Development Bank as well as the New Development Bank (formerly the Brics Development Bank), which last week approved a $1bn Covid-19 emergency programme loan to SA and could make available up to $1.5bn more.

Mboweni told journalists on Wednesday that the IMF and Treasury were in "protracted" negotiations over the loan, which is expected to be finalised only next month.

"The discussions are tough and difficult but I think we might have come to a common understanding," Mboweni said. He emphasised that the ANC leadership supported the approach, as long as nothing was done to undermine SA's national sovereignty.

The discussions
are tough and
difficult ...

He did not reveal what was at issue in the talks with the IMF. But sources close to the process indicate that this would involve the letter of intent that countries have to submit to the IMF to motivate their applications for the fund's emergency finance packages.

Generally, countries have had to commit in such letters to put measures in place to stabilise their public debt and to reform their economies to boost growth coming out of the crisis - though the IMF, which disburses all the funding upfront for its emergency facilities, has no mechanism to enforce these conditions as it does with structural adjustment programmes.

Sanlam Investments chief economist Arthur Kamp said the funding the government had to raise this year was more than SA's entire 2019 domestic savings flow of R740bn. Unless the government could bring in more foreign money, its borrowing requirements would entirely crowd out private sector investment.

The government has already increased its borrowing on the domestic market to close the funding gap this year, and with interest rates on its long-term borrowing having risen sharply, the budget review shows it plans to more than triple its borrowing in the cheaper short-term market, as well as resort to loans from international institutions.

The approach marks a shift from the government's efforts historically to borrow longer and mainly in the domestic market. Economists caution about the increased "rollover risk" from higher levels of short- term borrowing.

Business Unity SA cautioned on Friday that while the planned $7bn in borrowings from international financial institutions was necessary at this time, foreign currency borrowings with a volatile exchange rate could render repayments equally volatile.

New Development Bank vice-president Leslie Maasdorp said on Friday that while the $1bn loan was to support health-care interventions for the crisis, the bank could also advance further loans to SA of up to $1.5bn to support its economic recovery, though some of this might go to the private sector rather than directly to the government.

Mboweni said in Wednesday's budget speech that the government was already spending 21c of every rand it raised in revenue to service its debt - which is almost as much as it spends on health care - and warned that if the government did nothing the debt-to-GDP ratio would rise to 106% by 2023/2024 and keep rising.

While monetary policy is sure to provide some relief to the economy, much more is required from policymakers and all stakeholders in the economy, ...
Opinion
11 months ago

HERMAN MASHABA: State is delighting in disregard of certainty about reopening of industries

Why presidential announcements must be a week before the ministers communicate the specifics, I will never understand
Opinion
11 months ago
Next Article