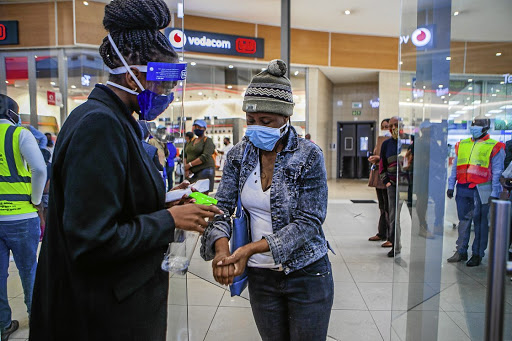 A customer has her hands sanitised in a Johannesburg shopping mall. Picture: Sharon Seretlo/Gallo Images

One small pharmacy in Cape Town will pay R1,059 to the Solidarity Fund for a possible breach of the competition regulations; another settled on R612.

These are hardly the big players the competition authorities usually go after for excessive pricing, nor are the fines large.

But the Competition Commission has been using new Covid-19 rules and existing dominant firm legislation to go after hundreds of cases of alleged price gouging on items such as masks and sanitisers.

And while a couple of big players, such as Dis-Chem, have pushed back, challenging the commission at the Competition Tribunal, smaller ones have settled rather than litigate.

Competition Commission spokesperson Sipho Ngwema said it had received 1,481 complaints of excessive pricing, including against almost all the big retailers, and was investigating. It had another 15 cases to refer to the Competition Tribunal.

Some competition lawyers accuse the commission of going after soft targets and bullying small players to show that it will not allow the Covid-19 crisis to be used as an excuse to exploit the public.

The Competition Tribunal this week consented to settlements in three more excessive-pricing cases involving small players. This included the Cape Town pharmacies, and brought the total the tribunal has adjudicated so far to 15. After public hearings last month, it is expected to decide soon on the case against Dis-Chem, which was prosecuted by the commission for inflating the price of surgical masks in late February and early March.

It is also due to decide soon on the only other case that has been contested so far. It involves Babelegi Workwear, which was prosecuted for excessive pricing of industrial face masks that were suddenly in demand as suppliers ran out of surgical masks early on in the crisis.

The commission said this week it had referred another case to the Competition Tribunal for excessive pricing during the state of national disaster. The case involves price and profit margin increases by industrial chemicals company Caprichem on hand sanitisers.

The commission is pursuing complaints against suppliers and retailers using a section of competition legislation that is concerned with a dominant firm charging an “excessive price” — a clause which previously was used only against giants such as Sasol and ArcelorMittal.

But grafted onto this are the Covid-related regulations prohibiting price gouging on essential goods. The regulations were gazetted by trade & industry minister Ebrahim Patel on March 19 before the lockdown was declared on March 23. They provide for steep fines and even imprisonment.

Small independent pharmacies that increased the prices of masks, which many were selling for the first time because of the demand, dominate the list of the 15 cases that have been settled so far. Some cases also involve smaller suppliers.

The largest settlement was of R11m — a R5.9m penalty plus R5m to the Solidarity Fund. It involved hygiene product supplier Matus. One of the smallest cases involved a pharmacy in Mandini, KwaZulu-Natal, that agreed to donate R300 of essential goods to local child welfare. The donation was the equivalent of what it overcharged for masks.

Competition Commission chief economist James Hodge said the commission was sensitive to smaller players but it was important to signal that businesses should not profiteer and should moderate margins.

The commission's action had been successful, said Hodge. He said it was encouraging to see consumers taking action to complain about excessive price hikes.

“Anyone can profiteer, and it is important, especially at a time when consumers' movements and shopping patterns are restricted, to prevent them being exploited. It's important to see this is enforced in all locations, especially in a lockdown situation where people are looking to local stores to get provisions and don't want to shop around and expose themselves to risk,” Hodge said.

Though most cases had been about masks and sanitisers, there was an increasing number of complaints from poorer communities about staple foods prices.

Lawyers for Dis-Chem argued last month that Patel's new Covid-19 regulations — which refer to “material price increases” that exceed the cost of providing the goods — are too vague, and can't apply to price increases before March 19. They said the commission had done only minimal investigation. They said price increases on masks were a case of markets working, rather than of competition being at risk.

Dis-Chem increased prices in late February and early March after it sold all its masks to mainly bulk buyers. The chain struggled to restock amid global supply chain disruptions caused by the crisis, the lawyers said.

But it cut prices again later in March when it found new sources of supply — at a time when the market was responding strongly to the shortage with an increase in production of surgical masks and substitutes such as cloth masks.

The commission said the crisis had conferred temporary market power on Dis-Chem and it had used the opportunity to exploit consumers, charging an excessive price in the midst of a pandemic.

It said that Dis-Chem had increased the price of a box of 50 masks from R41.70 in December to R173.87 in mid-March, though this had since been reduced.

Meanwhile, it is not clear why SA's consumer authorities have been slow to take up Covid-related cases, many of which arguably are more about consumer protection than about competition.

The National Consumer Commission said on April 17 that it had filed a matter to the
National Consumer Tribunal for prosecution involving a supplier of sanitiser, saying it had been inundated with complaints from consumers.

This week the Competition Commission said it had referred four suppliers to the National Consumer Tribunal for prosecution, relating to high markups on masks, gloves and sanitisers. However, the consumer tribunal's website shows its most recent judgment was in mid-March.

The consumer commission did not respond to questions on the outcome of the cases and about how many complaints it had received.

Covid overpricing: Watchdog takes a sledgehammer to a fly

As firms fail, focus will be on competition authorities’ handling of mergers

ISMAIL LAGARDIEN: Fracture in the world could let the light in — but I’m not ...

Covid overpricing: Watchdog takes a sledgehammer to a fly

As firms fail, focus will be on competition authorities’ handling of mergers

ISMAIL LAGARDIEN: Fracture in the world could let the light in — but I’m not ...