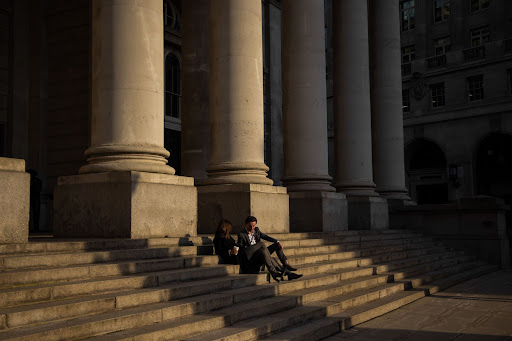 The need for people to gather in the same place to swap information and securities is fast disappearing. Picture: BLOOMBERG

Stand on the steps of the Royal Exchange in the heart of the City of London and you can picture the churn of people 200 years ago or more in what was becoming the world’s pre-eminent financial hub. Stock jobbers, traders and financiers would stream between its great limestone columns with the Bank of England to one side and all surrounded by offices of bankers or trading houses and alleyways to the ever-busy coffee shops.

The exchange was where transactions happened, but the coffee shops played an equally important role in the lifeblood of markets as information centres. People hung out there for refreshment and gossip but also all the details of supply and demand. “[T]he coffee men vied with each other in maintaining the supply of a wide variety of domestic and foreign newspapers, news-sheets, journals and bulletins, customs entry forms, auction notices, price-current lists, etc,” according to David Kynaston’s City of London: The History.

Today, London’s future as a global financial hub is under threat. In the popular discourse, that’s largely due to Britain’s exit from the EU and the ongoing fights over trade and regulations. But Brexit is barely half the story, and New York faces similar threats. While JPMorgan Chase is expanding its Paris office with new trading floors, Goldman Sachs Group is doing the same in Miami and has been hunting for space in Dallas.

What links these moves is the ways technology and regulations have dramatically changed the flow of information in just the past couple of decades. The Covid-19 pandemic showed just how little physical location now matters for many jobs and businesses in finance and gave executives confidence that more operations could be managed remotely.

Until relatively recently, human voices were still the main vehicle for transactions on trading floors, and the chatter was full of market information. Traders listened in on conversations and talked to each other and clients to absorb market colour: that sense of whether investors were confident or fearful, who owned what and who was interested in selling or buying. Outside the office, deals, tips and preferential treatment could be won in restaurants and bars in a way that is now far harder to implement.

The information in all these conversations has become ever more tightly regulated or automated in the 21st century, especially since the financial crisis of 2008. Scandals such as insider dealing around takeovers, foreign-exchange trading and the manipulation of the interbank lending rate known as Libor have revolutionised trading and communication in banks.

Telephone calls, instant messages and emails are all recorded for posterity. Personal communications are ever more tightly controlled: Credit Suisse Group is seeking access to employees’ personal devices, while JPMorgan was just fined $200m for not recording everyone’s WhatsApp messages. Compliance is paramount as a deterrent and as a record of how and why everything was done.

But it’s not just about scandals — it’s also the rules designed to ensure investors get good prices and the regulations to make marketwide risk monitoring easier. The effect has been to push more trading to electronic platforms even in the least liquid securities such as corporate junk bonds.

That electronification has allowed banks to manage their own balance sheets more efficiently. Most big investment banks have been building central risk functions with algorithms and data systems that generate quick tallies of their inventories of stocks or bonds, what they can source from their clients at any given moment and what clients are interested in buying: in other words, a smarter version of the old market colour of a noisy trading floor.

Speed and risk mitigation are everything for banks in the post-2008 world of high transparency and low returns. Investment banks are becoming more machine-like and much less dependent on human capital, as Kian Abouhossein, an analyst at JPMorgan, put it earlier this year.

Similarly, Mike Mayo, an analyst at Wells Fargo, has predicted that US banks could shed 100,000 to 200,000 jobs over the next decade as digital technology helps make efficiency, speed and ease of use the main sources of competitive advantage.

The most complex transactions, like buying and selling whole businesses, will probably always need face-to-face negotiation, but the Covid-19 pandemic showed how much could be done by video.

Banks like JPMorgan and Goldman still want staff back in the office, but that office doesn’t need to be in New York or London for everyone to know what’s going on. I suspect the desire to get people back is more about motivation, oversight and control.

For team leaders, there are also human insights that can be gained only in the office. One head of credit trading I spoke to over the summer said the crucial thing they found hard to judge over Zoom calls was traders’ emotional states — whether they were overconfident or fearful.

But a team and its leader could just as easily be in Dublin or Frankfurt, Palm Beach or Austin, as New York and London. European cities have some regulatory pull since Brexit, but that’s not their only attractions. Milan has great tax incentives as do Florida and Texas.

There might be lifestyle benefits, too: cheaper housing, more accessible countryside, better schools maybe. And such comforts seem more important to a generation of younger finance workers, whose jobs often involve less risk taking and entrepreneurialism than in the past. They are compliance heavy and less exciting.

The money is still good, but working in technology might be more interesting, private equity might be higher paid and side hustles might even be viable as main careers. Goldman CEO David Solomon warned in November that New York needs to work hard to keep itself attractive. Like banks themselves, the great financial hubs face more competition for workers.

The main reason for major city hubs to endure might actually be for the benefit of workers: it is easier to switch jobs when competing offices and the individuals that might hire you are nearby (though this process is now being automated, too). The advantage for a large bank of having a campus where no other banks are based is that staff can’t jump ship without also having to move home.

Human networks and relationships are important for the dissemination of know how and skills. But just because people of Generation X and older have always done this face to face says nothing about whether Gen Z will care to or need to.

The courtyard and walkways of the Royal Exchange were long ago converted into shops and restaurants. Around the world, open outcry trading pits and stock exchanges are mostly museum pieces. Now banks themselves have begun to split operations into smaller pods spread across countries and continents.

Location just doesn’t matter for transactions or information flows like it once did. Financial hubs are in the minds and smartphones and terminals of the participants. This is the real challenge for London and New York.

• Paul J Davies is a Bloomberg Opinion columnist covering banking and finance. He previously worked for the Wall Street Journal and the Financial Times

Governments in many countries are scaling back festivities in an effort to contain rampant contagion as global coronavirus infections hit a record ...
World
5 months ago

Destinations where travel recovered fastest (and slowest) in 2021

Florida Keys best of the bunch in US, while Amsterdam put in a poor showing for Europe
News
6 months ago

A modest cutting back on socialising would be good for retail. If Brits choose to stay home rather than eat out that means more pigs-in-blankets and ...
Opinion
6 months ago
Next Article

The JSE is still innovating 134 years on

The JSE is still innovating 134 years on