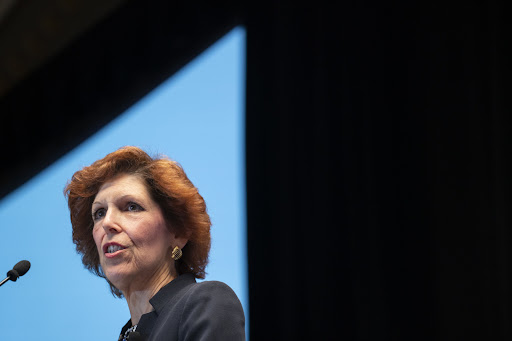 Ever since traders erroneously interpreted Federal Reserve chair Jerome Powell’s July media conference as dovish, US short-term bond yields have completed a round trip, with the market now essentially back to where it started a week ago. That gets bonds closer to realistic pricing in the face of the worst inflation in 40 years, but much more upheaval could be in store.

Consider the developments of the past day. The yield on two-year treasuries surged 20 basis points on Tuesday, the most since June 10, as a succession of Fed speakers helped the market realise it had become overly optimistic about the prospects of a shift in monetary policy. Most notably, San Francisco Fed president Mary Daly said the Fed was “nowhere near” wrapping up the war on inflation, while Cleveland Fed president Loretta Mester said: “We need to see really compelling evidence that inflation is moving down,” adding that “my view is that we haven’t seen that yet.”

Of course, the Fed pushback and market reaction were somewhat predictable after the exuberance of the previous month, including a 12.6% surge in the Nasdaq 100 Index, the biggest since April 2020. Yet a lot of the rosy positioning is still broadly intact even after Tuesday, with Fed funds futures implying that the central bank will push rates to just about 3.5% by December and then start cutting rates by the second half of 2023.

In a sense, traders emerged from the Fed’s last policy decision — and its 75-basis-point rate increase — thinking a Fed pivot was coming as soon as September. They’re still banking on a pivot, just perhaps not quite so soon.

How realistic is that? For their part, traders think the Fed could be forced to back off its rate increases because of a slowing economy and falling commodities prices that feed into inflation. But inflation is more than just commodities prices, and core measures of both the consumer price index and personal consumption expenditures measures show that month-on-month inflation is accelerating.

Mester — like several of her peers — made clear on Tuesday that she wants to see evidence that those month-on-month changes in inflation are moving down before she changes her posture. The declines in raw material prices are indeed positive news, but services prices are rising faster and could prove more daunting to temper. Meanwhile, economists worry that the pace of wage increases is consistent with inflation that’s well above the Fed’s objective.

It’s hard to imagine a scenario in which the central bank is anywhere near declaring mission accomplished on inflation. Yet at this point, there isn’t much more the Fed can say to convince market participants of its determination. Everything Powell says mysteriously gets twisted into a dovish narrative, leaving his peers to go out and clean up the record — albeit with only partial success. Instead, the data itself will have to lay the groundwork for higher interest rates.

The Fed gets two employment reports and two consumer price index (CPI) prints before it meets again in September. The month-on-month change in core prices is expected to moderate somewhat in the first such CPI report next week, but if it surprises again meaningfully to the upside, the bond rout that will ensue will make the past day look tame by comparison.

Bloomberg
For more stories like this go to bloomberg.com/opinion

As pressure in credit piles up, some investors are looking to trim exposure to lower-rated credits and buy bonds of companies likely to be more ...
World
1 month ago

While the Fed and BoE are well under way with policy tightening, the ECB hasn’t raised borrowing costs since 2011
News
3 months ago
Next Article

Eurozone inflation surges to a record 5.1%

Eurozone inflation surges to a record 5.1%