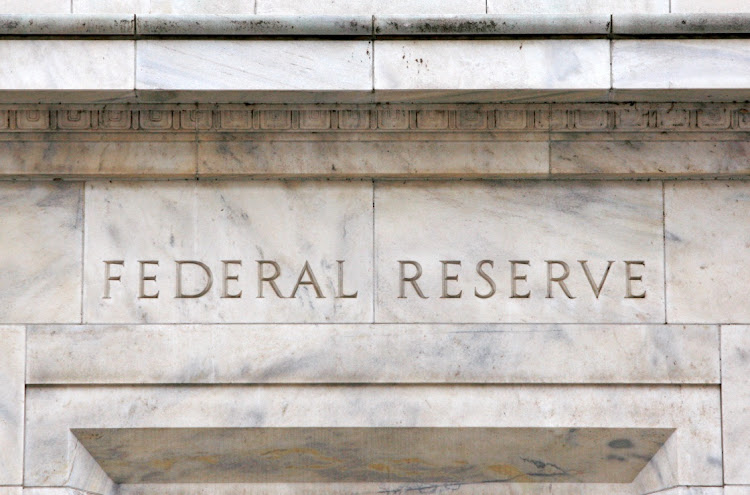 The US Federal Reserve Building is pictured in Washington on March 18 2008. File Picture: REUTERS/Jason Reed

The Federal Reserve is taking a lot of heat over its handling of the highest US inflation in four decades. Critics say the central bank, which is expected to raise interest rates 75 basis points at its meeting on Wednesday, was too slow to recognise the problem and is still not doing enough to fight it. A close look at the record argues against that assessment.

The following table lays out the record going back to the beginning of 2020. It shows year-on-year growth for the consumer price index (CPI), the best-known measure of inflation, alongside that of the personal consumption expenditures price index excluding food and energy, the Fed’s preferred inflation tracker. It also shows the five-year breakeven inflation rate, a widely used gauge of expected inflation over the next five years derived from the difference between the yield on plain-vanilla and inflation-protected five-year treasuries. And, finally, it shows the federal funds rate, the Fed’s primary tool for fighting inflation, and the yield on two-year treasuries. 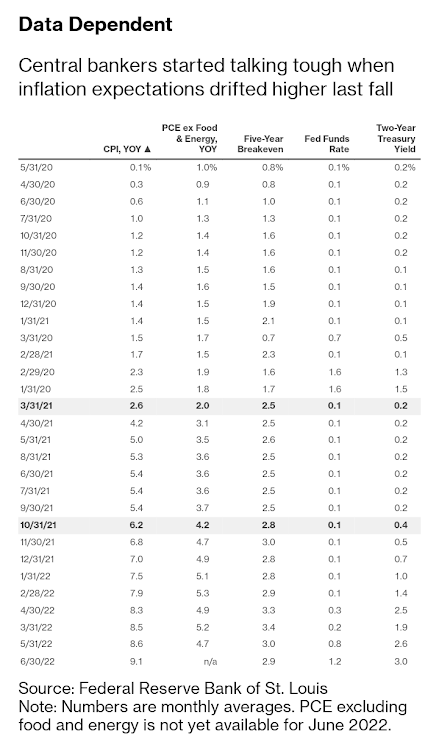 First, and least controversially, I hope, it should be acknowledged that the Fed was right to intervene when Covid-19 shut down the US economy in the spring of 2020. Year-on-year CPI hurtled towards zero and nearly tipped into deflation. The Fed rescue — aided by muscular fiscal stimulus — ­stabilised inflation, the economy and markets.

Despite record amounts of stimulus, the Fed struggled to raise inflation to its 2% target over the next year. That changed abruptly in March 2021 when CPI rose 2.6% over the prior year and personal consumption expenditures (PCE) grew 2%. While I imagine the Fed was relieved to see inflation returning to more normal levels, it would have been hasty to declare victory based on a single month of data, so it made sense to wait to see whether March was an outlier or the start of a larger trend.

As it turned out, prices continued to rise through the spring of 2021, though it was not clear yet that higher inflation would linger. Historically, there have been many bursts of elevated inflation that lasted a few months and then receded. In addition, higher inflation readings were expected through the spring and early summer of 2021 because prices had been beaten down the previous year. Supply shortages and wild swings in consumer spending — not to mention that no-one had ever attempted to shut down and restart the economy — also made it difficult to tell whether higher inflation had truly taken root. The market clearly didn’t think so because the five-year breakeven rate was moored at about 2.5% from March to September 2021, modestly above the Fed’s target.

In October, inflation entered a new phase. Year-on-year CPI began climbing to more worrisome levels, and inflation expectations edged higher. Critics contend that the Fed sat on its hands at the time, but that’s a misreading of the record. While it’s true that the Fed waited several more months to raise the federal funds rate, it didn’t need to raise rates to have an immediate effect.

The federal funds rate is an overnight lending rate between banks, but its power resides in its ability to move short-term interest rates, which influence the entire economy. Central bankers began signalling their intention to fight inflation in the autumn of 2021, causing short-term interest rates to move higher in anticipation. The two-year treasury yield began to rise meaningfully in October 2021 for the first time in many years and has risen every month since. Eventually, the Fed had to raise the federal funds rate to maintain its credibility, which it began to do in March. Markets evidently find the Fed credible because the yield on two-year treasuries is up to 3% from just 0.4% in October 2021.

It’s too soon to gauge the effect of the Fed’s efforts so far, though there are signs that inflation may be easing. My colleagues Tracy Alloway and Joe Weisenthal listed a variety of prices that have declined, including industrial metals, shipping rates, used cars and lumber. Year-on-year PCE peaked in February and has declined every month since. The market is also signalling that inflation has topped. The five-year breakeven rate is back down to 2.6% from a peak of 3.6% in March.

Even so, critics contend the Fed should be more aggressive, but its measured approach now seems prudent. Real GDP contracted 1.6% in the first quarter, and the Atlanta Fed estimates another contraction of 1.6% in the second, so the US may already be in a recession. The fact that it doesn’t feel that way to a lot of people is testament to the balancing act the Fed has pulled off so far. If the Fed manages to bring down inflation with only a mild recession — a so-called soft landing — it will be a significant coup. More draconian measures may yet be necessary, but given the damage they would do to the economy, it’s sensible to see if a lighter touch is enough.

I suspect some of the criticism also stems from disapproval of previous Fed interventions, some of which I share. I would not have lowered interest rates as much as the central bank did in response to the dot-com bust in the early 2000s. I also understand the anger many feel about having to rescue Wall Street banks in 2008 after they nearly brought down the financial system. Those were different Feds, though, and it wouldn’t be fair to tar this Fed with that history.

Nor is it fair to expect the Fed to have seen this bout of inflation coming. No-one can reliably predict inflation; if that were possible, inflation wouldn’t be a problem because central bankers would always pre-empt it. There were numerous predictions after the financial crisis that the trillions of dollars marshalled to revive the financial system would spark runaway inflation, but inflation never came.

The reality is that a data-driven approach to monetary policy, which the Fed is right to pursue, will always be a step slow because economic numbers come with a lag. But looking back at the data available to the Fed and the decisions it undertook in response, it appears to have done as well as anyone can reasonably expect.

Boost women in the workplace to boost economies, says Yellen

Boost women in the workplace to boost economies, says Yellen