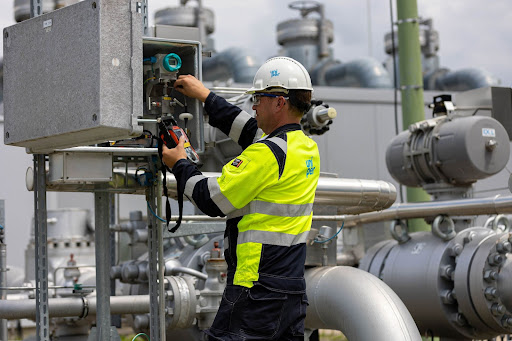 An employee monitors for gas leaks during safety checks at the Uniper Bierwang Natural Gas Storage Facility in Muhldorf, Germany, in this photo taken on June 10 2022. Picture: BLOOMBERG

It’s a falling chain of energy dominoes — one in which each tile is worth many billions of euros. A failed utility here, a nation’s supply there. When the dust settles, the total bill for rescuing the European energy market this northern hemisphere winter will easily top $200bn.

This may sound flippant, and it’s admittedly a rough estimate. But the calculus is conservative and based on what we know today. It doesn’t cover the worst-case scenario of both Russia fully shutting down natural gas supply to Europe and a colder-than-average winter.

Very few politicians seem to grasp with the magnitude of the coming crisis and its costs, with Emmanuel Macron of France and Olaf Scholz of Germany being among the only ones that appear to get it now. (The rest, in many cases, remain distracted by domestic politics.) The EU has called for an emergency meeting of energy ministers later in July. But this should precede a larger heads-of-government summit focused on energy before the summer break.

The EU will have to decide on a big energy savings programme, including a public campaign to support it, and make clear that nations will help each other by sharing the little gas that will be available. This means inviting the UK, Switzerland and Norway to the table in Brussels too.

As forward natural gas and electricity prices continue to climb, more European utilities and energy retailers will struggle. Consider Germany, where the one-year forward electricity contract surged last week to a record high of more than €350 per megawatt hour, up 750% from an average of €41 between 2010 and 2020. Natural gas prices for 2023 in Europe have surged recently, too.

The only chance of survival for the utilities is to pass the huge jump in wholesale prices onto their customers. But that only moves the bailout down the chain, as households and businesses would then face unaffordable bills and need government help.

Ultimately, taxpayers will bear the cost — either directly and immediately, via higher retail power and gas prices, or later, and over the years, via higher taxes to pay for the bailouts. European governments should be upfront about the costs: they can win the argument that this is money well spent to stop Vladimir Putin.

Let’s start from the utility side. Germany’s Uniper, the biggest buyer of Russian gas, has all but failed. It recently asked for a government bailout, and preliminary estimates put the bill at €10bn. That’s likely to prove conservative. Electricite de France SA has failed as a reliable producer of electricity and needs help. Paris, which already owns a majority stake, will renationalise the rest, at a cost of at least €8bn.

And Uniper and EDF are just the tip of the iceberg — two utilities among the dozens that serve more than 200-million households in the EU and UK. The majority perhaps will weather the storm. But many others are going to need help. At the very least, they will require state-backed loans and other government guarantees to buy super-expensive gas in the spot market to replace the loss of Russian gas. At worst, they will need to be nationalised, if only temporarily.

The state-backed loans aren’t trivial. Earlier in July, the Czech government gave the country’s state-controlled utility CEZ an emergency loan of €3bn. That’s for a company that serves a country of little more than 10-million people. The German government, via its state-owned bank KwF, has already given €15bn in loans to the country’s gas-market operator to buy gas and fill up storage ahead of winter. Whether those loans will ever be repaid is a question mark.

Now let’s look at the households. The UK is paradigmatic of the problem. In February, London announced a multi-billion-pound bailout to cushion the effects of a 54% increase in the country’s retail energy cap — a limit on how much utilities can charge families per year for electricity and gas. Back then, the price cap was rising from £1,277 to £1,971 per year, effective April 1. From October, the price cap is set to jump to about £3,300 per year. The near 70% increase is set to be announced in early August.

Yet the median pretax annual household income in the UK is £31,770. That means a typical household will spend more than 10% of its income paying for electricity and gas — that’s the standard definition of energy poverty. Without government money, families will default on their bills, creating a debt problem for their energy providers. Either London bails out the families, or it has to bail out the utilities.

The likely size of the British government’s help? Earlier in 2022, a £693 increase in the price cap triggered a £9.1bn handout. Back-of-the-envelop math suggests the £1,300 or so increase that’s coming would trigger a £17bn bailout.

Factor in just these known examples, and a $200bn bill in European bailouts, nationalisations, state-backed loans and the like doesn’t sound that flippant anymore.

And the problem can get a lot worse very quickly. Again, consider Uniper. Because Russian President Vladimir Putin has cut gas supply to Germany by about 60%, Uniper is losing about €30m every day from having to buy the same gas in the spot market. That’s about €10bn per year — roughly the cost of what the German government is currently planning to spend to keep it afloat. If Putin completely shuts down the flow, the utility’s daily losses will jump to about €100m a day, or more than €35bn per year. The government will have to provide that sum if it wants to keep people’s power on.

If the utilities are allowed to pass higher gas costs onto the consumers, Goldman Sachs believes that European households will have to pay €470 per month for electricity and gas, up 290% from the typical cost in mid-2020. That’s clearly unaffordable to many, perhaps most, and a much bigger bailout will be needed to help consumers get by.

Next winter will be expensive. The only question now is just how much it’ll be.

We need to remove the obstacles so there can be more players in the energy sector, local and  international, who will be willing to invest if the ...
Business
1 month ago

In addition to providing generators and solar energy, some landlords will be wheeling electricity from solar panels in their portfolios
Companies
1 month ago