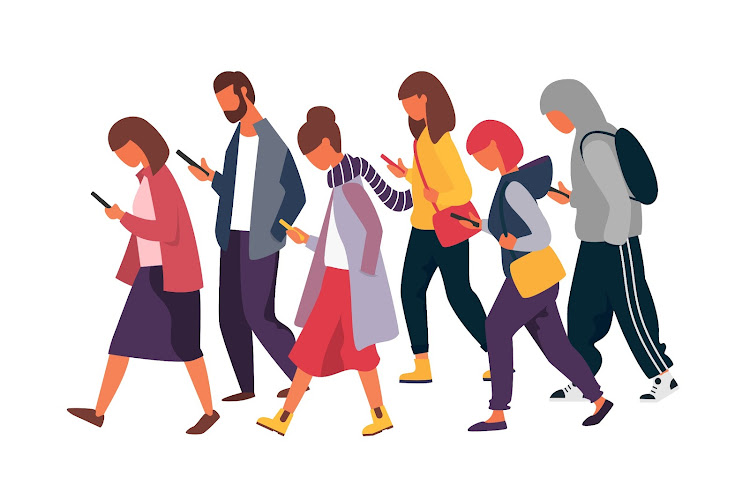 Earlier this week my iPhone got a drastic makeover. It went grey.

Instead of the bright colours that popped from the screen, my apps and photos stared out like washed-out newspaper print. This was intentional on my part. I wanted to see if setting my phone to grayscale would make me spend less time scrolling through apps.

One surprising result near the beginning of my experiment: the real world around me looked more vivid when I looked away from my phone.

Grayscale mode has been reported about in the tech press for countering phone addiction, but I first heard of it last week during a Twitter Spaces discussion with Emma Lembke, a 19-year-old college student who started the LOG OFF movement to help young people create a healthier relationship with social media.

Emma, whose addiction to Instagram from the age of 12 took a toll on her mental health, told me she set her phone to grayscale mode whenever she had exams or was in a stressful period of life. An edited transcript of our conversation is at the end of this column.

Steve Jobs, who relentlessly pursued aesthetic perfection in Apple phones, would probably be turning in his grave at the idea of draining our pocket computers of all their carefully-chosen hues. But turning your phone grey is not easy. There was a labyrinthine series of settings I had to navigate first.

(To go grayscale on iOS, open Settings, tap Accessibility, then tap on Display & Text Size and finally scroll down to a feature called “Colour Filters.”)

None of this comes up when you run a search for “grayscale”, “black and white” or “colour” in the iPhone’s Settings app.  You have to search for the steps on Google.

It won’t surprise anyone that tech firms are not singing from the rooftops about how to spend less time on their products.

Of course, it won’t surprise anyone that tech firms are not singing from the rooftops about how to spend less time on their products. But it also wouldn’t kill them to make it easier for people to moderate time spent mindlessly scrolling.

Other products with addictive qualities have some friction pushed onto them by regulators: cigarette packets have graphic warning labels while advertisements for alcohol remind consumers to “drink responsibly”. There’s no similar requirement for Big Tech firms, despite widespread evidence that excessive phone and social media use leads to mental health problems. At minimum, they should spotlight tools enabling people to use them less compulsively.

But they also have not made it easy for those building tools to control phone addiction. Last October, Meta Platforms sent a cease-and-desist letter to a British software developer who had created a free browser tool that automated the process of unfollowing an entire roster of Facebook friends, making a person’s newsfeed virtually empty, while still retaining those friends.

Louis Barclay released the tool in July 2020 after he tried manually unfollowing all his Facebook friends — a process which can take several hours — and found he was no longer tempted to scroll down an endless feed of content. The hours he spent on Facebook dropped, he told me in an interview, as his addiction became manageable.

About 12,500 people downloaded Barclay’s tool, Unfollow Everything, but a year later, in July 2021, Facebook demanded he remove it. It also banned him from using Facebook or Instagram for life, saying the tool compromised user safety and privacy.

A Facebook spokesperson said it was wrong to suggest the company was motivated to reduce people’s control over their use of the site, and said it provided an activity dashboard and daily reminders to limit notifications, having collaborated with mental health experts.

The growth of services that prize connection over obsession marks a healthy shift in social media.
Opinion
2 months ago

I’ve used another one of Barclay’s other tools, called Nudge, with Twitter. It flashes a reminder once you’ve scrolled down more than 10 posts at a time as a gentle reminder that constant scrolling doesn’t necessarily lead to more useful information.

There’s a whole cottage industry of widgets like this. Apps like News Feed Eradicator are aimed at reducing distractions, Flipd is for staying focused on goals and Freedom helps block distractions across devices. Some are apps, but many are also browser extensions, which Barclay says can be easier to distribute since apps must play by the rules of App Stores. Unfortunately, none of these services are cracking the top 10 lists of app stores.

That’s why Big Tech platforms should make tools for taking control of their digital diet part of their own products. Apple, to its credit, has made some steps in that direction, in recent years adding screen time updates, a “Night Shift” mode to reduce blue light and “Do Not Disturb” and “Personal” buttons that make it easy to stop most notifications.

But Apple and Facebook could also do more. Apple could make it easier to find and switch the iPhone to “grayscale” mode with just a single button in its drop-down menu. Apple declined to comment. Facebook could make it easier to unfollow lots of friends at once, to give users more control over what they see in their newsfeed. Barclay believes Facebook users should have an option to opt out of the Newsfeed entirely. That would hurt its business model, he acknowledges, “but we should have that choice.”

Below is an edited transcript of my Twitter Spaces discussion with Emma Lembke, the 19-year-old founder of LOG OFF, a loose-knit collective of young people encouraging others to spend less time on social media.

Olson: Your LOG OFF movement isn’t suggesting that teenagers get off social media entirely, so what should they do instead?

Lembke: What we are promoting is getting to a point where you can build healthier habits around social media.

Olson: So what’s your advice for people who want to do that?

Lembke: A lot of people I’ve spoken to don’t need to necessarily delete all of their apps. They can just put on grayscale or look for [browser] extensions. I looked for apps that would balance my screen time usage and allow me to express myself, continue to figure out who I am while remaining in safer digital spaces ... I downloaded Stanford’s Screentime Genie, an app called Blue Fever and an extension called Opal which is a screen time productivity tracker.

Olson: Tell me about grayscale and how you used it.

Lembke: It’s the technique I get the most comments about. You would think to yourself that turning your phone black and white is not going to do much. But I always turn to grayscale when I’m in exam season or when I’m in a period of stress. The amount of time that I spend on my phone and on social media decreases by well over a half. I am spending 30 minutes tops on my phone all day, maybe even 20 minutes.

Lembke: In my senior year in high school, multiple friends came up to me, making fun of me saying “what is that? Why is your phone in black and white?” Both people that made those comments texted me later saying “hey, can you send me details on how to do that? It actually seems to really work”.

Olson: Have you had any feedback from tech companies about what you’re doing?

Lembke: I have not. I eagerly await for the day when I have an email from anyone on those teams.

Social media makes us feel terrible about who we really are. Neuroscience explains why — and empowers us to fight back
Life
1 year ago