ADRIAN WOOLDRIDGE: Boris Johnson was on the lightweight end of destructive global populism

But structural forces remain on the side of norm-breaking politicians, who will continue to wreak global havoc 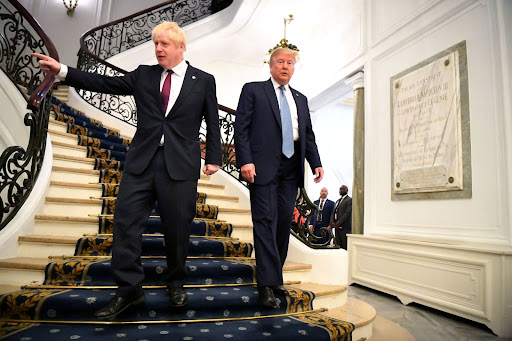 The defenestration of Prime Minister Boris Johnson was a very British affair. There were prolonged shots of Number 10 Downing Street as the press waited for signs that he might surrender. There was a particularly fraught Prime Minister’s Question time as Johnson tried to defend his record against Labour’s Keir Starmer even as his MPs were deserting him. There were repeated references to the 1922 Committee — the Conservative backbenchers’ trade union that had its origins in a backbenchers’ plot, in 1922, to terminate the party’s alliance with another louche politician, Lloyd George. To add a very British twist to the tale: the 1922 Committee sprang from a meeting in the Carlton Club where Chris Pincher allegedly engaged in the drinking-and-male-groping frenzy that ended Johnson’s career.

Yet for all the local colour, this was a British variation on the global story of populism’s dangerous appeal and destructive power. We have seen similar themes play out in almost every corner of the world. A charismatic leader wins power by promising to champion the people against the powerful. He breaks many of the formal rules of politics, starting with sartorial and behavioural codes but also targeting institutional rules, particularly when they involve putting constraints on his power. He frequently achieves remarkable things that convention-bound politicians deemed impossible. But he eventually crashes and burns — the victim not only of personal foibles but also of the logical contradictions inherent in his promises.

Johnson was on the lightweight end of global populism. His attempt to hole up in Nr 10 even as his government collapsed was as nothing compared with Donald Trump’s support for the assault on the Capitol on January 6. Johnson’s most spiteful act was to sack Michael Gove, the secretary of state for Levelling Up, for having the gall to tell him to his face to resign; Trump reportedly cheered on calls for his vice-president, Mike Pence, to be hanged!

Bolivia’s Evo Morales tried every means imaginable to extend his time in power from referendums to court actions. Silvio Berlusconi controlled Italy’s three top television channels which provided slavishly favourable coverage of his political career. The Philippines’ Rodrigo Duterte called for the use of “death squads” against drug gangs. Hungary’s Viktor Orban boasts about creating an “illiberal democracy”. Johnson is a piker by comparison with some of these figures.

Yet he nevertheless did serious damage to his country, damage that is even more striking considering that Britain is one of the world’s oldest and most stable democracies. He transformed the Conservative Party from a broad church into an ideological clique, expelling 21 Remainers, including Winston Churchill’s grandson, Nicholas Soames, and giving jobs exclusively to Brexiteers, regardless of their abilities or public personas. He tried to remove constitutional constraints on the power of the executive by proroguing parliament and denouncing both the Supreme Court and the House of Lords as constraints on the “will of the people”. Though Johnson’s days are numbered, his government threatens to break international law by unilaterally withdrawing from the Northern Ireland protocol.

In the US, Trumpian populism has eaten the Republican Party from within, just as some wasps will eat their host arachnids from the inside

Destruction is part of populism’s DNA, even in its most moderate form. Populism inevitably involves norm-breaking: rule one of the populist playbook is that you demonise conventional politicians — those identikit suits and meaningless sound bites! — and offer something more “authentic”. Equally inevitably, populism involves disintermediation — populist leaders appeal over the heads of established institutions, particularly political parties, to the people.

Johnson had a rocky career as a party man: Michael Howard, the Conservative leader from 2003 to 2005, sacked him for lying over an affair, and Theresa May was repeatedly on the verge of sacking him as foreign secretary for incompetence and insubordination. Instead, he succeeded by turning himself into a brand — cultivating his messy hair and bumbling mannerisms, appearing on the satirical TV show Have I Got News for You, revelling in his scandalous private life and selling himself first as a liberal mayor of London and then as a nationalist Brexiteer. One reason he was so reluctant to bow to pressure from the party to resign is that he didn’t owe his career to his party but instead to his own mastery of branding.

The combination of norm-breaking and disintermediation can work wonders for a while: Trump defied expectations by beating the Clinton machine in 2016 just as Johnson led a previously listless Conservative Party to an 80-seat majority in 2019. But they eventually exact revenge in the form of chaos and disappointment.

Populists tend to surround themselves with friends and hangers-on rather than party functionaries: Downing Street insiders have repeatedly compared the prime minister’s office to a court, in which petitioners beg the king to look favourably on their pleas, and, if they can’t get the king’s attention, lobby the queen, Carrie Johnson, who has variously been dubbed Carrie Antoinette and “Princess Nut Nut”.

Populists also make contradictory and uncosted promises that are eventually exposed as guff. Dominic Cummings, Johnson’s right-hand man when he first arrived in Downing Street who stormed out in spectacular circumstances, likens his former boss to a shopping trolley (complete with emoji) that careers all over the place. Johnson didn’t know whether he was a Thatcherite Tory, trying to cut the state, or a big government liberal, trying to provide the just-about-managing with security; in the end, he tried to do both, promising to build 40 new hospitals while also cutting taxes. The hospitals haven’t materialised and the tax-cutting refrain eventually drove his chancellor, Rishi Sunak, to resign, precipitating the final few days of chaos.

When it comes to institutional damage, the prize must go to Trump given that he wreaked his havoc in the world’s oldest liberal democracy, rather than, like Orban or Turkey’s Recep Tayyip Erdogan, in countries with chequered pasts. In Britain, the Conservative Party eventually rejected Johnson and his soft populism. In the US, Trumpian populism has eaten the Republican Party from within, just as some wasps will eat their host arachnids from the inside.

When it comes to economic damage, however, the prize arguably goes to Johnson. Trump’s signature economic policy — treating China as a strategic threat rather than a business opportunity — was essentially right, while his enthusiasm for rolling back regulation generated business support. Brexit by contrast seems to be an unmitigated disaster that even a growing number of Brexiteers are repudiating, either on the grounds that it was a mistake or, the cry of the fanatic down the ages, that it wasn’t properly implemented.

Johnson was right to claim in his resignation speech that Brexit will be his defining legacy. Brexit almost certainly wouldn’t have happened if he hadn’t supported it: without his youthful charisma and reputation as a cosmopolitan liberal, it would have remained a quixotic passion of elderly Conservative MPs such as William Cash and barroom xenophobes such as Nigel Farage. Nor would it have happened in its current hardline form if he hadn’t seized control of the Conservative Party from Theresa May by offering a “real Brexit” regardless of little details such as the Northern Ireland protocol and access to the single market.

But the economic costs of Brexit are mounting. When the government tried to celebrate the sixth anniversary of Brexit on June 23, it found itself with nothing to say — Johnson pointed to the “Brexit triumph” of the freedom to put a crown stamp on pint glasses (something the EU had actually never forbidden) and Jacob Rees-Mogg, the minister of state for Brexit opportunities, was reduced to mouthing vapidities.

Given his literary skills and extraordinary life, his memoirs are likely to be a page-turner, the very opposite of David Cameron’s soporific ‘For the Record’

Though disentangling the effects of Covid-19 from the effects of Brexit is difficult, the Office of Budget Responsibility’s current estimate is that Brexit has, so far, reduced UK GDP by about 1.5% with a further reduction of 2.5% still to come. This would, in turn, translate to about £12bn less a year in tax revenues, rising to well over £30bn. The Centre for European Reform estimates that the UK has seen a growth shortfall relative to economically comparable countries of more than 5% since Brexit. That’s a lot of economic damage for one man to have on his conscience.

Could Johnson’s defenestration mark the end of the populist era? Johnson has complained bitterly in private that the premiership has impoverished him, given the number of children he has to support and his wife’s expensive taste in interior design. He will now busy himself making money giving speeches (at which he can excel) and writing books (he was reportedly writing a book on Shakespeare when he became PM). Given his literary skills and extraordinary life, his memoirs are likely to be a page-turner, the very opposite of David Cameron’s soporific For the Record.

Trump’s chances of making a comeback look slimmer by the day as the House of Representatives’ select committee to investigate the January 6 attack on the US Capitol produces yet more toe-curling revelations. The flames of populism are burning a bit less brightly in the emerging world at the moment.

Yet this is more likely to be a pause for populism to regain its breath rather than a full stop. Even assuming that inflation can be quickly brought under control and a recession averted — heroically optimistic assumptions both — structural forces are on the side of populist politicians. The new media landscape makes it easier for entrepreneurial leaders to get their message across. At the same time, the combination of the outrage-industrial complex (Fox News and its lookalikes) and social media stokes popular anger. The modern economy seems to specialise in producing what might be called disruptive stagnation: disorientating changes in technology combined with stagnant living standards for large groups of people. It’s as if people are being forced to move house repeatedly not for a bigger house or a shorter commute but just for the sake of moving — a recipe for mounting discontent whose expression technological innovation makes ever easier.

Culture continues to be dominated by preening elites who think they are not only more clever than the average person but also, thanks to their commitment to diversity and equity, more virtuous. The corporate elite has doubled down on its obsession with cosmopolitan values despite evidence that many regular people find this irritating and alienating. And the ancient gods of belonging continue to beckon, perhaps even more so as technology and globalisation break down traditional communities and promote anomie.

Johnson may be retreating to his former career as a writer and entertainer. Trump may be forced into angry retirement. But populism is here to stay — a vital force that, by combining the power of new technology with ancient tribalism, can destroy institutions, convulse economies, overturn corporate plans and generally plunge the world back into chaos. The wrecking ball still has a great deal of wrecking to do.

Bloomberg Opinion
More stories like this are available on bloomberg.com/opinion

Labour Party leader says he will try to bring about a national election using a vote of confidence in Boris Johnson next week unless Conservative ...
World
1 month ago
Next Article