Boris Johnson is risking his reputation and, more importantly the UK economy, by seeking to reform the Northern Ireland Protocol 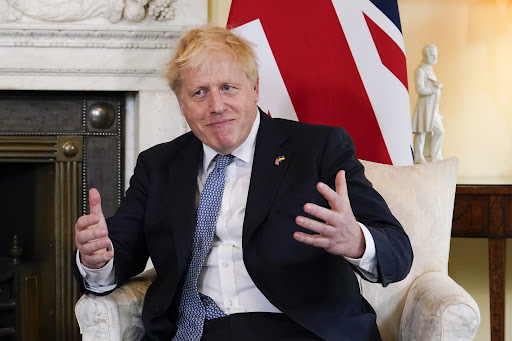 A bill introduced to the UK parliament on Monday by foreign secretary Liz Truss seeks to reform the Northern Ireland Protocol, revive Northern Ireland’s power-sharing arrangement and protect the Good Friday Agreement. On all three fronts, however, it is as likely to make things worse — all while damaging Britain’s international reputation and further straining relations with its largest trading partner.

Perhaps the calculus is that things will cool down by the time the next election rolls around — the stalled Northern Ireland assembly will be purring again, EU feathers smoothed and frictionless trade achieved. In the meantime, a bruising fight serves as a useful distraction from Johnson’s other troubles and revives his ties with Brexiteers.

If so, it’s high-risk gambit, and one that feels both desperate and lacking in consideration for the people of Northern Ireland that the bill is ostensibly designed to help.

Johnson described the bill as a little “bureaucratic simplification”. In fact, it’s far-reaching and more significant than had he triggered the famous “Article 16” that allows parties to suspend parts of the Northern Ireland Protocol. The EU understands it amounts to a shot across the bow; the bill has a long way to go before it wins approval and even that is not clear.

The legal justification for the bill invokes the arcane “doctrine of necessity” — the idea that action is forced by the lack of an alternative and the urgency of the situation — and the government claims that the protocol is undermining the Good Friday Agreement. But the doctrine generally requires “grave and imminent peril”, and that is hard to argue here.

The protocol has introduced some frictions, costs and inconvenience to trade between Great Britain and Northern Ireland. But it has also protected Northern Ireland from many of the vagaries of Brexit. Its economy is outperforming the rest of the country, thanks to the protocol, which kept it in the EU’s single market for goods trade. Its businesses largely support the protocol and it has just held peaceful local elections. Irish government statistics show exports from Northern Ireland into the Republic growing strongly, while overall trade between Britain and Ireland was down 13% in 2021.

Yes, the EU rather oversold its earlier proposals for flexibility. But the reality is that a substantial portion of the protocol’s required checks have not been implemented, and the consensus view is that many of the temporary concessions would become permanent.

It’s hard to see the EU giving in to a set of unilateral demands imposed through a breach of the protocol. Brussels understands that the prime minister’s days could be numbered. Why waste any concessions on Johnson?

That’s a shame because there are good arguments for improving the way things are working. Only a small portion of the goods (one-sixth is the government figure) entering Northern Ireland from Britain are destined for the EU’s single market. The government’s idea of a green lane for trusted traders with goods destined to stay in Northern Ireland — with spot checks and strict penalties (including criminal charges) for those found in violation — and a red lane for customs controls and checks on goods destined for the EU is reasonable.

Some measures in the bill are more problematic. Removing the EU’s right to conduct inspections, for instance, is unlikely to fly. And having a dual regulatory regime, allowing businesses the choice of following either UK or EU standards for goods placed in Northern Ireland, invites confusion and would be an enforcement nightmare.

The bill also seeks to remove EU controls over state aid measures involving taxation and spending. No doubt, the government would like that, but EU market access comes at a price, so it’s hard to see how that will pass muster. And while the complete removal of the EU’s Court of Justice from overseeing disputes will please hard-core Brexiteers, it is of little concern to Northern Ireland voters and will just anger the EU.

The EU also has a strong interest in cross-community support in Northern Ireland and a successful implementation of the protocol, which is motivation for finding greater flexibility. The only way to get there, however, will be a negotiation in which the EU has the stronger hand.

So far, the list of critics includes legal experts, the European Commission, Democratic lawmakers in the US, the German government, the Irish government, and many Brexit supporters including a fair number of Tory politicians. A majority of members of the Northern Ireland Assembly sent a letter to Johnson on Monday saying the bill “flies in the face of the expressed wishes of not just most businesses, but most people in Northern Ireland”.

Northern Ireland’s Democratic Unionist Party, which had left the power-sharing arrangement in protest at the protocol, said it was reserving judgment. That should come as no surprise — the DUP is never impressed. It will hold out for more, though it always seems to get less.

The alternative to negotiating over existing problems is a trade war, which should be unthinkable especially in the context of the current geopolitics. Maybe Johnson’s gamble is once again that brinkmanship brings results. If successful, it leaves Global Britain looking like an empty slogan. But the bigger risk is that more than reputation will be lost here: while the EU stands to lose if tensions spill over into retaliation, it is the UK — the worst-performing advanced economy — that will suffer most.

On Monday, the UK prime minister barely survived a confidence vote, with more than 40% of his MPs against him
News
2 weeks ago
Next Article

1.
Google not final judge about whether computers ...
Opinion
2.
Oil world’s smoke and mirrors laid bare by Saudi ...
Opinion
3.
Pilot project: how to get aviators to speak up ...
Opinion
4.
MARK GILBERT: Central Bankers clueless in fight ...
Opinion
5.
The West has work cut out winning back support of ...
Opinion

1.
Google not final judge about whether computers ...
Opinion
2.
Oil world’s smoke and mirrors laid bare by Saudi ...
Opinion
3.
Pilot project: how to get aviators to speak up ...
Opinion
4.
MARK GILBERT: Central Bankers clueless in fight ...
Opinion
5.
The West has work cut out winning back support of ...
Opinion