Rand at risk of volatility as Bank starts policy change

Reserve Bank is shifting to a surplus system from its current deficit set-up, meaning commercial banks will be able to hold and earn interest on excess reserves

A change in the way the Reserve Bank implements monetary policy may lead to greater volatility in the rand.

The transition starts on Wednesday night and will see the central bank shifting to a surplus system from its current deficit set-up, meaning commercial banks will be allowed to hold and earn interest on excess reserves. The Bank will also introduce measures to prevent lenders from hoarding liquidity, and thus help maintain an interbank money market, similar to the “tiered floor” framework used by the Reserve Bank of New Zealand and the Norges Bank.

While the change won’t affect the central bank’s inflation target or interest-rate decisions, it may make it easier to speculate in the rand, resulting in wider price swings during times of stress. Elevated rand-dollar basis-swap rates since the pandemic have made it expensive to short the rand.

“The currency basis will contract, making it cheaper to short the rand,” said Michelle Wohlberg, a Johannesburg-based fixed-income analyst at Rand Merchant Bank. “This could result in volatility in risk-off bouts.”

The rand has been less volatile this year than a host of peers — including the Turkish lira, Polish zloty and Brazilian real — even as risk assets came under pressure amid rising global inflation and policy tightening, concerns of a slowdown in China, and Russia’s war with Ukraine. The currency’s historic volatility versus the dollar has risen 63 basis points to 14.66%, the seventh highest of the 23 developing-currencies monitored by Bloomberg.

In a published paper addressing concerns about volatility, the Reserve Bank said managing the risk would require “caution and vigilance”, both during the transition to the new framework and in moments of acute market pressure. SA is the first emerging-market economy to adopt the tiered-floor framework.

“The risk is assessed as modest and does not represent a major objection to the concept of the new monetary policy implementation framework,” the Bank said. “That said, the exchange rate may prove to be one area where South Africa’s status as an emerging market yields a different experience to those of advanced economies which have used floor-style systems.”

The Bank has “a long track record of tolerating FX volatility” and inflation expectations are anchored, and therefore not highly sensitive to exchange rate fluctuations, the paper said. 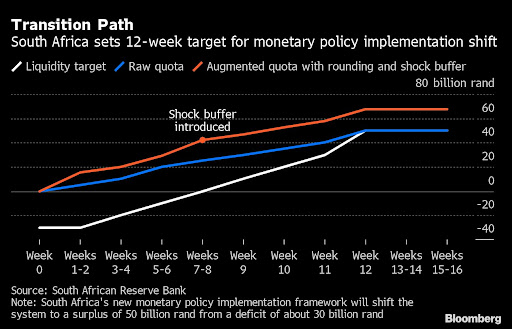 A change in the way South Africa’s central bank implements monetary policy may lead to greater volatility in the rand. Graphic: BLOOMBERG

Soaring inflation and deteriorating global growth prospects dominate sentiment, with focus on how aggressive hikes will need to be to rein in ...
Markets
3 weeks ago