ANDREA FELSTED: Jubilation will be brief as UK celebrates 70 years of queen’s reign 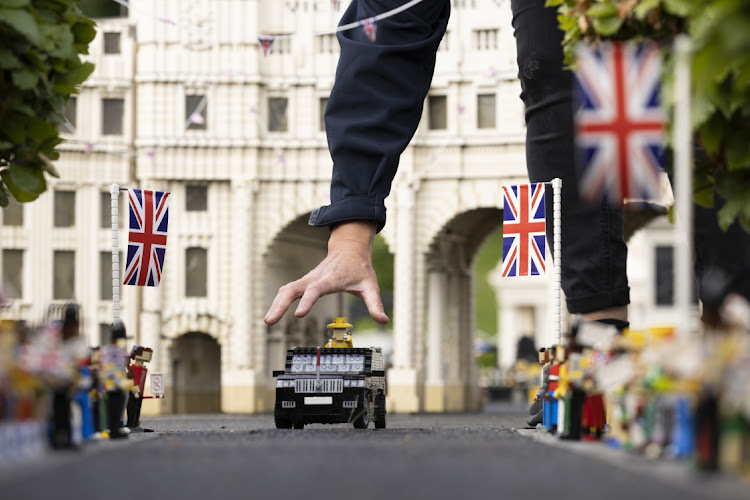 A model maker places a model of the Queen on a representation of The Mall during a Queen’s Platinum Jubilee photo call at Legoland Windsor on May 31 2022 in Windsor, England. Picture: GETTY IMAGES/DAN KITWOOD

The bunting’s out, and the Victoria sponge is on the Union Jack platter. But don’t count on the Queen’s Platinum Jubilee lifting consumers as much as past Royal celebrations have.

Though Brits are set to mark the occasion — commemorating 70 years of Queen Elizabeth’s reign — with a four-day weekend, the UK’s gloomy economic backdrop means any feel-good factor may be short lived.

After two years of Covid-19 restrictions, the bank holiday will be a time for large gatherings with friends and family. That means greater demand for attire — one needs the right dress or suit for those garden and street parties. When Prince William married Kate Middleton in April 2011, the flurry of events sparked a rush for new outfits, according to British retailer Next.

It helps that fashion is having a moment, as women are ditching their pandemic sweatsuits and spending on trendy going-out wear. The current crop of floaty dress styles works well with sneakers — handy for outside events — but those seeking more formal footwear could give sales a boost too. High heels might be returning with a vengeance.

All those parties also mean more demand for food and drink. The Diamond Jubilee in 2012 generated a 10% increase in supermarket sales in the week leading up to the festivities, according to data provider Kantar. This time around, Brits are expected to stock up on barbecue foods — which also tend to be higher margin — as well as on alcohol and soft drinks. At the 2012 Jubilee, sparkling wine sales more than doubled from the year earlier, according to Kantar, and the tipple is even more popular today than it was 10 years ago.

Consumers will also be reaching for indulgent desserts and cakes, either baking them from scratch and raising demand for supplies, or buying them from a shop. Wm Morrison Supermarkets has seen decorations, its Clarence the Corgi cake and its Victoria Sponge — renamed the Elizabeth sponge — all sell well. Tesco said it expected Brits to spend on Scotch eggs, scones, gin and party hats.

Meanwhile, pubs have been granted an extension to remain open until 1am from Thursday to Saturday. With many companies’ paydays hitting at the same time, this could be a big weekend for bars and restaurants, which could give a much-needed upswing after a dip in trade following Easter.

Springboard, which tracks shopper numbers, estimates that foot traffic will increase 8% across all UK retail destinations this week, compared with the week earlier. High streets are predicted to lead the way, with a 10% advance, also probably thanks to schools’ half-term holiday.

However, the UK shouldn’t expect a lasting lift to consumer confidence or to retail and hospitality.

For a start, many people have taken the two-day bank holiday as an opportunity to get away. With pent-up demand for leisure travel, especially to sunnier climes, a large chunk of the population is expected to be out of the country during the festivities.

It’s worth remembering, too, that past Royal occasions have kicked off big summers of sport. The Diamond Jubilee was followed by the Olympics. In 2018, the World Cup came hard on the heels of the marriage of Prince Harry and Meghan Markle. That year was also blessed with a heatwave to get people socialising outside and splashing out on shorts and suntan lotion. This year, the World Cup won’t start until late November.

But perhaps the biggest dampener on the celebrations is the cost-of-living crisis. Prince William’s wedding, the Diamond Jubilee and the Olympics occurred as Britain was emerging from the financial crisis. Perhaps that’s why consumers felt comfortable treating themselves.

The economic backdrop now is dark. Inflation means rising prices for that celebratory shop, which could well dent how much Brits put into their baskets. For example, the average amount spent on a bottle of sparkling wine in 2012 was £5.20 ($6.56), according to Kantar. Now it’s £7.05.

Of course, the situation could be saved by soaring temperatures. Nothing lifts the British spirit like a bout of hot weather, although right now the forecast looks mixed.

While the government’s promise of winter fuel support has eased some concerns about spiralling living costs, conditions are likely to still become more challenging in autumn, as people turn their heating on and lockdown savings get depleted by summer holidays.

Add in rising borrowing costs, and even if the Jubilee does get shop and restaurant tills jingling this week, it will probably mark a last hurrah rather than a sustained surge in spending.

The increase is more than double the pace of basic wage growth, squeezing consumer spending power at the sharpest pace on record
News
2 months ago
Next Article