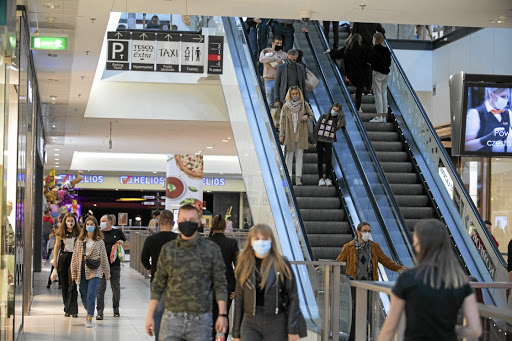 For the past year, pretty much every retail and consumer sector has been winning.

Stay-at-home trends hadn’t completely faded, so people were still spending on baking supplies and DIY tools. At the same time, cities and towns were opening back up, and shoppers were buying clothes and beauty products (teeth whiteners, anyone?) with a vengeance.

Now, the good times for retail are coming to an end. But it’s not entirely clear whether this is due to changing consumer habits — i.e. the “Great Rotation” away from pandemic habits to those associated with open economies — or to soaring inflation.

That makes it very hard for retailers, investors and policymakers to know what’s going on with consumers and household balance sheets.

Some categories are clear victims of the pivot from pandemic trends. Peloton Interactive, for example, went into a backspin as its riders returned to the gym. Consumers have also moved away from online shopping as restrictions on physical stores have eased, dampening digital sales on both sides of the Atlantic.

Others are clear reopening winners. Estee Lauder saw a make-up “renaissance” around the world even as lockdowns in Shanghai disrupted shipments and it cut its guidance.

But some sectors are more difficult to decipher.

Take streaming. Netflix lost 200,000 subscribers in the first three months of 2022, the first time it had shed users since 2011, and projected that it would shrink by another 2-million customers in the second quarter. You could blame more nights out for a slowdown in binge-watching. But perhaps rising prices for rent, food and gas are the culprit — a Netflix subscription could be one of the easiest things to cut from the budget, particularly if increasingly expensive takeaway is being ditched too.

Home goods present another conundrum. Consumers splashed out on their surroundings when they were spending much of their days inside. But how many times do you need a kitchen refresh? It makes sense that the sector would see softer sales after the pandemic.

However, home goods are also big, expensive items, which are the first things consumers cut back on when budgets are squeezed. These items have also gotten even more costly, as they tend to be bulky and take up more room in shipping containers.

Target reported the same: it saw a sudden slowdown at the beginning of March as Americans were grappling with rising food and fuel prices. This affected major purchases such as televisions, kitchen appliances and outdoor furniture. Instead, the retailer said consumers were focusing more on small, decorative touches, such as candles and pictures. While this may reflect home-makeover fatigue, it’s also notable that these items are much cheaper.

When it comes to clothing, the interplay between consumer rotation and retrenchment is even more complex.

While retailers have seen weaker demand for clothing, this has been led by reduced interest in casual apparel. Shoppers are still willing to splurge on new shoes or special-occasion dresses. Department store Kohls, which has made athleisure and casual style a cornerstone of its strategy, is working to add more fashionable pieces to its inventory. A travel revival, meanwhile, is driving demand for luggage and bikinis.

There are some signs that changing consumer habits are more about inflation than the Covid-19 cycle. For instance, McDonald’s said late in April that it was seeing smaller orders and some trading down to cheaper items. Kohl’s said it was seeing some of its customers put less into their baskets.

Across the board, more shoppers are choosing less expensive private-label brands over household names. That’s a classic strategy for dealing with higher prices. Meanwhile, the slump in consumer confidence indicates that the shifting demand patterns may be more about retrenchment than a reallocation of resources to areas such as travel and entertainment.

Either way, retailers need to figure out what is going on — and fast.

They will soon be ordering for the peak winter-holiday spending season. A miscalculation could leave them short of in-demand items or with too much stock of things shoppers no longer want. Walmart and Target are already struggling with stuffed inventories after loading up on goods during last year’s shipping disruptions.

Retailers and consumer goods companies also need to factor in that supply-chain bottlenecks have not gone away. Target said supply remained “spotty”. Some companies, including Nike, still have a high proportion of goods in transit. Others may be forced to place their holiday orders earlier than usual, given the continued disruption from lockdowns in China. That increases the risk that more merchandise will arrive just as consumers are reining in their spending.

How groups navigate the next six months will have a bearing on the broader economy.

A cooling consumer plus bloated inventories will likely mean a bumper Black Friday — big discounts could offset some of the upward pressure on prices from food and fuel. Too much caution, though, would usher in the same sort of supply shortages we saw during the last two holiday seasons. Remember that some of the scarcity at the end of 2020 was because store chains placed very conservative orders six months earlier, amid the first wave of the pandemic.

The sentiment from CEOs this earnings season has been that they “feel good” about the future. Given all the uncertainties they face, they probably shouldn’t.

Farmers across the world face rising feed and energy costs, while drought and disease compound their woes
News
1 month ago