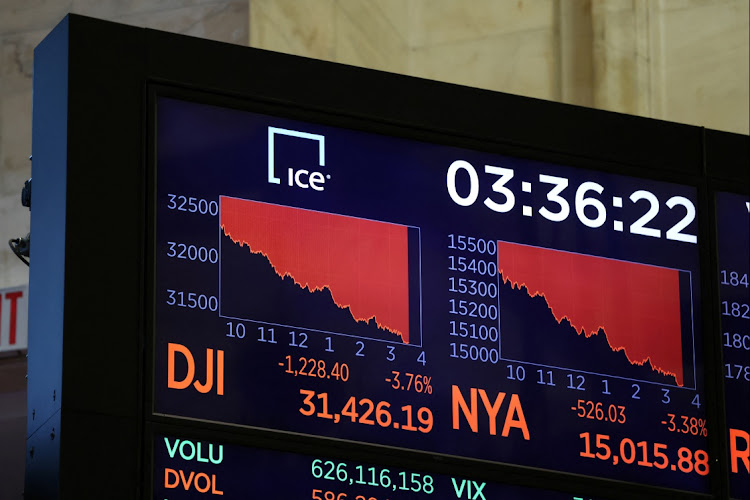 The Dow Jones Industrial Average is displayed on a screen at the New York Stock Exchange in Manhattan, New York City, US. File photo: REUTERS/ANDREW KELLY

The abysmal performance of businesses that have gone public by merging with special-purpose acquisition companies (Spacs) has emboldened the US Securities and Exchange Commission (SEC) to beef up investor protections and disclosure requirements.

Spacs were touted as a shortcut to a stock-market listing and a way for retail investors to gain access to promising start-ups. But the hype and haste have often sidetracked due diligence and financial controls. The promise has given way to losses and, in some cases, lawsuits. An index of 25 companies that became public by combining with a Spac has plummeted more than 75% from its peak in February 2021.

When financial historians require a poster child for the Spac boom and bust — echoing Pets.com in the dotcom era — they’ll be spoilt for choice, but may end up nominating View.

The “smart-window” manufacturer’s disastrous $1.6bn merger with a Cantor Fitzgerald-backed Spac illustrates why reforms are long overdue. Already reeling from an accounting scandal that blew up within months of the Spac deal closing in March 2021, View last week warned it risked running out of cash. The shares extended their decline to 93%, making it the second-worst performing large Spac deal from the past two-and-a-half years. The cast of institutions involved with the company and its ill-fated blank-cheque transaction — Cantor, Goldman Sachs  Softbank, Credit Suisse and the now-insolvent Greensill Capital — reads like a game of tech-bubble bingo.

To recap, View manufactures glass panels with an electrically charged coating that automatically tints when the sun shines, obviating the need for window blinds.

The Silicon Valley-based company has racked up about $2bn of losses since its inception more than a decade ago, and it has negative gross margins — a posh way of saying its smart windows cost more to build than they sell for.

Yet the Spac delivered $815m in gross proceeds, and in November 2020 it confidently predicted View would require “no additional equity capital” before achieving positive free cash flow. However, View said last week its ability to remain a going concern was in “substantial doubt” because its $200m of cash would not last another 12 months. Whoops.

And as View hasn’t filed earnings reports since May 2021, it risks having its shares delisted from Nasdaq at the end of May. The hiatus stems from View’s disclosure in August of accounting irregularities related to anticipated repair costs. The inaccurate warranty accruals forced the resignation of its CFO in November. The more realistic liability calculation far exceeded the company’s modest annual sales. “Uncovering an issue with the functioning of our finance and accounting organisation is painful,” View’s CEO Rao Mulpuri wrote in a November letter to employees, adding he took “full ownership” of the problems.

The warranty review is complete, and no further material errors have been identified. Yet despite assurances of “substantial progress” the company still hasn’t published restated accounts for 2019 and 2020, nor the accounts for the last four quarters. Whoops again. View did not respond to requests for comment.

After sinking more than $200m into the Spac transaction, Singapore’s sovereign wealth fund, GIC, must be furious. Retail investors who piled into the stock are also licking their wounds. Not surprisingly, some have filed a class-action lawsuit.

Others have only themselves to blame. The SoftBank Vision Fund injected $1.1bn into the company in 2018 — one of a long list of ill-advised investments in capital-intensive property-sector firms (You’ll recall WeWork and Katerra, which also imploded). SoftBank remains View’s largest shareholder, with a 30.5% stake.

Rather eye-catchingly, a big chunk of the Spac proceeds pretty clearly went to repay a $250m high-interest credit facility provided by another troubled SoftBank investment, Greensill Capital. The loan provider isn’t identified in the Spac prospectus, but the size is similar to the exposure reported in January 2021 by a Credit Suisse supply-chain fund for which Greensill sourced assets. The loan was repaid the same month Greensill filed for insolvency. The Swiss bank can count itself fortunate, as other risky Greensill lending has proven much harder to recoup.

Another dollop of the Spac’s proceeds went towards $44m of fees for the banks and law firms thatworked on the deal. Goldman Sachs was View’s merger adviser and helped recruit investors for a separate $440m pot of money that backstopped the Spac transaction. Meanwhile, Cantor Fitzgerald bankers were hired to advise its own Spac — a regrettably common conflict of interest in Spac-land. (Cantor’s CF Acquisition Corp II is one of at least eight Spacs it has created. Cantor ranked third in 2021 in Bloomberg’s Spac adviser league table, behind Citigroup and Goldman).

In fairness, Cantor disclosed the potential conflict, and the SPAC deal was struck at a lower valuation than SoftBank ascribed to View in 2018. Cantor also had more skin in the game than most Spac founders, at least initially. The receipt of one-third of its free sponsor shares (once worth $125m but now almost worthless) was subject to its reaching now-likely unachievable stock price targets. And some of its advisory fees were paid in shares rather than cash. Cantor also invested an additional $50m in the transaction. It’s not clear if Cantor still owns as much View stock. A Cantor filing this week reported it owned just 8-million View shares at the end of March, a more-than 50% reduction. It declined to comment.

Like most Spacs, it didn’t obtain an independent fairness opinion on the deal value. That’s something the SEC’s proposed rules would effectively require in future Spac transactions, along with forcing banks that underwrite Spac IPOs to have legal liability for information in the prospectus, including financial projections.

It’s a pity, too, there wasn’t an independent underwriter in this instance as the quality of the Cantor Spac’s preparation is being questioned by disgruntled investors who went to court in February to demand it hand over information on its diligence.

Its plight highlights why companies need to have robust financial controls before they go public and why we need gatekeepers with full legal responsibility for Spac disclosures. The SEC’s reforms come too late for View investors but may help avert another similar blow-up.

Facebook, Netflix, Zoom and others are being reassessed by investors. But they will rise again.
Life
1 month ago
Next Article