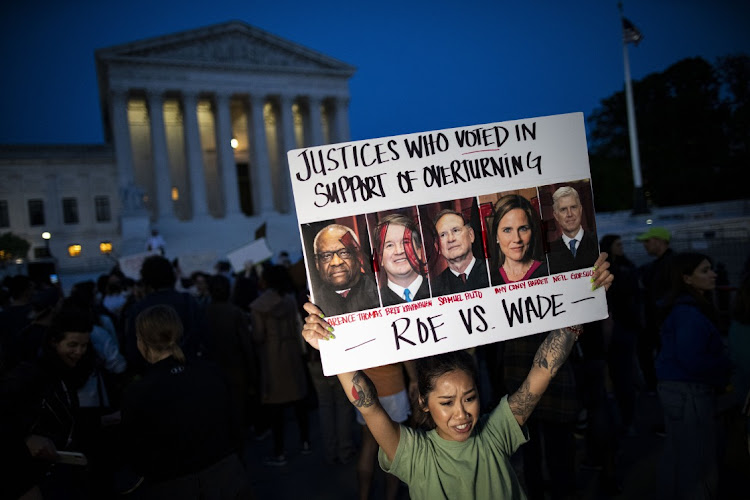 Abortion rights demonstrators during a protest outside the US Supreme Court. Picture: BLOOMBERG/AL DRAGO

In the now-famous leaked draft abortion ruling, US Supreme Court justice Samuel Alito alludes to the tsunami about to be unleashed. “We do not pretend to know how our political system or society will respond to today’s decision overruling Roe and Casey. And even if we could foresee what will happen, we would have no authority to let that knowledge influence our decision.”

In other words, the court can break the half-century-old Roe vs Wade abortion settlement (and the Planned Parenthood vs Casey decision that reinforced it), but it will be on everyone else to pick up the pieces. The political impact — especially for the midterm elections — is hard to predict, but one consequence is entirely foreseeable: A decision to allow abortion bans will widen already stark health inequalities in the US.

Removing access to abortion will have consequences for women’s health in two broad categories: among those with unwanted pregnancies who go on to give birth, and among women who seek abortions despite the inevitable new laws restricting them.

If the result of a ruling is reduced access to abortion, then there is an even more urgent need to address the country’s appalling levels of maternal mortality, which are the highest among developed countries. Women are 14 times more likely to die in childbirth than they are through a legally induced abortion. Maternal mortality in Mississippi, the state whose policies are at the heart of the case before the supreme court, is even worse than the national average. Black women are more than three times more likely to die of pregnancy-related causes than white women.

Reducing maternal mortality isn’t rocket science. While the US has plenty of obstetrician-gynecologists, it has an insufficient number of midwives and other key providers of maternity care who are recommended by the World Health Organization.

Another fix would be postpartum health visits. In the UK, the National Health Service sends a healthcare visitor to homes after a birth, to check in on mothers and their babies, provide support with breastfeeding and offer advice on sleeping and vaccinations. The US — where more than half of pregnancy-related deaths occur after delivery, and where one in five deaths occurs between one and six weeks postpartum — is the only major country not to offer universal healthcare provider home visits.

The lack of guaranteed paid maternity leave also heaps stress on many new mothers, compounding postpartum pressures, and this falls disproportionately on the most vulnerable. While maternity leave varies around the world, the US is alone among advanced countries in its stinginess. Norway offers 91 weeks of paid leave, France gives women 42 weeks, Canada 51 and Australia 18.

The Affordable Care Act passed under Barack Obama’s presidency improved maternity-care cover, but women can still face high out-of-pocket costs, depending on their insurance and where they live. Nearly half of all US women report problems paying their medical bills and one-third skip care because of costs, compared to only 5% in the UK.

Women who seek out abortions are disproportionately likely to be young (the majority are in their 20s), live below the poverty line and have at least one child to look after already. Poorer women who have children are more likely to experience financial stress related to medical care with knock-on effects for maternal and childhood health and also future outcomes, whether in terms of financial earnings or educational achievement.

Unintended pregnancies are associated with higher health risks for both mothers and babies in poor and rich countries. Women with unplanned pregnancies tend to delay accessing prenatal care, leading to missed warning signs, nutrient deficiencies and other risks. They are more likely to suffer depression, and their babies are at higher risk of complications and deficiencies from maternal drinking and smoking.

And it’s not clear that restricting abortion will curb it. In countries where it is restricted, the percentage of unintended pregnancies ending in abortion has steadily increased. Globally, abortion rates remain remarkably constant even where it’s prohibited.

The overturning of Roe vs Wade would pose risks for women who are determined to go through with abortions. Some will do so in clandestine, unregulated clinics or through purchasing medication online. There will be ample opportunity for exploitation and abuse.

“We will, undoubtedly, see an increase in deaths caused by unsafe abortion, risky and unwanted pregnancy, and children abused in foster care systems,” wrote Columbia University professor Terry McGovern in the British Medical Journal in February, anticipating the possibility of a reversal by the supreme court. The biggest risks come in states with worse records on maternal and child health, for the most disadvantaged communities, and for black women in particular.

Since that landmark 1973 ruling, the debate over abortion has been myopically focused on the issue of where rights reside — whether principally with the foetus or with the mother. That has enabled the US to ignore the many ways in which both women and babies are underserved. If Alito’s judgment stands, his disavowal of responsibility will ring hollow given the huge stakes and long precedent. Health among the most vulnerable will suffer unless radical measures are taken to improve access to healthcare and maternity support.

Tshinondiwa Ramaite, a gender policy adviser at the reproductive health organisation Ipas, explains how to spot unlawful abortion providers on the ...
News & Fox
1 month ago

Based on earlier oral arguments, the court’s conservatives seem poised to undermine or even overturn the 1973 Roe v Wade ruling that legalised ...
World
3 months ago